Yes, it’s Madagascar’s number one beach destination, but Nosy Be and its surrounding islands remain paradise in the buff. Luxury doesn’t always mean electricity or even a good mattress here, but it’s this exact lack of modern fluff that makes it so appealing in the first place — Nosy Be is refreshingly void of bling. And although Nosy Be’s beaches and resorts don’t look as fantasy fulfilling as some in the Caribbean or Croatia, they win major points for tranquility, sparkling clear turquoise water, and quaint al fresco restaurants serving seafood feasts on the sand. Plus, the air here is scented with ylang-ylang and vanilla with a pace of life that’s as slow and drawn-out as the island’s killer sunsets. So let’s begin, here are 48 hours in Nosy Be!

Since nearly everyone arrives at the port in Hell-Ville or the airport about 12km to the east, it makes sense to start your Nosy Be adventure in this area and then work your way north to Nosy Be’s best beach, Andilana.

With fields of sugar cane, rum distilleries, and single-gauge railway, inland Nosy Be has a faintly Caribbean atmosphere and you should try exploring it on your morning arrival. Hit up the large Ylang-Ylang Distillery, about 3km east of Hell-Ville, first. Here you can watch the sweet smelling green or yellow ylang-ylang tree flowers distilled into an oil that is then exported to the west to scent perfumes. Ask at your hotel before heading out as the flowers are not distilled daily. At the time of research it was Monday, Wednesday, and Friday, but these things can change. Ylang-ylang trees grown on plantations around Nosy Be are easy to spot because they are pruned into rather grotesque, low-to-the-ground shapes that make picking their flowers easier. 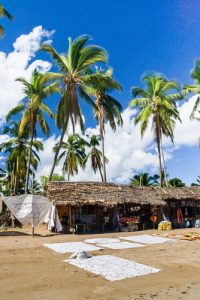 When you’ve finished with the distillery, head to Hell-Ville, at whose port you likely first arrived, for a spot of shopping before lunch. Despite the off-putting moniker (named for Admiral de Hell, a French governor of Reunion), Nosy Be’s main town is anything but hellish. Rather, it’s an upbeat, if slightly disheveled, spot where frangipani and bougainvilleas frame crumbling ruins of old colonial buildings. Sidewalk cafes bustle with backpack touting tourists sipping strong espresso, and ex-pats gather for gossip and wood-oven pizza at the all-around-favorite bar down the cracked and pot-hole rife red-earthen street.

Hit up Nandipo for lunch. This is the where yachtsmen and ex-pats mingle. Many regulars will order their first beer at 9am. For those less interested in slurring like a sailor, it does have excellent wood-oven pizzas. It also offers spontaneous live music and the best ambiance in town. Sit inside amid the cluttered wooden bar and high tables or outside in the garden. Either way, if you speak French, you’ll notice the conversation around boats.

After lunch, head north to your beach destination: Andilana, on the island’s northwest tip. It is far and away the most beautiful beach on Nosy Be, and boasts amazing sunsets. These begin around 5:45pm, and stretch on for nearly an hour. After the big yellow ball sinks directly into the darkening turquoise sea, the sky turns pink and purple, silhouetting wooden pirogues and women clad in bright sarongs walking home with the day’s catch, before bleeding into velvet black.

Consider staying at the Hotel Andilana Beach, which caters to a lot of European package tourists, but for good reason: it is the swankiest place to stay in town, and one of the only with a pool and multiple restaurants. It is also all-inclusive, so you won’t have to worry about the scarcity of food on this beach. This property needs to be pre-booked, as walk-ins are not welcome. Le Grand Bleu is the other best option. It is perched on a hill with sea views, and only about a three-minute walk to the sand. Bungalows are simple but peaceful.

Nosy Be’s crown jewel beach, Andilana, is a pearly white sand and turquoise sea paradise where the water is warm and clear as gin, and palms sway in a light wind under a big sunny blue Madagascar sky. Although it is tempting to lie out all day here, you’ll want to be in the water around 9:30am for a morning snorkel. The water off Nosy Be is famous not only for its excellent visibility – up to 15-meters on average – but also for the diverse number of marine creatures: surgeonfish, boxfish, damselfish, clown fish, yellow-fin tuna, barracuda, eagle rays, and manta rays. Every so often, you can even spot a whale among the deep sea dwellers calling this neck of the woods home.

For DIY snorkeling from Andilana Beach, enter into the water in front of the steps leading up to the Andilana Resort, then wade out to the point where the reef is located. At low tide, the water is only chest deep for all but the last portion of the trip, making it an easy intro for novices or anyone slightly scared of deep water. With big ocean fish, manta rays and even turtles, not to mention moving conchs and bright coral, there’s enough underwater wildlife to keep seasoned snorkelers engaged. The reason you need to leave early for this trip is because you need to be back onshore before the tides start to come in around 11:00am – otherwise the return swim can be treacherous. If DIY snorkeling makes you nervous, join a half-day trip further offshore with Plongee Toukoul, who you can also dive with. Most trips leave early enough to allow for two dives (or snorkels) and then return in time for lunch.

Try to time your visit with the weekend, as Andilana ignites on Sundays when French expats and Malagasy from around Nosy Be come for a lazy day in the sun. Gossiping gaggles of women, dressed in bright sarongs with sunflowers painted on their café-au-lait faces, lay out picnics for their families in a shaded bit of sand. Young lovers and groups of teenage girls giggle and fake scream as they splash about in the warm blue sea, and old men sip bottles of THB beer leaning against the trucks of the coconut palms.

Even if you’re staying at the all-inclusive resort, you’ll want to have at least one lunch at Chez Loulou, which is right on the water and especially famous for its Sunday brunch. The seafood feast is accompanied by live music, and afterwards everyone lingers for beer, dancing, and seemingly spontaneous Malagasy jam sessions on the drums and guitar. Don’t arrive too late, or you risk missing out on food.