It isn’t so easy spotting the lemurs of Madagascar — it’s actually more difficult than spotting a lion. Besides a guide with a good eye, you’ll also need to use your legs and lungs. That’s because like travel itself in Madagascar, safaris here are a bit more adventurous than on the mainland. You can forget about driving around in custom-kitted Range Rovers, and if you want to bring a giant telescopic lens, you’ll need to be prepared to carry it for at least a half a day — and sometimes more than two. After all, you’re in Madagascar, and safaris here often mean trekking. 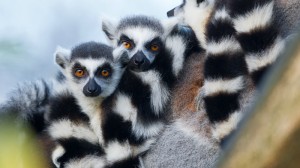 The world’s fourth largest island is also one of its most extraordinary ecosystems. Isolated from the African mainland for millions of years, it has yielded plants and animals found nowhere else on the planet. Sadly I learned while trekking in Madagascar that many of the country’s one-of-a-kind species have gone extinct in the last 1000 years, including 17 species of lemur. My guide explained that at one time the country was home to a species of lemur the size of a gorilla. The world’s largest bird, the ostrich-like elephant bird, a number of hippopottami, giant aardvark and tortoise species have also kicked the extinction bucket over the last few millennia. As a result, wildlife conservation is paramount in the country, but with an unstable political system and one of the world’s highest poverty rates, it remains a constant battle. 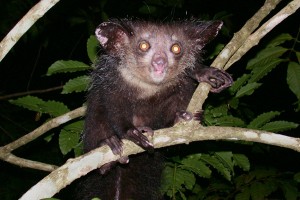 Although gorilla-sized lemurs no longer roam, the country is still home to some 50 different species, and five families of its most famous animal. Until I saw a lemur up close, however, I wasn’t quite sure what all the fuss was about. They looked cute, but surely I’d be more excited to see a leopard or a cheetah up close than spend a day tromping through the bush looking for a small cat-meets-monkey type creature. But once I saw my first ring-tailed lemur with liquid eyes that seemed to stare directly into mine before flipping his tail and bouncing away, I was hooked. Lemurs are addictive, and once you see one, you become obsessed with seeing more. And since there are so many varieties, you can spend an entire trip rambling around the countryside trying to Instagram them all.

The ring-tailed lemur is the most recognizable of the bunch — sort of the poster child for lemurs. They are also known for being able to adapt to living in exceedingly dry areas, and for engaging in territorial battles with other lemurs by waving their scent-marked striped tails. Other popular lemur species include the super-cute sifakas and indris, which are known for their leaping abilities, and mouse lemurs, which are the world’s smallest primate. Personally, I like the aye-aye. These fellows are known for extracting grubs from bark using their long, bony fingers. The black-and-white lemur is also quite cute, and known for giving loud territorial calls. And when you’ve gotten to the bottom of your must-see lemur list, look for the fat-tailed dwarf lemurs which can only be seen for half the year – they hibernate for up to six months during the cold season, according to my guide.

Beyond the lemurs, the scenery is equally appealing. It’s a trippy combination of Asia and Indonesia with a side of mainland Africa, and another side that looks like nothing else on earth. Be it the bobblehead baobobs or spiny deserts, mangrove swamps or bizarre cacti, Madagascar is home to one of the planet’s most diverse plant communities with around 6,000 species. In fact, out of Madagascar’s 4,220 tree species, 96% are endemic! Best of all, each of Madagascar’s three north-south zones comes with its own unique ecosystem featuring plants and animals not found in the others. As a result, the scenery changes constantly, providing a fascinating visual-trekking backdrop.

And if you want to trek, make sure you have the right gear. Good hiking shoes and layers are key. If you’re visiting between June and August (the winter) bring long under-wear and a light jacket, as it can be very, very cold, and you will not have access to heat at even the nicest hotel in Antananarivo. 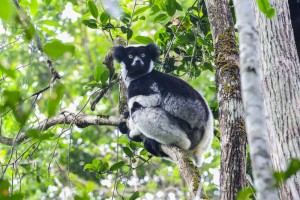 There are hundreds of treks in Madagascar, and to hike the entire country – which might not be a bad idea, considering how few roads there are – would take years. If you only have a month, I suggest traversing the Route du Sud (RN7), which runs between Antananarivo (Tana) and Toliara. It is the best-maintained road in the country, and takes you through three excellent lemur habitat areas. Unlike so many parts of Madagascar, this route is also pretty accessible and can be done relatively affordably– I hired a driver in the capital city of Tana and booked him for a week, during which time I made the thousand-odd kilometer journey south to the port city of Toliara, stopping to trek with local guides in the parks along the way. Guides are mandatory in all three of the national park’s mentioned below, and cost between Ar20,000 (for two hours) and Ar80,000 (per day for a multi-day trek), plus park entrance fees of Ar25,000 per person, per day.

The first park along the route is the Parc National de Ranomafana, which offers the chance to hike among the clouds in a pristine rainforest. There is also a great new lodge, Setam Lodge, located at park headquarters, for those who’d like to search for animals during the day and sleep in some of Madagascar’s most posh digs come dusk.

Parc National d’Andringitra is next up, and home to 14 species of lemur – more than anywhere else in Madagascar. The scenery here is pretty unique – rice paddies meet towering granite peaks – and the park is a climber’s paradise.

On the southern portion of the route is Parc National de l’Isalo, one of Madagascar’s most popular parks for good reason. It’s a marvel of evolutionary processes, with an unearthly, sometimes eerie landscape that’s home to endemic plants along with ringtail, brown, and sifaka lemurs.

This article was originally published on June 2, 2014.