In this personal account of her first-ever trip to Jozi, writer Lara Moses spends 48 hours in Johannesburg — mostly on the sightseeing bus — and learns that the city she once feared is at once fascinating and frustrating.

If you’d asked me a year ago where in South Africa I’d least like to go on a vacation, my answer would have been the city of Johannesburg – also known as Jozi or Joburg by locals. Being from Cape Town (a smaller city), the big city scared me. The constant hustle, overwhelming number of power suits, and overwhelming number of gated fortress communities are not something I was used to. And I thought the lack of a fresh sea breeze might just kill me. So when my boyfriend suggested a four-day getaway to Jozi (two days exploring the city and two days watching a soccer tournament at Soccer City), I hesitantly said yes. Even though I had serious doubts about the whole trip, I booked my plane ticket and hoped it would somehow turn out to be a really awesome experience. 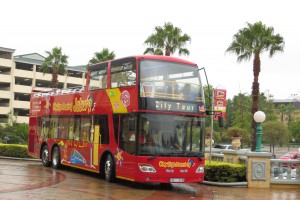 We had pre-purchased a two-day ticket on the Johannesburg City Sightseeing Bus, which departed at 9am from Park Station in Joburg, so we had to take the dreaded 6am flight out of Cape Town. Once we arrived in Joburg two hours later, we caught the super-fast and amazing Gautrain to Park Station downtown. After finding the sign outside the station we got in line with the other (mostly German) tourists, and waited for the bus. I’d been on a few City Sightseeing Buses before – you know, the red bus that tours most major cities – and find it the best way to see a city.

After a brief welcome (greetings in all 11 official languages), we headed to our next stop in Joburg’s CBD. Not only does the tour explore the heart of the inner city, but it also gives tourist an opportunity to drive through not “tourist-friendly” places – the audio clearly reminding tourist to only go into these areas with a guide. The inner-city streets are lined with hawkers and taxis that weave between cars with no respect for the law. To our amusement, and the slight fear of the rest of the tourist on bored, we even witnessed a service delivery protest outside one of the governmental buildings – a true South African experience.

The first few stops (Ghandi Square, Carlton Centre and James Hall Transport Museum) we decided to give a miss (we did our research beforehand and knew which of the 12 stops we wanted to get off at). At Ghandi Square we could see everything we want to see from the bus. Carlton Centre is best viewed on a sunny day (and it was overcast), and we were too tired to go to any museums. 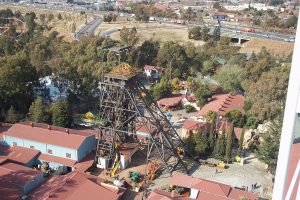 As the journey continued heading away from the city, fatigue kicked in and we knew we had to do something drastic to keep ourselves awake. Our solution: Gold Reef City Theme Park! We hopped off at the casino stop, took some touristy (and inappropriate) photographs at the huge fountain, and headed to the theme park.

As grown-ups, this is not exactly how we pictured spending our first day in Joburg, but I must admit, it was pretty fun. Because the weather was pretty horrid — overcast, occasional down pour and humid – the park was pretty empty. Besides the few teenagers bunking off school, the queues where short and we always got the best seats on every roller coaster. We spent about four hours screaming, laughing, and getting that well-deserved adrenaline rush to keep us going for the rest of the day. We then headed back to the bus – which is extremely punctual and does not run on African time – and decided to call it a day on the hopping off/on part of the trip.

The rest of the tour took us through the colourful precinct of Newtown with its graffiti-painted walls, the up-and-coming student area of Braamfontein, Soccer City in the township of Soweto, and the Nelson Mandela Bridge. We even got a glimpse into the infamous Hillbrow area – known as one of the most dangerous places in Joburg – before heading to Constitution Hill and then back to Park Station.

Rested up and ready to go, day two was filled with museum visits. I really wanted to go to the Apartheid Museum and my boyfriend to the Origins Centre. Now we could have taken our hired car and driven to these specific museums, but because we didn’t know Jozi, we decided to hop on at Park Station again. Thinking back, I wish we’d taken the car as the tour for a second time was a bit too much – same stories, jokes, traditional African music. 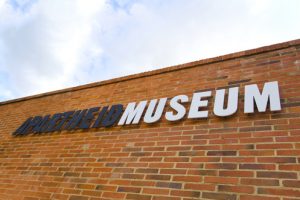 Our first stop was The Apartheid Museum. After getting our tickets (which told us what entrance to use according to our race), we quickly realised the museum was not only an emotional experience, but a physical one too. Being different races, my boyfriend and I had to enter the museum through different entrances, and we experienced things differently along our journeys. When we finally did meet back up, he sneakily took me back to show me some of the things he saw. The museum was packed with so much, I could have easily spent the whole day there. It really is a fascinating place that showcases South Africa’s surreal history. Starving, tired and slightly emotional, we left and caught the bus to our next destination.

The next few stops – the Mining District Walk and Newtown – we gave a miss and headed to the Origins Centre. By this time it was bucketing down with rain, and for the life us we could not find the entrance to the centre. There was a huge sign, but no entrance. We ended up signing in at Wits University and somehow walking through the halls of the campus until we found the museum. Cold, wet and hungry, we decided to tuck into a tasty meal before making our way through three storeys of exhibitions that is the Origin Centre. We then headed back to the bus and that ended our two-day sightseeing in Joburg.

Waking up the next morning, I realized that Joburg wasn’t half as bad as I thought it would be. The people were friendly, the constant hustle wasn’t as overwhelming and even though there was a lack of a ocean breeze, the one I got from the top deck of the bus was suffice. I also realised that Joburg is not a city for wandering — always know where you are going and how you are going to get there. As a first-timer in Jozi, taking a tour like the CitySightseeing one was advantageous as I got a small glimpse at all of the city — both good and bad — and a real feel for what it was all about.

Jozi isn’t the prettiest city – the street are littered and crowded and the air is thick and smoggy, but unlike any other city in South Africa, it has many stories — most slightly depressing, but well worth listening to. From South Africa’s historic and painful past to its uplifting struggle to freedom, Joburg has been the backdrop to some of South Africa’s most iconic stories. Boarding the bus on day one, I knew the audio tour would expose me to these stories (even thought I’d heard most of them before in history class), but what I didn’t know is how a story can change a city – even make it seem beautiful.