When I got offered a one-night stay at a trailer park called Old Mac Daddy in Elgin, just outside of Cape Town, South Africa, my head started spinning. The thought of staying overnight in such a confined space didn’t sit well. I pictured a mobile home with nothing less than the bare essentials – a bed, tiny bathroom and a bar fridge. And then there was the name: I mean, who owns this place? The South African version of Hugh Hefner? I took to Google to find out more, as one does in these situations.

Well, I’d obviously been living under a rock when it came to trailer parks, because what I found at Old Mac Daddy were pimped out, luxury Airstream trailers. Quickly my mind was changed and I got very excited to visit this unique place. 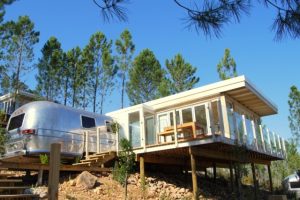 After a busy week at work, my best friend Amy and I hit the road on what was to become one of the most magical experiences of my life. Driving from Cape Town city center over Sir Lowry’s Pass (a mountain pass overlooking the suburbs), with Table Mountain in the background just as the sun turned that warm orange of sunset, was breathtaking. Over the mountain pass, the big city changed to small towns and rural living. Forests with fall-colored trees and rivers filled up the spaces between towns.

Soon we’d turned off the main road onto a dirt one, and yet again the contrasts were visible. Small towns became never-ending farms, cows lined the side of the road, and everyone greeted us as we drove past. We had officially arrived in Elgin.

It must be something about the Elgin air — or small town living, or friendly people, or open spaces — that made me feel instantly relaxed. Just as I was beginning to enjoy the scenery, Amy spotted the Old Mac Daddy sign and we turned off the dirt road into the parking area. As soon as we got out of the car we were greeted by staff who helped us carry our bags – pretty fancy for a trailer park. We then headed up to the barn, which doubled as the reception area and restaurant, where we checked in for the night. As we walked out of the barn we got to see the scale of this park: 12 trailers lining a hill, overlooking an amazing dam. At this point I’d figured out that this wasn’t your average trailer park — more like a lodge with private chalets, or a bunch of hotel rooms on wheels. The trailers even had a section built onto the front, which I later learned was a separate bathroom and lounge area.

We were then pointed toward our trailer, which was the last on the top of the hill. After walking up what seemed to be 100 (probably only 30) steps, we got to our home for the evening. The walk up those stairs was totally worth it as I looked back at the view. The sun was setting, the dam at the foot of the hill was flat, and the silver trailer glistened in the fading sun. It was absolutely beautiful. Just before the cold air got the better of me, I headed inside, but not before noticing the mailbox at the front of the trailer that read “Dirkie Sanchez.”  I vaguely knew this referred to some kind of Mexican wrestler, but what I didn’t know was that this was the theme of our trailer.

Eager to see what was inside, Amy and I skipped the tour of the bathroom and lounge area and headed straight to the trailer. What we found was unbelievable. Our bed was a wrestling ring, the walls were lined with old Mexican posters and there were wrestlers’ costumes. Before we knew it, we found ourselves hysterically laughing as we tried on the insane costumes. From the masks to the crazy sumo-style shorts, the trailer had it all. The detail in this trailer was unbelievable – from the brightly colored bar fridge, to the illustrations on the blinds, and the Sanchez family photo on the coffee table.

After about an hour of acting the fool, laughing till we cried, and taking in all the amazingness of the trailer, we headed down to the pool area (next to the barn) where a traditional South African braai (barbecue) was taking place. The smell of the meat got our mouths watering while we sipped cocktails by the bar inside the barn. Kids ran around inside as their parents enjoyed a glass of wine. We quickly followed suit and ordered a bottle of Elgin’s finest wine (from a neighboring farm) and chatted to the park manager. I always love talking to the staff at places I stay at, because I always learn something fascinating. In the case of the Old Mac Daddy, I picked up two gems. The first was that each trailer’s theme was created by a local designer who brought their own concept and creativity to it – some even hand-painted them. And the second was that everyone who worked at this amazing establishment was from surrounding rural areas, meaning that Old Mac Daddy was dedicated to training and employing locals.

After about an hour chatting away, the meat was taken off the fire and dinner was served. A buffet of everything that makes a braai delicious was awaiting us hungry guests. From chicken to chops, potato bake to pap and chakalaka (maize and salsa), we were ready to eat. We tucked into the food and didn’t stop until we were stuffed. There’s a saying in South Africa that goes “maagies vol, oogies toe” which directly translates to “tummies full, eyes closed” – and that’s exactly what we did. We then slowly headed back up the hill – with a few drunken missteps — and found our way back to our trailer. We climbed into our queen-sized wrestling bed. A few more giggles at the absurdity of it all, and we were in dreamland.

The next morning, I woke up super early, took a nice hot shower, and headed down the hill to the dam. I took an hour-long walk around the dam and watched Old Mac Daddy come to life. As the birds started chirping, an aroma of breakfast filled the air. I followed my nose, which led me to the barn, and met Amy there. We tucked into another delicious buffet breakfast before heading back to our room to collect our bags. With one final look at the view and our awesome trailer, we headed to our car and back home.