It takes just under three hours – and the drive is fantastic – to get from Cape Town to the exclusive Sanbona Wildlife Reserve. Located in the Western Cape, it is the most accessible safari destination for those whose time in South Africa is limited to the area around the Mother City –and those who don’t want to pay big bucks for a charter flight. This private reserve delivers more than convenient travel time: not only is it home to all of the Big Five, it is also hosts the world’s only free-roaming white lions. And with just three luxury lodges – a fourth, Dwyka Tented Lodge, is set to open in September — on its sprawling 54,000-hectares, it also provides a very exclusive experience.

Leave Cape Town early, as the drive to Sanbona should be savored. To reach the reserve you’ll travel through the well preserved 18th century whitewashed Cape Dutch villages and chartreuse and golden fields of the Klein Karoo and down Route 62, the epicenter Western Cape’s lesser known wine region, where you should pause at marked vineyards to sample local varietals.

From Sanbona’s main gate it is a 45-minute drive to your home for the next two nights, the posh Georgian-style Tilney Manor. Note that you are driving through the park, so keep an eye out for wildlife – from lions to elephants – and make sure to observe the speed limit. Whatever you do, don’t get out of the car.  You’ll also need to make sure you arrive at Sanbona’s main gate before 5pm in order to reach the lodge before dark – when driving becomes prohibited.

Blending posh Cape Georgian colonial manor house with traditional San culture style, Tilney Manor exudes an exclusive, exotic and very South African ambiance. With a maximum capacity of 12, in six luxurious suites, Tilney promises an up-market destination safari experience inclusive of world-class pampering and plenty of privacy. Featuring a natural muted color scheme drawing from the surrounding environment’s hues, rooms are romantic; featuring silky soft linens on comfortable beds, fireplaces for chilly winter nights and my favorite touch – creatively constructed his-and-her outdoor showers. You haven’t experienced all of life’s most intriguing nuances until you’ve taken a shower in the African bush, listening to an elephant’s trumpet or a hyena’s cackle as you scrub the day’s dust off your body.

Afternoon safaris usually depart around 3:30 or 4pm, so try to time your arrival for earlier. This will allow you time to take a quick dip in the infinity pool before heading out on your first game drive. Bordered by a river on one side and the mountains on three others, the sheer number of animals located inside Sanbona’s boundaries is less than in other reserves, especially those surrounding national parks, so you can’t expect to see massive herds of elephants here. But on the plus side, the smaller size of the park itself means you’ll have a better shot of seeing individual animals, and because this isn’t a public park, you’re safari driver will be able to take you off road to get up close and personal with the animals you do spot.

When you get back, you’ll have just enough time to shower and change before its time for dinner in the cozy dining room – the food is delicious and there is a good selection of South African wines, including some from Route 62 vineyards. Hit the sack early, as you’ll be getting up with the sun for the early morning safari.

You’ll rise at dawn and grab a quick cup of coffee and a snack before heading out with your guide. Because animals are most active in early morning and late afternoon it is imperative to hit the road before the sun gets to hot. Morning game drives last around two hours, returning you to camp in time for breakfast and a morning at leisure. 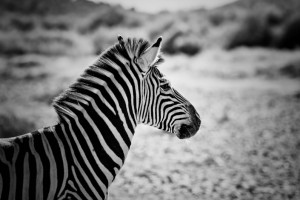 We’d suggest starting with the daily nature walk through the reserve. You’ll be accompanied by a knowledgeable guide and learn about the smaller animals that reside in Sanbona, as well as the more than 600 unique plant species located here. Nature walks are tailored to guest’s fitness levels with gentle and challenging trails both available. Make sure to ask your guide to take you to see San rock art – the reserve is home to seven different sites with drawings depicting the rituals and spiritual lives of the region’s original tribe dating back more than 3,000 years!

If the afternoon, you’ll head back out for the day’s second safari as well as sundowner drinks in the bush. That night arrange to have dinner on the outdoor patio, listening to the call of the animals. If you’re interested in learning the constellations of the southern hemisphere, and the stories the original San inhabitants spun about these distant stars, ask the staff to set up a stargazing safari, where well-versed local guides show you how to identify the constellations of the South African starry night sky.

You’ll do a final early morning safari and breakfast before checkout. Also take a final dip in the infinity edged pool and before you head back to Cape Town indulge in a holistic treatment at the excellent spa – try one that incorporates the local fynbos plant; it is said to help eliminate toxins and offer physical and mental rejuvenation.

On the way back to Cape Town, if you have time, stop in the quaint town of Montagu on Route 62, which is home to rejuvenating hot springs and exemplary Cape Dutch architecture.