Africa is a paradise for birdwatchers: Almost 2,500 bird species and 111 bird families live on the mainland of Africa and its islands, according to the African Bird Club. Topping the list of African countries with the largest number of bird species is Democratic Republic of the Congo, with 1139, followed by Tanzania (1137 species); Kenya (1080 species); Angola (915 species); Nigeria (910 species); Cameroon (908 species); and Ethiopia (816 species). Here is a round-up of 15 of these incredible birds, which can be spotted on any of the many bird-watching “safaris” available for amateurs and fanatics alike. 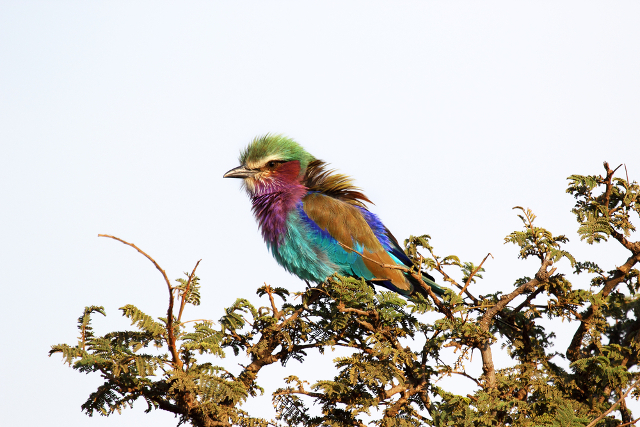 The national bird of Botswana and Kenya, the lilac-breasted roller lacks sexual dimorphism, which means both sexes look equally gorgeous. Entirely tree-perching, they are found in abundance in places where trees are plentiful. These birds are great parents too, and are known to fight off raptors and larger birds of prey in order to protect their nests. Their diet consists of insects and small lizards. 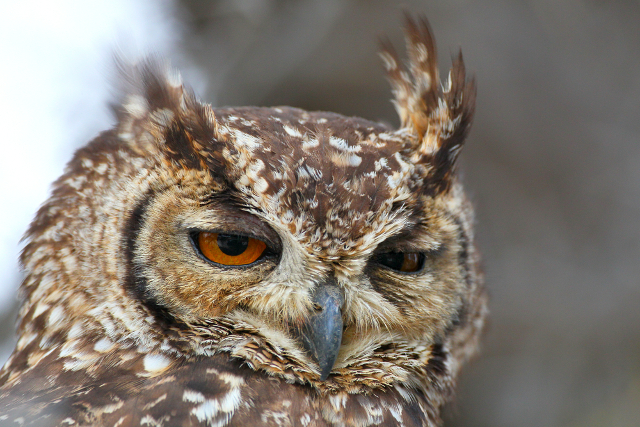 The spotted eagle owl is South Africa’s most famous nocturnal bird. As one of the smallest eagle owl species, it likes to perch atop man-made posts such as electric poles or streetlamps. This peculiar habit has unfortunately led to many owl-ectrocutions. While their eyes have adapted to low-light situations, their vision still isn’t all that great, so they rely on their keen auditory sense to hunt prey. Upon hearing rustling rodents, they silently swoop down and pick up unsuspecting prey. 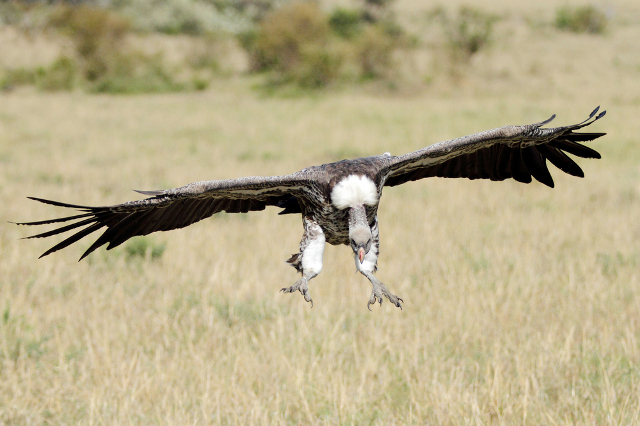 Gyps Africanus is found from South Africa to Senegal, and east to Somalia — but not in large numbers anymore. This species was listed as critically endangered in 2013. Habitat loss, hunting, diminished food sources, and poisoning have contributed to the vulture’s unfortunate decline. 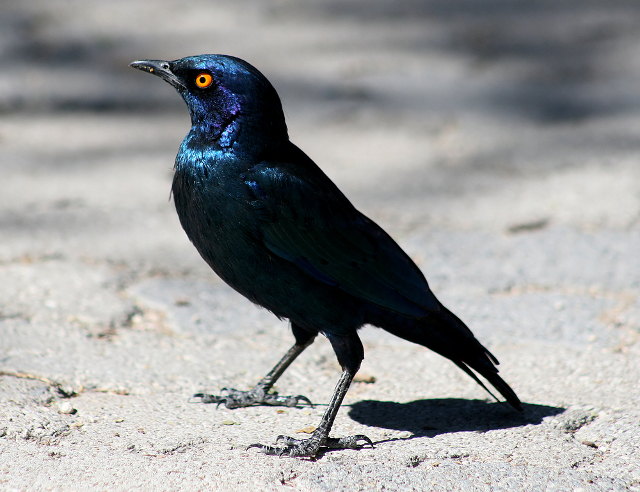 The Cape glossy starling is sometimes referred to as the “oil spill bird” on account of its unique blue-green (and sometimes purple) shiny coat. This bird, from the Sturnidae family, is found flitting around all over Africa south of the DRC. At 25 cm tall, this is an atypically large species of starling. Its big yellow-orange eyes with oversize black pupils may make it look menacing, but don’t worry, it only dines on insects. 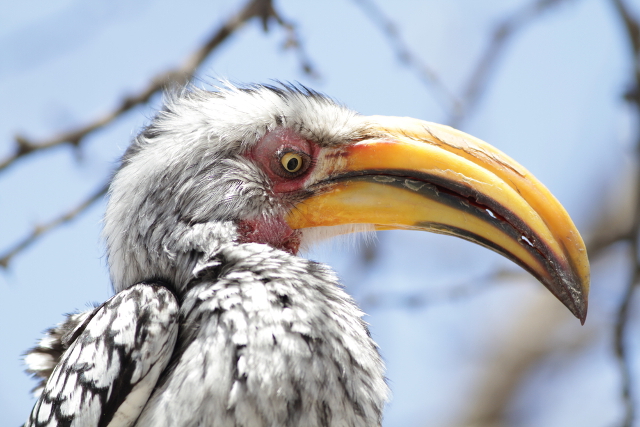 Look up in the sky! It’s a bird! it’s a plane! It’s a … flying banana? Take one look at the beak on this crazy-looking bird and you’ll know what we mean. Cackling loudly from the trees, hornbills come down to feed on insects, scorpions, lizards, or small rodents. A common resident of many southern African countries, they are very accessible to birders, and are often spotted on safaris or bush adventures. (Fun trivia tip: Remember Zazu from the movie “The Lion King?” He was a yellow-billed hornbill.) 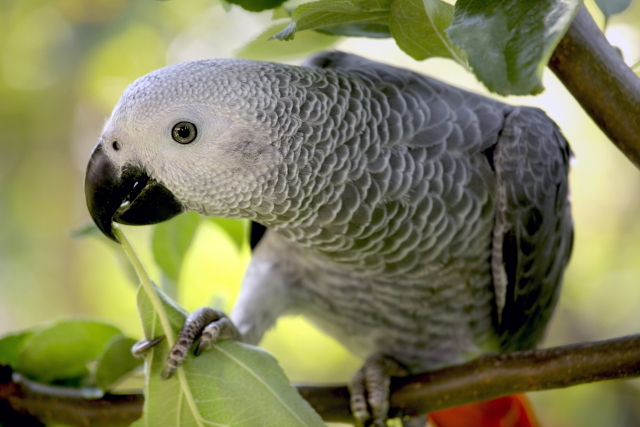 This parrot lives in steamy tropical areas from Guinea to Uganda, and south into the Democratic Republic of Congo. Medium sized, at 33 cm in height, it feeds mostly on fruit and herbs, though sometimes eats insects. Unfortunately, it faces extinction due to encroachment on its habitat and its popularity as a pet (they are very good at mimicking human speech). 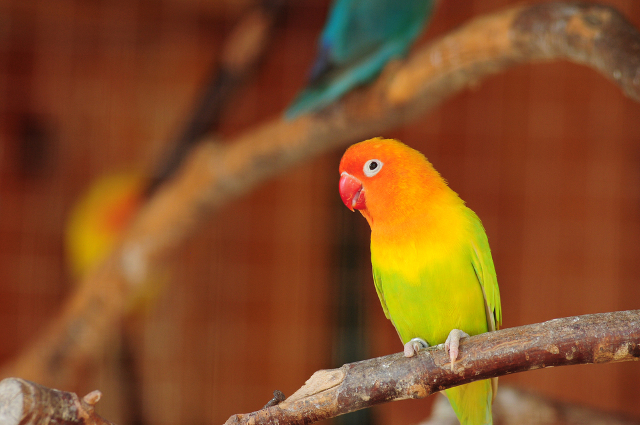 Here’s another parrot with a wide color palette–it’s a rainbow-sherbert bird! This species is concentrated in north-central Tanzania, and is so named because of its fiercely monogamous devotion to a single life partner. Unfortunately, it’s now endangered because of human actions. Thousands were captured for sale as pets in the 1970s and 1980s, and farmers kill them because they consider them pests (flocks of hundreds have been known to destroy crops). They are smaller than the grey parrot and not as much of a sociable gabber. 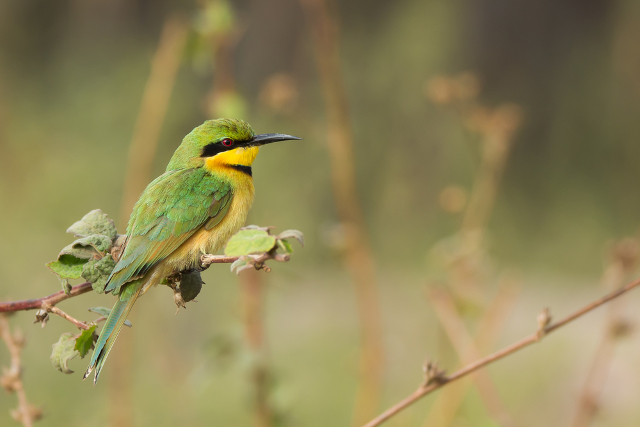 These adorable little critters are found across the African continent as well as in Asia, Europe, and Australia. They are part of the meropidae family of birds, which contains 27 different species, 20 of them being bee-eaters. Africa’s own blue-breasted bee eater is rich in fuzzy yellows, greens and blues, has round wings, and is truly a connoisseur of bees and wasps, always catching them in mid-flight. To avoid stings, bee eaters repeatedly smack their quarry until its stingers and venom are extracted. 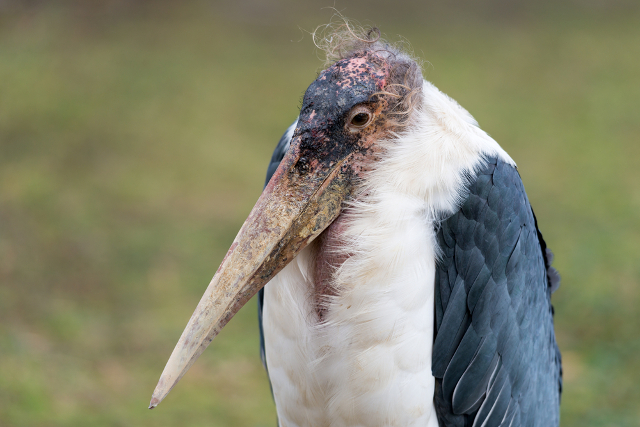 A little unsightly, a little gawky, but one of nature’s more interesting creations, the marabou stork is found all over Africa, especially in wetland/aquatic areas and places with lots of garbage. Standing 1.5m tall (almost five feet), they’re named after the soft white feathers all over their bodies. The reddish-pink pouches under their throats are integral for making mating sounds. They also pant loudly when it’s hot. If there’s a brush fire, you can be sure to see a marabou there, dining on the dead carcasses of animals that didn’t make it (yum!). 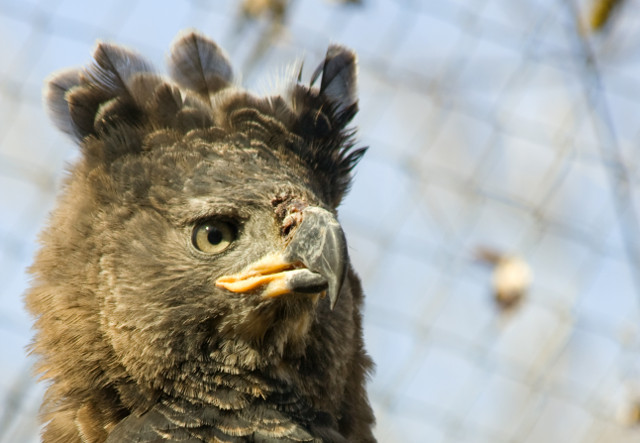 This bird of prey soars above the savannas of sub-Saharan Africa like a boss, swooping down to feed on small monkeys and other pint-sized mammals. Weighing around eight pounds and with a wingspan that can approach six feet, it is a dominant winged creature that can hold court with lions. 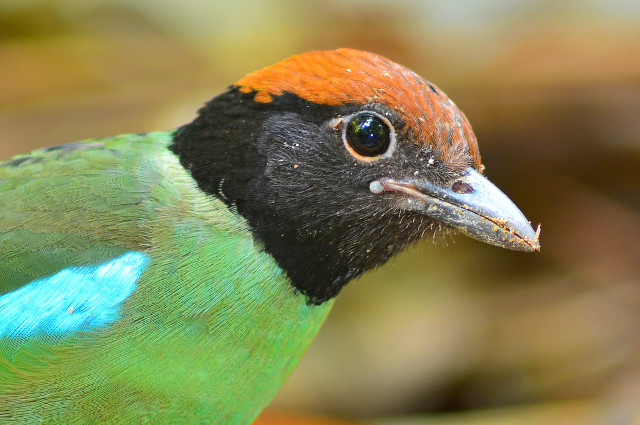 This little bird is a birdtwitcher’s dream to see. But despite its relatively common status in central African countries, it is hard to spot. It resides in lowland tropical forest and is exceedingly well camouflaged. 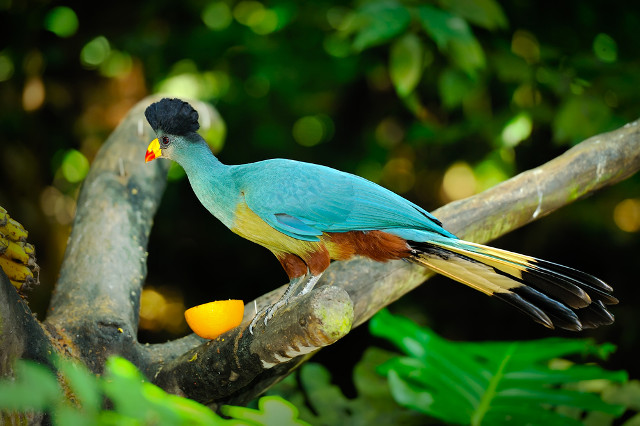 This stunningly beautiful bird is certainly one of the most exquisite birds found in Uganda. Unfortunately, they are actively hunted for their meat and feathers. It lives mostly in the high canopies of the tropical rainforest. 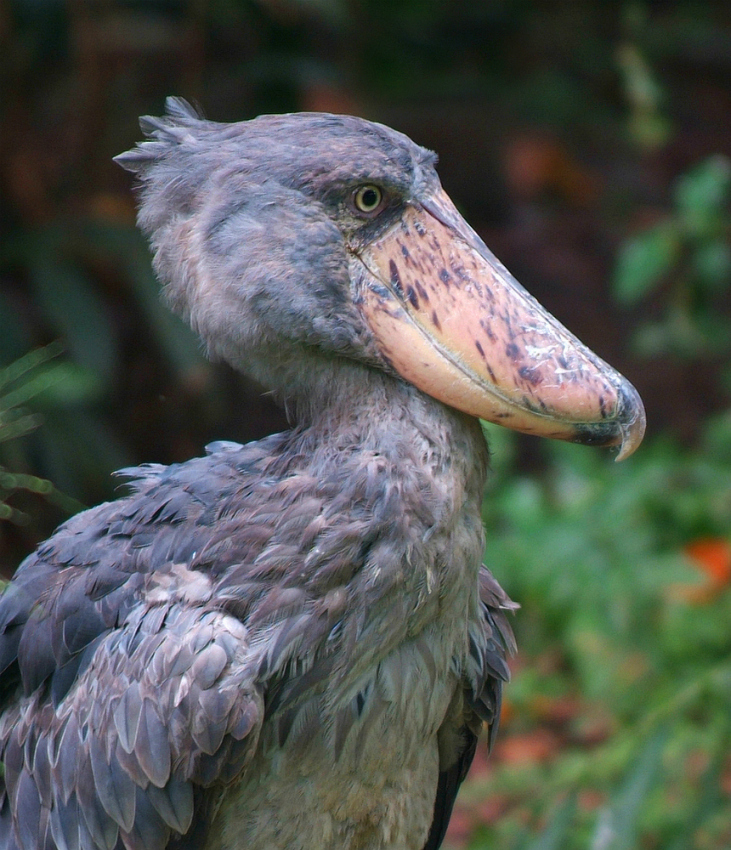 Endemic to Africa and frequently found in Uganda, this is a large stork-like bird, with a dull blue colouring. It’s rare to get a glimpse of this clumsy giant, making it ideal for birdwatchers to add to their lists. For a long time, the shoebill was under threat as its eggs were stolen from nests. The Uganda Bird Guide Club advocated successfully for it to be illegal for these birds to be trapped or their eggs stolen. The shoebill is still listed as vulnerable, however. 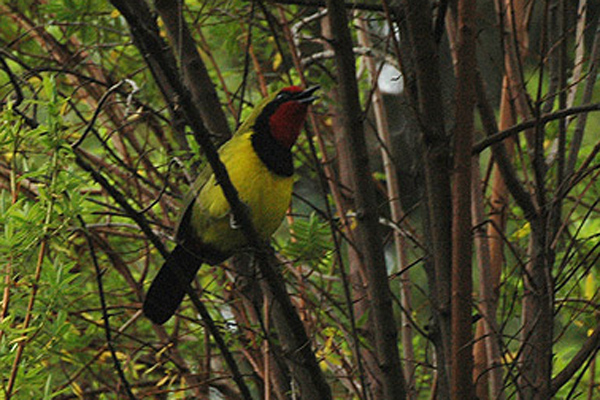 This brightly coloured bird is one of the more common birds to be found in Uganda, but it is also seen in the subtropical montane forests of central Africa. Its population levels are stable and it is not considered vulnerable. 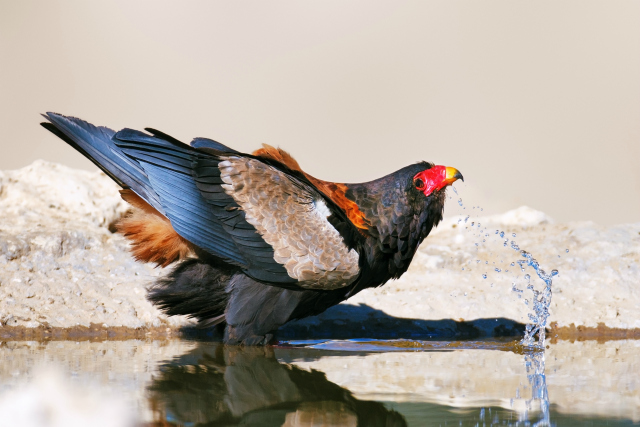 A stunningly beautiful eagle, the bateleur has jet black plumage and a scarlet face with  orange feathers down the back. In flight, the tail feathers appear to disappear while its legs stick out. Its name comes from the French for ‘tight-rope walker’. In 2009, this bird was placed on the ‘near threatened’ list due to a drop in population.