No matter which way you look at it, tourism in Africa has been booming over the last two-and-a-half decades, and will likely continue to grow at a breakneck pace for another 20 years.

In both leisure and business sectors, across the hotel, tour and airline industries, and taking into account both overseas and intra-African visitors, tourism has been on the upswing since at least 1990 and is predicted to continue growing at a rapid pace until 2030.

Two separate reports bear out these astounding statistics. According to a recent World Bank study, sub-Saharan Africa attracted 33.8 million visitors in 2012, five times more than in 1990, when only 6.7 million people visited the continent. This represents a whopping 300% increase.

And if you look at ALL of Africa, including North Africa, the figures loom even larger: according to a recent report by the United Nations World Tourism Organization (UNWTO), Africa saw 52 million visitors in 2012, up from 14.8 million in 1990.The UNWTO report showed dollar receipts of over US$36 billion in 2012, up from US$30.5 million in 2010.

Africa’s tourism growth is outpacing that of other parts of the world by leaps and bounds: African tourism has grown by an average of 6% per year since 2005, outpacing the global average of 3.9%, and rocketing past regions such as Europe (2.5% per year) and South America (5.5% per year).Experts say that for a long time Africa was not living up to its tourism potential, and is now playing “catch up.” 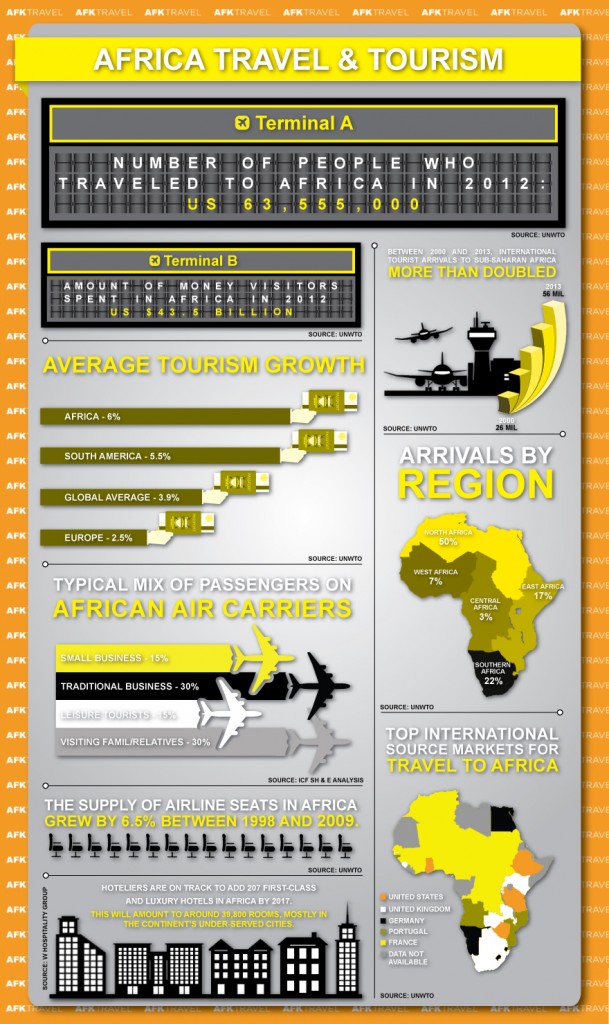 Martyn Davies, CEO of Frontier Advisory, a research, strategy and capital advisory firm, compared Africa’s 33 million visitors to the 48 million who arrive in Hong Kong alone every year. He noted that the number of visitors to Africa is a “drop in the ocean” compared to what it could be.

Considering the size of the continent and the number of attractions, there is much room for growth. In addition to countries such as South Africa, Kenya, Tanzania and Ghana, which have well-established tourism industries, the World Bank has identified about 10 more which are scaling up activity to an impressive degree: Burkina Faso, The Gambia, Malawi, Mozambique, Rwanda, Senegal, Uganda, Zambia, Zimbabwe and the Seychelles.

A further barometer of the robustness of the African tourism industry is the airline business: according to the UNWTO report, the supply of airline seats grew by 6.5% between 1998 and 2009.

And another key component of the tourism sector, hotels, are also showing explosive growth. According to a recent survey by Lagos-based consultancy, W Hospitality Group, some 40,000 new rooms in 207 hotels are planned in the continent’s under-served cities, up almost one third compared to 2011.

The boom in tourism seems to be tied to Africa’s burgeoning economy. More than half of Africa’s countries will see GDP grow by at least 5% per year through 2016, according to the Economist Intelligence Unit Ltd., compared with 1.2% in advanced economies.

Seven of the 10 fastest-growing countries in the next five years are likely to be in Africa, according to IMF data. “Africa currently has far more base development potential than just about anywhere else in the world,” says Protea Hotel Group CEO Arthur Gillis. “Numerous African economies are expanding rapidly and it’s encouraging to see GDP (gross domestic product) projections of between 6 per cent and 8 per cent becoming reality on the back of political stability and a burning desire to create wealth for many rather than just a select few.”

Moreover, the World Travel and Tourism Council estimates that 3.8 million jobs – including 2.4 million indirect jobs – could be created by the tourism industry in sub-Saharan Africa. In fact, the tourism industry is set to be one of the primary drivers of economic growth on the continent and directly employ 6.7 million people by 2021, according to the report.