The Pyramids of Giza are some of the greatest architectural wonders in the world. They should certainly be on the list of anyone visiting Egypt, especially those visiting nearby Cairo. They can be found in the Giza Necropolis (which literally translates to “burial ground”), an ancient complex of monuments that also includes the Sphinx, a boat museum, and several cemeteries. 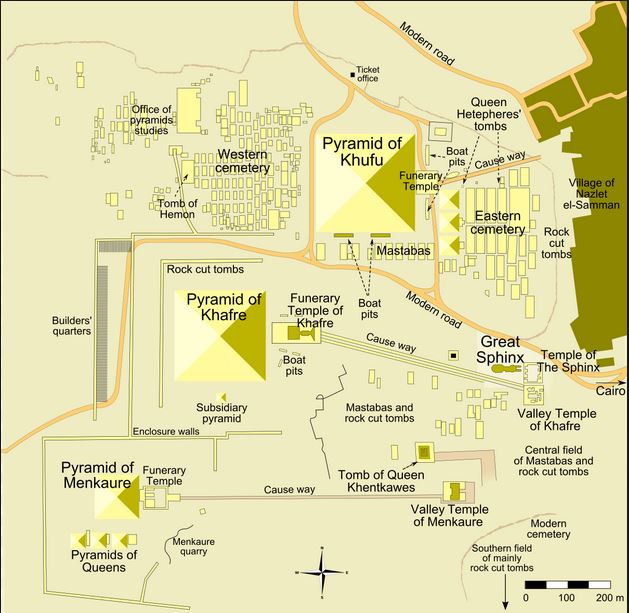 While one could spend several days exploring the Giza Necropolis and taking hundreds of pictures, it’s not possible to see every nook and cranny if you only have limited time. The following is a roundup of sites that could reasonably be explored in a fun, yet busy day-trip from Cairo, which is how most people see it. 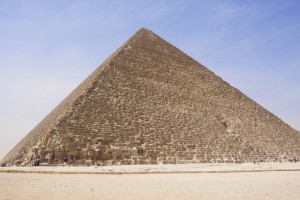 Pyramid of Khufu / Great Pyramid: Also known as the Pyramid of Cheops and built for Pharaoh Khufu, this pyramid is the last surviving monument of the Seven Ancient Wonders of The World. Inside Khufu is the great gallery that was used as a slipway and stands at over 30 feet high. The King’s chamber, also a must-see, is covered in ancient graffiti from the builders who added successive additions over the years. Air shafts, which flank the sides of the chamber, are thought to have been symbolic paths to heaven. Visitors once were allowed to scale the walls of Khufu, but no longer can in order to preserve the ancient foundation. Instead, there is now a lower entrance that was made by Caliph Maamun in 820 AD. Get there early to purchase tickets for entrance, as there is a limited number of them available per day.

Pyramid of Khafre: Also known as Chepren, its Greek name, this central pyramid was built for the son of Khufu’s son Khafre. Sometimes it looks a bit larger than Khufu’s pyramid due to the angle, but this is because it rests on higher ground. The summit of Khafre’s pyramid is the only one that still retains some of the original limestone. The limestone on the surrounding the pyramids was stolen by builders and thieves in nearby settlements over the centuries. Inside, visitors can go through a chamber and visit Khafre’s tomb, which lies beneath the pyramid.

Pyramid of Menkaure: The size of the Pyramid of Menkaure points to the relative decline in power after Pharaoh Khafre’s reign. The base of this structure is less than a quarter of the size of the other two large pyramids nearby. It is fortunate that this structure is still standing, as in the 12th century, one of the sultans of Cairo tried to dismantle it, leaving the characteristic scar on the outer face. However, it is still worth a visit, as the inside chambers are nicely decorated and also contain intriguing graffiti. 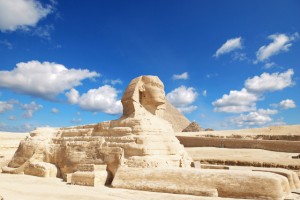 The Great Sphinx: Supposedly the head of the Sphinx is that of the Pharaoh Khafra and is one of the symbols most associated with Egypt. The Sphinx dates back to 2500 BC and stands over 60 feet high. Over the centuries, parts of the face, including a false beard, have fallen off. (One piece is currently in the British Museum in London.) The Sphinx should be saved for last during a visit, as there is a nightly light show (which is a bit touristy, but fun). The light shows are held at 6:30, 7:30, and 8:30 nightly, with the shows delayed by one hour in the summer.

Solar Boat Museum: This museum contains a full-sized ancient boat that was discovered in pieces in 1954. It is referred to as a solar boat because it resembles the same design that can be found on tomb paintings of the sun-god. It is speculated that the boat carried the body of Khufu from Memphis to his final resting place at Giza. Archaeologists put assembled the 1,000 pieces using traditional Egyptian materials such as grass, rope and wood. The Solar Boat Museum opens at 9:00 AM and closes at 4:00 PM daily, staying open for one extra hour in the summer.