The topics of health and disease in Africa have been on many people’s minds over the last few weeks, as Ebola has dominated news headlines. Ebola is no doubt a dangerous killer as far as diseases go, but it is not something the average traveler needs to worry about — it is relatively hard to catch, and affects only a tiny corner of the continent. There are other much more common and mundane diseases and health issues travelers should think about before heading to the continent — and thankfully most are much less deadly than Ebola.

Depending on where you go in Africa, you’re likely to be exposed to new and different germs, parasites, and diseases from what exists in your home country. Much of Africa is hot and tropical, which means malaria is common, and many people lack access to vaccinations and basic health care, which means diseases like pneumonia and TB that were conquered years ago in first-world countries are still sometimes found here. But it’s quite easy to stay healthy in Africa if you follow some elementary precautions. The following is a summary of some of the common issues with health and diseases in Africa, along with methods of prevention. 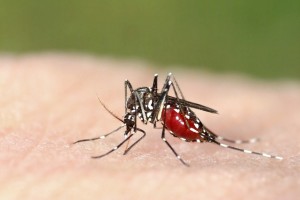 Yellow fever is a viral disease that has plagued sub-Saharan Africa for decades. The virus causes fever, nausea, chills, loss of appetite, and chills. The symptoms usually get better within five days, but if not, the liver can become damaged causing the notorious yellow skin associated with the disease. The virus is spread by mosquitoes through primates and humans and causes 200,000 infections and 30,000 deaths per year. Almost 90% of global cases of yellow fever occur in Africa.

Prevention and treatment: Unlike malaria and dengue fever, two other mosquito-borne diseases, there is a vaccine for yellow fever. Vaccination is recommended for all people traveling to Africa, and is required by some countries prior to entering. Getting vaccinated is important, especially for non-Africans, as they tend to suffer more once infected. You can get the vaccinations at most hospitals, travel clinics, and pharmacies with the proper prescription. Make sure to get the vaccine far enough in advance of your trip, as protection only begins around the tenth day (but after that, lasts 10 years). The other way to avoid getting yellow fever is to avoid contact with mosquitoes via insecticides, protective clothing, or bed nets.

Also known as typhoid fever, this is a disease you definitely don’t want to get. Typhoid progresses in four different stages of increasing, then decreasing, severity: The first week starts with rising temperatures, bloody noses, headaches, and a decrease in white blood cells. The second week, a fever around 104 is common and often includes delirium, giving typhoid the nickname of “nervous fever.” In the third week, many complications can occur such as intestinal hemorrhages, encephalitis, and oscillating fevers. The fever eventually comes down in the fourth week along with the other symptoms. Typhoid fever is endemic across the entire African continent and particularly so in sub-Saharan Africa.

Prevention and treatment: Vaccinations for typhoid fever should be administered at least one week before traveling to Africa. If it has been a long time since you were vaccinated, you should see a doctor about getting a booster, as the vaccine loses its effectiveness after a few years. There are two types of vaccines, one taken orally, and another one that is by injection, both vaccines are equally effective.

Bilharzia is a parasitic worm is present in most bodies of water in sub-Saharan Africa, such as Lake Malawi. Also known as schistosomiasis, the parasite can infect you when it comes into contact with your skin. It often starts as skin lesions, then if untreated goes on to affect the urinary tract and intestines, and cause symptoms such as bloody diarrhea, genital sores, and blood in the urine, liver damage, bladder cancer, and kidney failure. The disease has the second-greatest socio-economic impact (behind malaria) across Africa, but some countries have a higher prevalence than others.

Prevention and treatment: Unfortunately, there is no current vaccine for bilharzia. Prevention involves not drinking lake or river water in Africa, and avoiding swimming in it if you can. Most hotels in Africa have treated water piped in, but if you are staying somewhere that you suspect doesn’t, boil the water for one minute to kill the bacteria, then let it cool to a safe temperature before drinking. If you accidentally get submerged in water, be sure to vigorously dry yourself with a towel, though this is not a sure-fire prevention. If you do get infected, you can be treated quickly and easily with Praziquantel, an anti-parasitic medication.

Sleeping sickness is caused by two different types of parasites that can infect a person who is bitten by a tsetse fly. Like typhoid fever, there are several stages of the disease, and it is definitely a nasty, prolonged one you do not want to get. Symptoms include headaches, itchiness, fever, and chills, which all begin in the first one to three weeks after the bite. A few weeks to months later, other symptoms begin which include confusion, poor coordination, and trouble sleeping (hence the name). The disease is regularly found in 36 countries of sub-Saharan Africa, however, more than 80% of the cases are in the DRC.

Prevention and treatment: There is not an effective vaccine for sleeping sickness, however, the disease can be treated before neurological symptoms occur with drugs such as Eflornithine and Melarsoprol. If you experience early-stage symptoms and have recently traveled to a country where sleeping sickness is present (or if you remember being bitten by a tsetse fly), see a doctor immediately.

Malaria kills about 1.2 million people every year in tropical regions, and infects more than 200 million. It is transmitted by the bite of an infected mosquito and causes fever, chills, vomiting and other flu-like symptoms up 10 to 15 days after infection. Malaria can lead to death if left untreated. The disease is endemic throughout most of sub-Saharan Africa, with some exceptions. The CDC provides detailed information about malaria risk by country in this table.

Prevention and treatment: Though several companies are currently working on developing vaccines, currently none exists. Prophylactic measures include oral medications such as malarone, mefloquine and chloroquine. However some people experience unpleasant side effects from these pills, particularly vivid dreams. If you’re headed to a malaria-endemic area, talk with your healthcare provider about what they recommend, then decide what’s best for you. If you’re averse to drugs, low-tech prevention methods include insect repellent and pesticide-laced mosquito nets, which are available at almost every hotel in rural areas. These do not eliminate the risk of malaria though, and if you do get it, head to a doctor or hospital immediately so that you can get diagnosed, treated and monitored for complications. The treatment and choice of medication depends in part on where you were when you were infected; some forms of malaria respond to drugs such as quinine and doxycycline, while others are resistant.

Hepatitis A is an infectious disease of the liver caused by a virus that is present throughout sub-Saharan Africa. The virus is usually spread by eating or drinking food or water that is contaminated with infected fecal matter. It can also spread by close contact with somebody who is infected. Symptoms tend to last four to eight weeks and include yellowish skin, fever, nausea, swollen glands, and sometimes vomiting. 10% of people who get infected have prolonged or relapsing symptoms that can last six to nine months. Sometimes liver failure occurs, but is more common in the elderly.

Prevention and treatment: If you are traveling to Africa, it is good to get vaccinated for Hepatitis A (and Hepatitis B as well). It is recommended to get vaccines early, as they are given in two doses over a course of weeks. A booster vaccine is often given six to 12 months later, but this is not required in order to travel to Africa. Standard precautions for avoiding Hepatitis A include good hygiene such as washing your hands after using the bathroom, along with avoiding sharing toothbrushes, utensils, and towels. There is no treatment except bed rest and careful monitoring, especially for the very old, very young, and chronically ill.

HIV and AIDS are a substantial problem in Africa, though infection rates vary widely from country to country and region to region. It’s highest in southern Africa, where countries like Swaziland and Botswana have a 25% infection rate, while Zimbabwe, Namibia, Mozambique and Zambia hover around 15%. Infection is lowest in North Africa: Egypt and Morocco have rates of just .1%. The center of the continent falls somewhere in between: places like Kenya, Gabon, DRC, and Cameroon fluctuate between 4% and 6%.

Prevention and treatment:  If you have sex, use a condom. Don’t do IV drugs or share needles. Your chances of getting HIV/AIDS as a traveler are slim to none if you follow these simple precautions. It’s as simple as that. If you have had unprotected sex, or sex with multiple partners, it is good to get regular screenings just to be sure you haven’t contracted it.

General Health Tips For Those Heading To Africa: