When a national newspaper editor wrote a defamatory article about the dismal state of Johannesburg’s dining scene two years ago, there was a mixed response. Some loyal Jo’burgers defended their city, while many people agreed that there weren’t many restaurant gems in a city of franchised, expensive and artificial eating establishments. Two years later, no one can dispute the fact that Cape Town and its winelands claim the large majority of the South Africa’s top-rated restaurants, but Jo’burg is now starting to catch up. The following Johannesburg restaurant guide demonstrates that Joburg is no longer a slouch in the dining department.

In terms of fine dining, the award-winning DW Eleven 13 is run by a chef who worked under the legendary Heston Blumenthal and brings the Fat Duck chef’s touch of fun to exquisitely presented fusion food. A compact, ever-changing menu presents Asian-French dishes that display an element of deconstructionism, while still remaining well balanced in flavor — think grapefruit-glazed salmon with sesame bok choy and candied fennel, and grass-fed beef fillet with red wine jus and rosemary foam. It’s a good idea to opt for the six-course tasting menu with wine pairing to really experience this restaurant. 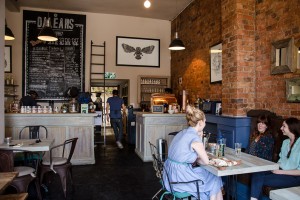 The Cube Tasting Kitchen serves 10-course “surprise” menus of unexpected flavor combinations to an intimate dining room. Each dish takes minutes to explain and is an experience in itself, prepared with a playfulness that takes eating almost into the realm of performance art. You take a spoonful of what looks like a bowl of porridge oats topped with a cherry and honey to discover that it is in fact a savoury risotto with glazed salmon mousse and butter. It’s gourmet but not serious — what’s great about this restaurant is the fun attitude and lightheartedness of both the chef and staff.

You won’t find a classier establishment than Five Hundred, which is found in the city’s most luxurious hotel, the Saxon. It’s winning plaudits for its multi-course tasting menus of modernist experimental cuisine (think dishes like “soup with nine lives” and pork with pear and burnt honey chutney and artichokes) by executive chef David Higgs, who has won an award as the best chef in the country.

Unlike Cape Town, many of Jo’burg’s restaurants are in shopping malls. Walnut Grove is Sandton City mall’s longest-running restaurant, offering Greek food, salads, mezze platters and cakes in a chic setting, with contemporary Louis Ghost Perspex chairs and minimalist wooden furniture under a giant tree draped with crystals. Red Chamber in Hyde Park has long been thought of as the city’s best Chinese restaurant. Tuck into classic Mandarin dishes — Peking duck, sizzling lamb and fire-cracker beef are specialties — in the stylish black-and-red interior. The trendy city alternative to suburban shopping malls, 44 Stanley in Milpark, has several restaurants set around courtyards: Vovo Telo, a coffee shop and bakery; Three Marys for wood-fired pizza and sandwiches; and a personal favorite, Salvation Café, which, according to legions of locals, serves the best breakfasts in town. 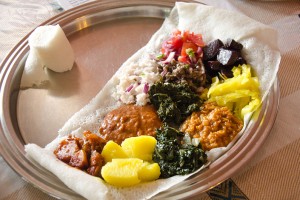 However, if you’re not a fan of eating surrounded by the chime of cash registers, Jo’burg has a healthy share of great neighborhood sidewalk restaurants. The bohemian area of Melville has cafés, bistros and bars filled with arty types lining its streets — the Service Station (for buffet lunches and brilliant breakfasts) and the Leopard, the city’s quirkiest restaurant, are its most popular spots. Parkhurst’s 4th Avenue is perennially buzzing with diners spilling out of places such as Nice (try the breakfast cups and decadent cupcakes), Espresso Caffe (salads, sandwiches, pizza and Mediterranean dishes) and Bistro (don’t miss the prego rolls). In Parktown North, you’ll find the Foundry, a craft New York-loft style restaurant that serves artisanal beers from around the world, wood-fired pizzas and gourmet British-inspired pub food. Thomas Maxwell Kitchen in Parkmore is a cozy fire-lit bistro with mainly French cuisine — choose from favorites such as mussels cooked in white wine and cream with pommes frites, and the fillet medallion on truffle cream topped with thyme butter.

Its north eastern suburb of Cyrildene has in recent years turned into Chinatown, with restaurants specializing in authentic Szechuan, Manchurian and Cantonese cuisine, and fabulous fireworks and street food celebrations over Chinese New Year. For Cantonese try Fortune Garden Chinese Restaurant, where you can feast on dim sum, sweet and sour pork and more exotic dishes such as jellyfish salad, or have Peking duck on pancakes at Long Men or pork and coriander dumplings at Chinese Northern Foods Restaurant.

For traditional South African food (such as umngqusho, a corn and bean stew, chakalaka, a spicy sauce and fried chicken feet) head to the tourist-friendly Sakhumzis or Wandies Place in Soweto, and for cuisine from all over the continent head to the edges of the city where African communities have formed. Try A Palhota in Troye Street for Mozambican dishes such as coconut fish curry alongside Portuguese fare, Abyssinia Restaurant in Kensington for Ethiopian meat and vegetable stews and Congolese mains such as fish cooked with spinach and peanuts at Kin Malebo in Yeoville.

There are more trattorias and pizzerias in J’oburg than you can shake a ciabatta at, proving that Jo’burgers’ favorite foodis of the pizza/pasta/risotto variety. The upmarket Assaggi in Illovo is where the well-heeled set dines on the signature asparagus-and-brie lasagna, roasted lamb shank and zucchini chips, while Randburg’s family-owned Café del Sol is a more casual Italian eatery with wholesome homemade pastas where traditional dishes get contemporary twists (such as the pasta with prawns flambéed in tequila).