Johannesburg has never been a must-visit destination. The city has long been an airport gateway to the rest of Africa — an obligatory stop before Cape Town or a Kenyan safari — rather than a highlight on the average tourist’s itinerary. This is due in part to Joburg’s reputation for violent crime, which is rapidly declining, by the way. But bypassing Joburg in favor of South Africa’s more obvious attractions means missing out on one of Africa’s most exciting, dynamic, and cosmopolitan cities.

Joburg draws people from villages and towns across South Africa and from the furthest reaches of the continent in search of jobs and opportunities, and this constant migration generates an energy that is palpable as soon as you step off the plane. The city hums with an urban rhythm that is as African as Cape Town is European, and has in recent years experienced an urban and cultural revival as sparkling as the gold Joburg was founded on. 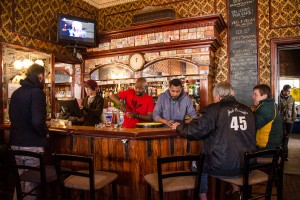 In the 1990s offices and residents flocked to the suburbs, leaving the inner city to rot. Now trendy hipsters, students, artists and creative businesses are moving back in, turning former industrial wastelands into cool hubs of restaurants, bars (head to Kitchener’s for some of the best underground DJs in the city), night clubs, and art galleries (a highlight is the Wits Art Museum). A good way to learn about the heart of Joburg, from its gold rush days to urban regeneration, is by taking a day-long open-top bus tour of the city which offers running commentary. Also don’t miss going to the top of the Carlton Centre, Africa’s tallest skyscraper, for the city’s best views.

The best way to explore the neighborhoods of downtown Johannesburg is by walking its streets, which buzz with music and markets. Many visitors are wary of doing this solo, but group tours are available. Try spending an afternoon with captivating guide Gerald Garner from Joburg Places, whose enthusiasm for the city attracts locals who have never set foot in the inner city.

North of downtown Joburg are endless sprawling suburbs full of faux-Tuscan gated complexes and generically boring shopping malls, interspersed with a smattering of characterful neighborhoods. There’s Melville, a bohemian area home to artists and actors; leafy Parkhurst, where you can find cafés, boutiques and restaurants spilling out onto 4th Avenue; Cyrildene, Joburg’s very own Chinatown; and Parktown, where the city’s first mining magnates built their imposing mansions (visit the beautiful gardens of the century-old Brenthurst, owned by the Oppenheimers, the city’s aristocracy, by appointment).

For such a big city, Joburg is surprisingly green: it has one of the world’s largest man-made urban forests, with over 10 million trees. Escape the hectic pace of the city in one of its green spaces: there’s the beautiful Botanical Gardens of thousands of rose bushes and indigenous trees next to Emmarentia Dam; Zoo Lake, where you can ride a boat on the lake or catch Carols by Candlelight in December; and Melville Koppies Nature Reserve, a wild piece of nature only a few miles from the heart of the city where you can participate in guided hikes.

There’s no better place in South Africa than Joburg for engaging with South Africa’s dark past. The excellent Apartheid Museum, which is heart-wrenchingly poignant with its admirably inclusive multimedia exhibitions of hundreds of years of colonialism and racial segregation, is worth spending at least several hours in. On the edge of the CBD is Constitution Hill (www.constitutionhill.org.za), the site of Apartheid-era prisons that once incarcerated Nelson Mandela and Gandhi, amongst other famous political dissidents.

One of the city’s most popular attractions is Soweto, South Africa’s most famous township. Various tour operators offer half or full-day tours that take in sights such as the church that provided a safe haven for freedom fighters (chat to the caretaker and he’ll show you the bullet holes in stained glass windows from battles with the police), as well as the Hector Pieterson Museum, which documents the student uprisings of 1976 through oral history.

For a taste of Joburg’s gold-mining past, visit Gold Reef City, an amusement park with a gold rush town theme, complete with a main street designed to look like the city at the turn of the century. Go on rides such as “The Miner’s Revenge” or take the “Story of Gold” tour, where you’ll descend several stories into an old underground gold mine and try your luck at gold panning back on the surface.

You can also go further back in history, to where human civilization began. While Joburg is a young city, established less than 130 years ago after gold was discovered on the reef, its history spans millions of years. Thirty miles northwest of the city is the Cradle of Humankind, a World Heritage Site where some of the world’s oldest hominid fossils were excavated: this is Joburg’s underground treasure. Walk through the damp, dark Sterkfontein Caves to see where many of the fossils were found, and visit the Maropeng Centre for replicas of the fossils.

Johannesburg’s ancient underground history is unchanging, but on the surface this is a city in transformation, its urban and cultural revival placing it on the tourist radar for the first time in decades.

Johannesburg has a higher crime rate than other South African cities, so you’ll need to be safety aware. Stick to the normal common-sense rules that you’d follow in any big city: lock your valuables in the hotel safe; don’t obviously advertise yourself as a tourist; keep your valuables close to you in crowded areas; and follow locals’ tips as to which areas to avoid. If you’re driving yourself around, make sure you know where you’re going (especially at night). 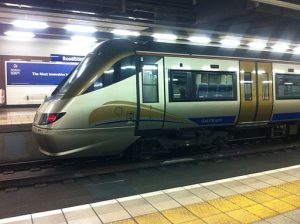 On the whole, Johannesburg is not an easy city to navigate if you don’t have your own car — it’s sprawling geography means that it’s not possible to get around on foot unless you only want to stay in one suburb. If you’re going to be traveling around the city a lot, it’s best to hire a car at the airport or from your hotel.

After decades of poor public transport systems, the city now has a safe and efficient train service, the Gautrain, which travels between the airport, Sandton, the inner city, and Pretoria.

There is also a newly-introduced Rea Vaya bus network, which currently has routes between Braamfontein, the Central Business District and Soweto (with plans to add more routes).

If you opt for taxis, it’s best to take metered cabs from reputable companies (ask your hotel for options) rather than hail one off the street. 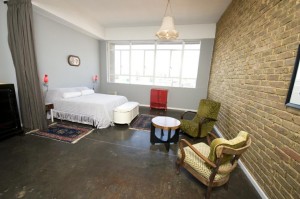 Johannesburg has no shortage of great accommodation options for a range of budgets, from cozy guesthouses, to five-star business hotels, to elegant boutique inns.

If you’re travelling to Johannesburg on business, then your best bet is to stay close to commercial areas and the Gautrain: opt for Sandton, Melrose or Rosebank, choosing from the corporate efficiency of the Radisson, the eco-chic Peech Hotel or the classically stylish 54 on Bath.

The Saxon, in the exclusive suburb of Sandhurst, is one of the city’s most opulent hotels, and often hosts visiting celebrities. For luxury on a more intimate level, stay at the 12-room Residence Boutique Hotel, which is faultlessly classy.

In the heart of the city there’s a crop of new, hip hotels, catering mostly to a young cool crowd: the 12 Decades Hotel in Maboneng has 12 rooms designed by different artists, while Braamfontein’s Bannister Hotel has a perfect mix of budget-friendly prices and clean, modern design.