I locked eyes with the 440-pound gorilla and felt a chill run through my spine.

I was on foot and only six feet from a wild silverback the size of a giant Buddha statue. He stopped chewing the plant stem he held gingerly in his huge hand, paused for a few seconds and then walked towards me, getting close enough to touch. He lumbered past up a hill to find something else to eat. This was definitely worth the 4:30 a.m. wake-up call.

Coming face-to-face with one of these giant, gentle creatures in the Central African rainforest is one of the most thrilling wildlife experiences on the planet, and something that should be on every nature lover’s bucket list.

There are less than 1,000 mountain gorillas left in the world, and they are only found in two places: a volcanic mountain chain that spans southwest Uganda, the eastern Democratic Republic of Congo and northwest Rwanda; and in Bwindi Impenetrable National Park in Uganda — home to half the world’s  population. 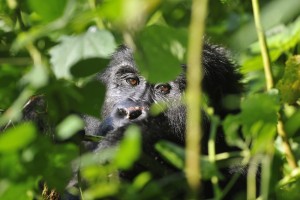 To get to Bwindi, I’d flown five hours from Johannesburg to Entebbe in Uganda (via Kigali in Rwanda) and bounced around in an overland truck for 10 hours to reach Lake Bunyonyi in the southwestern corner of the country. The night before the trek I’d barely slept, overcome with excitement like a kid the night before Christmas.

In the pre-dawn dark our group of eight piled into minibus taxis (organized by the overland tour operator) to drive us to Bwindi to start the tracking adventure. A two-hour journey of winding hillside dirt roads ended at the entrance to a thick forest vibrating with the sound of tweeting birds and hissing insects.

Gorilla permits had been purchased from the Ugandan Wildlife Authority months before by the tour operator and our group had been allocated the Ruhija section of the park, which is home to two habituated gorilla groups. The group we were to track was Bitukura (named after the place where they were first habituated) with 13 individuals.

After a short briefing by our lead guide, John Tugumisirize, we set off into the forest, walking sticks in hand, flanked by two guards armed with Kalashnikovs (for the forest elephants, we were told). A troop of porters carried our bags.

The hike started easy enough on a well-worn, gently sloping path shaded by tall trees. We rambled along for about an hour, stopping to take photos of the beautiful forest which reminded me of the jungle in the movie “Jurassic Park,” minus the T-Rexes. Then our guides heard a call from the trackers who were on the gorilla’s trail. Trackers are aware of where gorillas make their nest the night before, and pick up their tracks in the morning. We veered off the path into thick undergrowth. This is where things got a bit more adventurous — not to mention sweaty and muddy.

The forest became so dense that you couldn’t see the person three feet in front of you. Guides hacked through stinging nettles with machetes as we slipped and slid down a steep hill, grabbing onto vines to stop falling. We’d only just made it to the bottom of the ravine before starting to ascend the other side, the sound of our breath becoming the dominant soundtrack. I’d just steeled myself to accept the fact that we might be hiking like this for hours, when, without any warning, we came across the gorillas. We felt them before we saw them. A few of them were up in the trees, dropping pieces of bark on our heads.

Our first sighting looked like a black blob sliding down a tree trunk just in front of us. It disappeared into the forest before anyone had taken a camera out. Feeling thrilled and excited, we quickly made our way further up the hill. There, the dominant silverback sat on his own, munching away at a pile of vegetation. Cameras clicked away as he ignored us, seemingly unconcerned by the group of khaki-clad tourists in a photo frenzy. A few feet from him, a 10-month old baby that looked like a teddy bear with shiny button eyes clung to its mother’s back and stared at us with more interest. Another adult female walked right through our group, touching my leg as she went past before plonking down a few feet away. 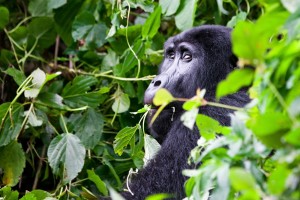 Despite the size of the gorillas and the fact that the silverbacks could rip me in two in a matter of seconds if they wanted to, I didn’t feel scared or threatened in the presence of these apes. Mountain gorillas are generally peaceful unless their family is threatened, and these groups are habituated to human company so they are totally relaxed around tourists.

For the next hour we were transfixed by these magnificent animals, whose human-like behavior was fascinating. One gorilla seemed quite bored by our arrival and sat on his haunches with his arms crossed as if to say “And? What have you got that’s of interest to me?” Another had decided it was nap time, so he stretched out on his side and lay his head on his arm, looking like he was on a lounger at a beach resort. Two males lay on their backs in a sunny spot and played lazily before rolling over onto their sides like toddlers in a playground. The most photogenic moment was when the 10-month-old baby got off his mother’s back and walked up to his father, the dominant silverback, who was lying on his stomach propped up on elbows. The baby curled himself up in the gorilla’s baseball mitt-sized hand.

It was hard for the guides to tear us away. Pleas of “just one last picture!” only worked for so long. It felt like the shortest hour of my life. Of all the safaris and wildlife encounters I’ve had, tracking mountain gorillas in the wild was by far the most magical. If you’re a nature lover, this is one experience that should be at the top of your bucket list.