Though Africa has its pricey parts — think luxe safari camps in Kenya, or the wine/golf routes of South Africa — it’s also one of the best places in the world to visit if you’re a backpacker on a budget. Since much of the continent is poorer and less-developed than the Western world, costs are usually lower as well.

Getting to Africa will be your biggest expense, but from there it can be extremely cheap to stay and move around. But you have to choose your destination carefully, as not all countries and cities offer budget accommodation. For example hotels in Lagos, Nigeria average US$383 per night — and there are no hostels — so this city is definitely not on the backpacker circuit.

As far as transportation, in most parts of Africa it’s pretty easy to get around inexpensively by bus or shared taxi. Bear in mind that these dirt-cheap transit options take a LOT of time and often involve discomfort, breakdowns, bureaucracy, and ineptitude. But if you can go with the flow and focus on enjoying the journey, not just the destination, you’ll save a ton of money.

Here are eight places in Africa for backpackers that are relatively cheap and hassle-free. You can get the most bang for your buck in southern and eastern Africa, so most picks are there, but a couple of western and northern Africa options are included as well. 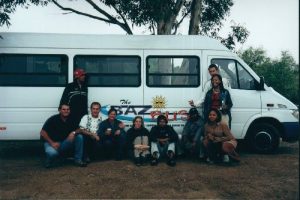 South Africa has a well-developed backpacker scene and all the major cities (as well as medium-sized and small towns) have at least one hostel, budget hotel or campsite. In addition, the backpacker-oriented Baz Bus follows a fixed route around the country and lets you hop on or off within a pre-determined time period. With the money you save on hotels and transit in South Africa, you can afford to spend a bit on potentially pricey activities like safaris, shark-cage diving or zip-lining. However, some of the best activities in SA are free, such as hiking the Drakensberg mountains, or lounging on Durban’s golden beaches. A favorite backpacker spot is the remote, surreal Wild Coast (Eastern Cape), where you can go diving, fishing, hiking and surfing, or immerse yourself in Xhosa culture. 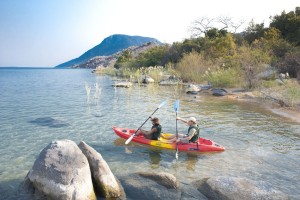 Lake Malawi is a massive, ancient freshwater lake that dominates the northeastern part of the country. Backpackers love it because its coastline is dotted with cheap, quaint guesthouses and chill beaches. Activities like water skiing, banana-boating and scuba diving can also be done for a fraction of the price of chic beach resorts, and Malawi is the cheapest country in Africa in which to get dive certified. You can stay overnight for a song at places like Monkey Bay, Cape Maclear, Senga Bay, Likomi Island and Nkhata Bay. For example, at Mayoaka Village in Nkhata Bay, you can camp for just around $10 a night, and most camp spots are on terraced, hillside gardens that lead down to the water. Another popular spot is Mango Drift Lodge on Likomi Island, which features beach huts, dorms, and a bar and a restaurant on the beach. The lake’s location at the crossroads of Malawi, Mozambique and Tanzania equals close proximity to dozens of game reserves and national parks, so you have other options if you get tired of the beach.

Morocco is quite inexpensive overall, with lots of cheap-and-cheerful guest houses, incredibly inexpensive street food, and the CTM bus network to get from town to town. Some backpacker favorites include the beach town of Essaouira and the mountain town of Chefchaouen. Essaouira is a surfers’ paradise with a vibrant medina and lots of funky bars and restaurants that specialize in inexpensive seafood. Essaouira also hosts the incomparable Gnaoua music festival every year. Tucked into the heart of Morocco’s Rif Mountains, Chefchaouen almost doesn’t feel real. The majority of the town’s buildings are painted various shades of brilliant blue, and you can see the mountains from almost everywhere. The main square is bursting at the seams with cute cafes, and both hostels and hashish are plentiful. 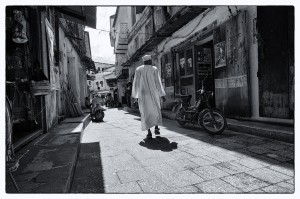 Although Zanzibar has mostly been taken over by upscale resorts, its heavenly beaches and intriguing Stone Town still welcome backpackers on a budget. In Stone Town, The Flamingo guesthouse and Princess Salme Inn are good budget options. Outside Stone Town, the best beach-y places to set your bags down for a few days include: Paje (on the east coast), which offers cheap, high-quality bungalows such as Kinazi Upepo; Nungwi (on the north coast) where you can get a simple, affordable beach hut at Kendwa Rocks; and Bwejuu or Jambiana (on the southeast coast), where there are quiet beaches and budget accommodation at places like Coral Rock Beach Bungalows.