From the Zambezi to the Nile, rivers are the lifeblood of many African communities, and the best way to experience their natural power is to jump in and get wet. From tranquil and scenic to heart-racing and wild, these 10 rivers are perfect for rafting and kayaking in Africa.

One of the world’s most gnarly stretches of whitewater is found just south of Victoria Falls on the Zambezi River between Zimbabwe and Zambia. The ride is an almost non-stop class IV and class V monster rapids from put-in under the Victoria Falls Bridge to the take-out some six tumultuous hours later. There are two dozen named rapids along the way, including Gulliver’s Travels, which is almost a kilometer-long stretch of Class V whitewater, and one of the day’s biggest challenges. Rafting is best between August and January when the water is at its lowest – and wildest. 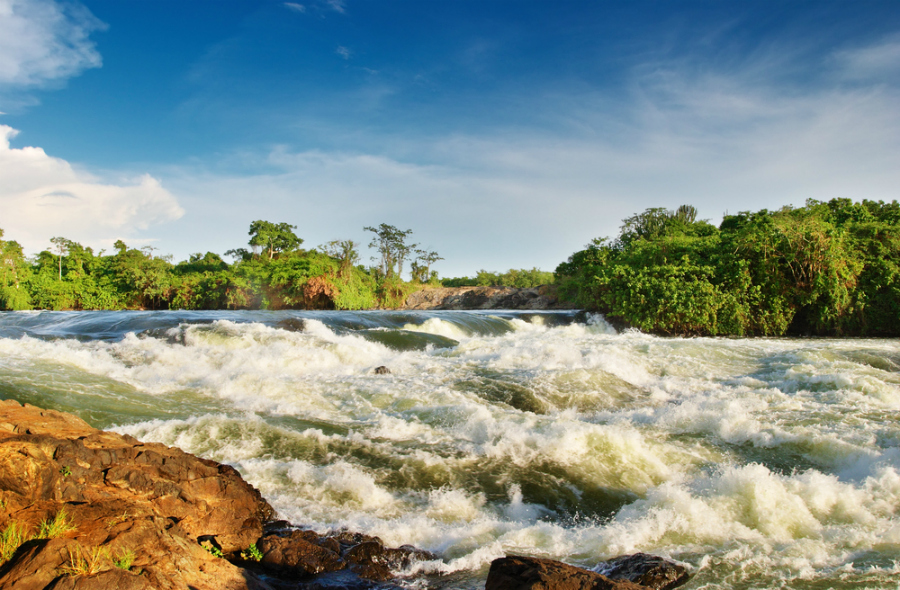 Africa’s other premier whitewater playground is Uganda’s White Nile River. Here trips range from half-day to three days on the dam-controlled river, where rapids gets wilder the further downstream you go. Try the full-day adventure from Nile River Explorers, which takes you down a 25-kilometer stretch of mostly class V whitewater just upstream from Lake Victoria and the town of Jinja that includes a 12-foot waterfall drop. 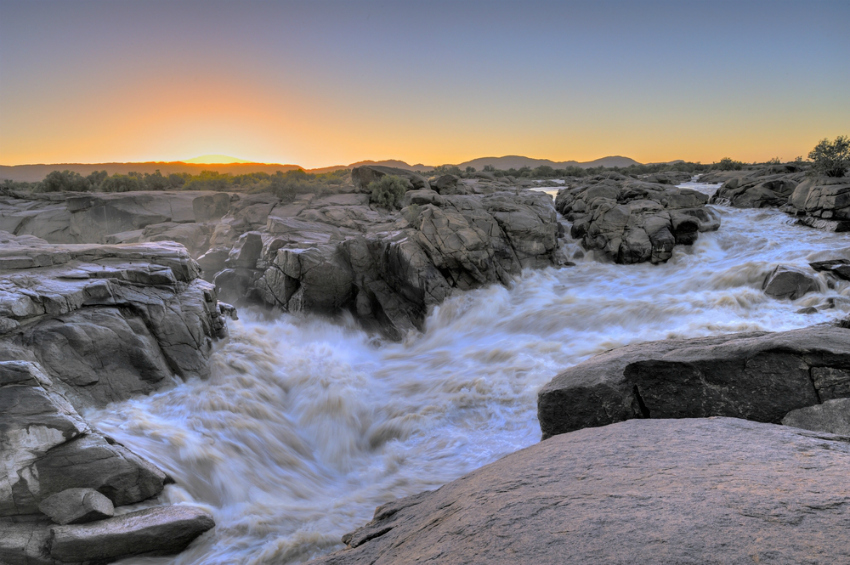 This isn’t the most adrenalin-rushing whitewater on the continent, but a six-day kayak trip down South Africa’s longest river, the Orange, is superb in its own right. Flowing north from the Drakensberg Mountains through the majority of South Africa before emptying into the Atlantic Ocean just south of the border with Namibia at Alexander Bay, the most fascinating part of this river is found in the Richetersveld mountain desert, where one company, Umkulu, runs six- and eight-day guided back-country river-camping adventures in inflatable kayaks.

Experienced paddlers will love the class V rapids on Kenya’s Mathioya River, which offers the country’s most technical whitewater. A low-flow river (rapids are harder to navigate safely), it drops 450 meters in 22 kilometers and offers a non-stop thrill ride. 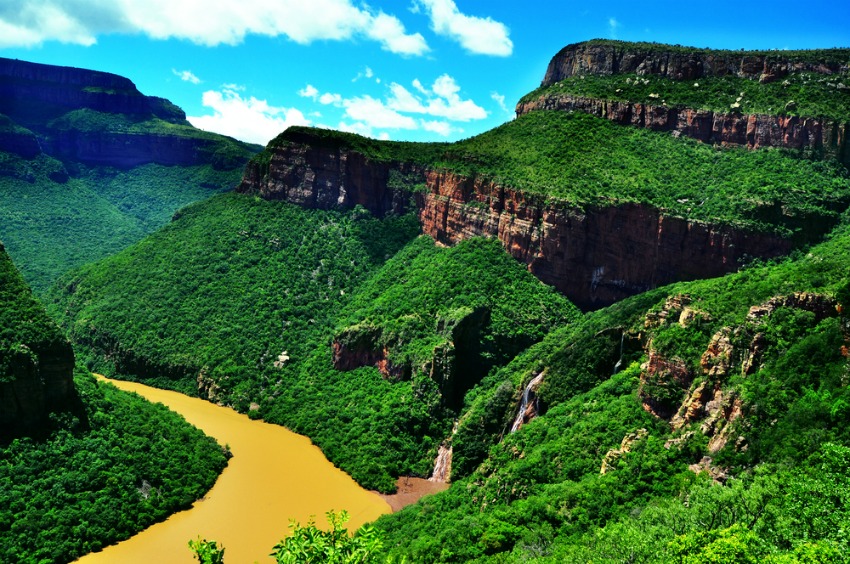 With 14 sets of rapids spread across 8.5 kilometers you are guaranteed fun action rafting the Blyde River south through the famous canyon of the same name to the take-out at Blydepoort Dam. There are two class IV rapids, which are the adrenaline highlight, but the scenery makes up for any slow sections on this full-day trip. There is a campground at the take out that is quite scenic should you wish to spend the night by the water.

Flowing through the Atlas Mountains, Morocco’s best rafting experience is found on the turquoise waters (so strange for a river) of the Ahansal just a few hours drive from Marrakech. Here you can experience North African culture and stunning mountain scenery on an organized rafting trip lasting between two and four days. Rapids here run the gauntlet, but most are classified as class III and IV. 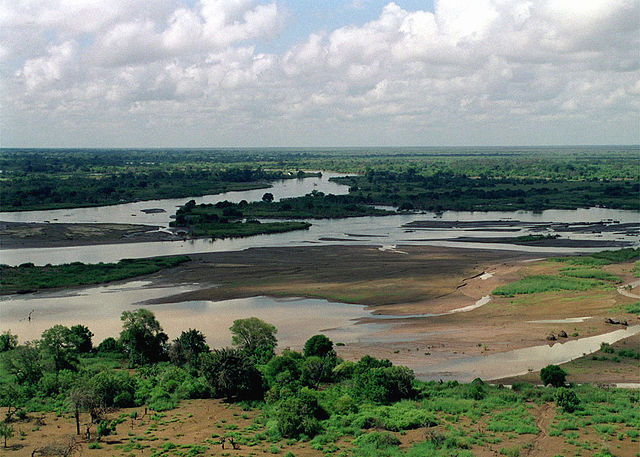 Beginning with an easy stretch of Class II and III rapids, Kenya’s Tana River, located north and east of Nairobi, makes a fantastic one-day intro to rafting. Rapids increase in intensity as the day continues with the final section consisting of class IV and V whitewater. 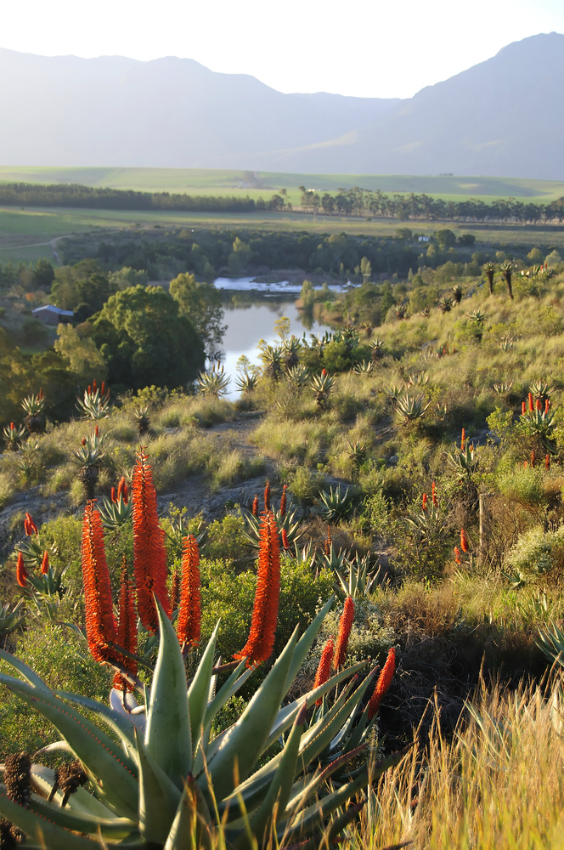 With rapids not getting wilder than a Class III, a Breede River rafting trip is perfect for families and novices – and also for running in a funyak (an inflatable kayak). The location, less than two hours drive from Cape Town, also makes it an easy Mother City day trip. The most popular stretch begins near the town of Worcester and takes you through a scenic wine and fruit-producing region. Most people choose to ride in inflatable kayaks. 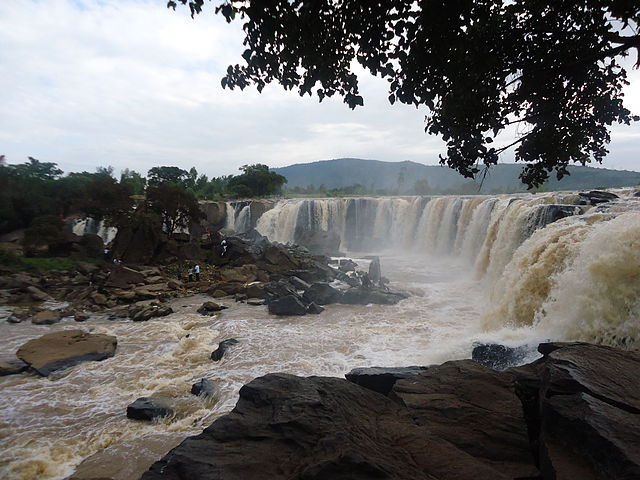 There’s nothing quite like watching elephants and giraffe stroll by as you shoot down whitewater, which is exactly the experience rafting the Athi River near Tsavo National Park. Three-day trips are run from early April to late July and then again from late October to mid January. There’s class III rapids plus plenty of wildlife – including crocs. 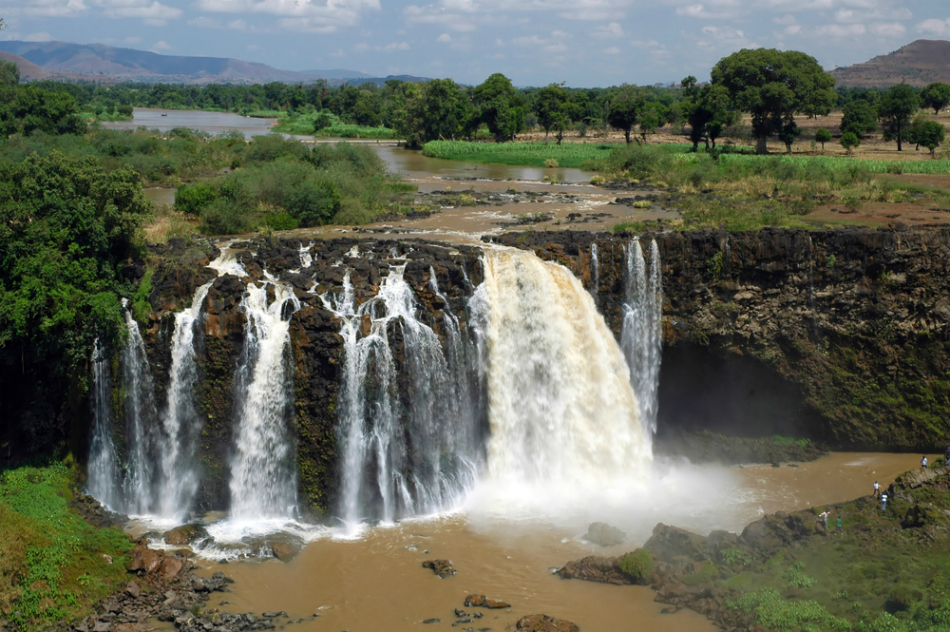 This remote whitewater experience takes you down one of the Nile’s main tributaries, the Blue, which begins in Ethiopia’s Lake Tana and then flows towards Sudan and finally into Egypt where it dumps out into the Mediterranean Sea. The best whitewater is found on multi-day trips.

Located near the town of Clarens, this location is fast becoming known as the adventure capital in the eastern Freestate. The waters are clean and pristine, and come from the Katze dam up in the Maluti Mountains of Lesotho, flowing down to the Vaal dam. It is the only river in South Africa with a constant high water level, and includes grade II – IV rapids, and the river is large enough for the big white water rafts. 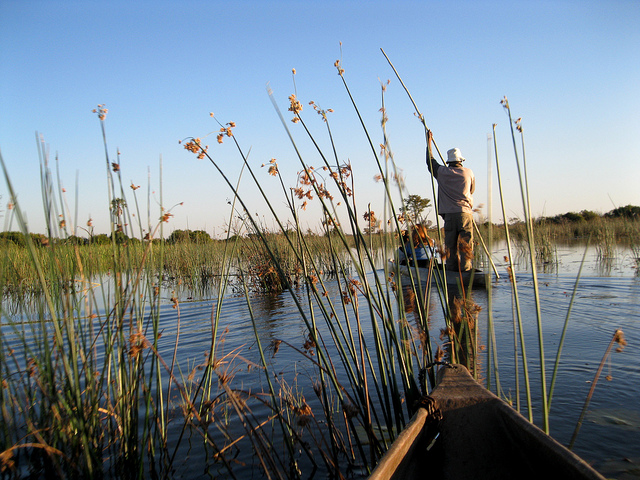 A mokora in the Okavango Delta (Athena Lao / Flickr)

The delta floods every year, teeming with wildlife and making most of it accessible only by air…or water, which is equally as impressive (and slightly less costly). Experienced paddlers will love getting up close and personal with the animals in the Okavango delta, such as hippos, crocs and waterbirds. This can be done with a traditional dugout canoe called a makora. 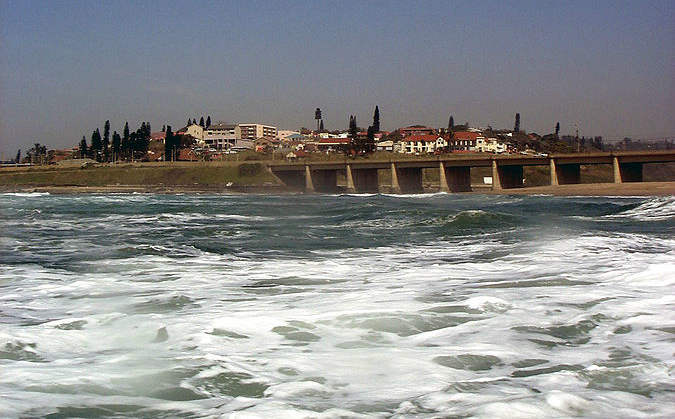 Located an hour from Durban, the Mkomazi River (formerly known as Umkomazi River) is in quite a remote area, with stunning scenery. It offers a selection of rapids for everyone’s ability, with grade III and IV on a  rising scale of difficulty. In fact, the Mkomazi boasts some of the best rapids to be found in South Africa, with the Section from Hella Hella to Number 8 being regarded as the biggest traversable whitewater south of the Zambezi. 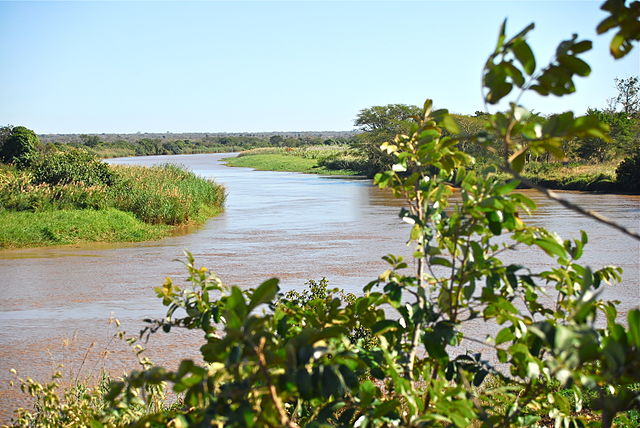 For a shot of adrenaline, a whitewater rafting trip down the Great Usutu River (also known as the Lusutfu River, the Suthu River, and the Maputo River) is a Swaziland must-do. On the Bulungu Gorge section of the river a set of mild to white-knuckle rapids await. The wildest rapid is a Class IV, which while exhilarating, can be tackled by first time rafters with a sense of adventure. When water levels are low, and the white water slightly sluggish, guides add an extra rush by offering clients the opportunity to jump off cliffs into the river or rappel down them. 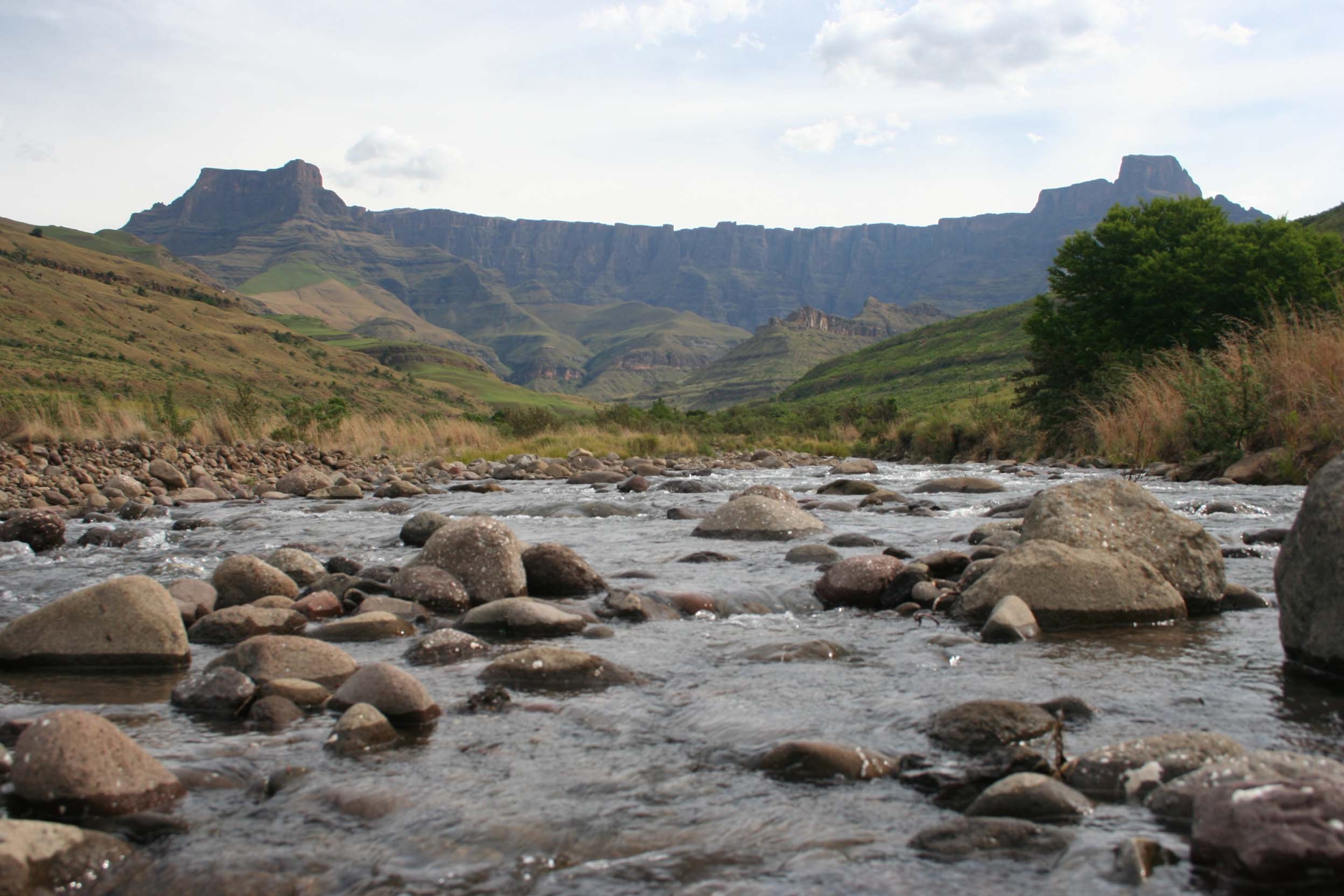 The Buffalo River was once the border between the kingdom of Zululand and the British colony of Natal, and as such has a lot of historical sites. It also includes some challenging rapids. The Buffalo is a tributary of the nearby Tugela River, which boasts some impressive white water and some intense rapids.