Ghana’s basic flavours come from ginger, chilli pepper, garlic, palm oil and dried fish, so the one thing you’ll rarely be faced with is a bland meal, whether you’re in a Ghanaian restaurant or a private home.

Often it’s red-red, a delicious bean stew served with plantain. Sometimes it’s groundnut soup, or a sinful street-food snack like kelewele. Try as much as you can, and don’t give up if you get something you don’t like.

You’ll encounter a lot of criticism of Ghanaian food. But when you push its detractors for their opinions of specific dishes, there’s always a telltale moment: “Oh, that one? I love that. That’s the exception.”

Ghanaian food is eaten with the right hand, and you’ll be provided with a big bowl of water to wash before and after the meal. Dipping and scooping with fufu, kenkey or banku is initially tricky, particularly if you’re left-handed, but it comes with practice — most people will be delighted to see you trying local food and more than happy to give you some pointers.

It isn’t always clear from the menu (if there is a menu), but there are three parts to your order: the sauce or soup, the starch, and the meat or fish, which will come in the bowl if you’ve ordered a soup. It isn’t unusual to get the head of the fish, which isn’t regarded with the same distaste as it is by many Western diners – quite the opposite, in fact. 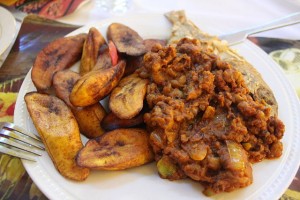 Red-red: A simple, hearty stew made with palm oil, beans, tomatoes and stock, and flavoured with chilli and ginger. Served with fried plantain, it is one of the most accessible and best-loved of Ghana’s dishes, and is the starting point for most new visitors.

Aboboi: A close cousin of red-red, this uses plump, spherical bambara beans, stewed up with ginger and garlic. It is traditionally served with plantain fritters called tatale and a small bowl of sugar, which is sprinkled on as a seasoning. It sounds strange, but it works.

Palaver/kontomire: Variants of palaver sauce can be found throughout West Africa, but the dish always features dark green leaves — usually taro (cocoyam) in Ghana. Egusi seeds or okra help to thicken the mix, and smoked fish or shrimp is used to beef up the flavour, creating a fairly pungent taste.

Okro stew/soup: The thickening effect of okro (a.k.a. okra, or ladies’ fingers) puts this dish somewhere between a soup and a stew, and its slimy, gelatinous texture is very much an acquired taste. Avoid fufu here, as you’ll end up with a meal that has very little textural variation.

Groundnut and palm-nut soup: Imagine a rich, comforting bowlful of satay sauce and you’re more or less there. Groundnut soup is based on locally made peanut butter, cooked up with tomatoes, onions and spices until thick and creamy; palm-nut is a similar dish made from the fruit of palm trees, and has a little less sweetness.

Light soup: A spicy tomato-based soup with masses of garlic, ginger and chilli. It pairs well with just about anything, but is good with strong-tasting protein — tilapia, goat, or even grasscutter, a large bush rodent that is worth trying if you can find safe farmed meat.

Think of the three main starch staples as having increasing levels of density: the loosest is fufu, which has a jello-like consistency; next comes banku, like balls of putty; finally kenkey, which is has a dense, crumbly texture rather like a stock cube.

Fufu: Made by boiling and pounding plantain, cassava or yam. It’s eaten almost exclusively with soups and stews, and it generally isn’t chewed — you get a small piece, dip it and swallow it whole.

Banku: Made with a mix of corn and cassava, these thick, doughy balls are commonly eaten with grilled fish — usually tilapia — or soups and stews. The fermentation of the flour gives them a slightly sour taste that needs balancing with a rich sauce or some hot peppers.

Kenkey: Often compared to an extreme version of sourdough bread, kenkey is made by shaping corn and/or cassava dough, wrapping it in cocoyam or banana leaves and leaving it somewhere warm for a few days to ferment. Like banku, it’s a popular accompaniment to fish, and benefits from lashings of fierce pepper sauce.

Omo tuo: Pounded rice balls. These perform a similar function to the main staples, but without the sliminess of fufu or the sour, fermented flavour of banku or kenkey. They’re particularly good with groundnut soup — the combination is a Sunday special in many restaurants.

Gari foto: Served a little like couscous, gari consists of flavoured cassava shavings fried with onions and tomatoes, occasionally with some other vegetables thrown in. A rich tomato sauce moistens the dish.

Yam and plantain: Common accompaniments to stews, usually offered fried or boiled. Yam responds better to boiling than plantain, which can go rather tough and bland; fried plantain may be bad for you, but it is a thing of wonder.

Jollof: Thought to come from the Wolof people of Senegal and Gambia, this flavoursome fried rice dish is a reliable 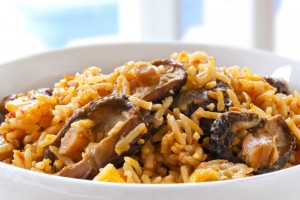 standard in Ghana — even when everything else on the menu is ‘finished’, you can be sure still jollof will be available. Its distinctive red colour comes from palm oil and tomatoes, while chilli peppers and ginger deliver a medium kick of spice. 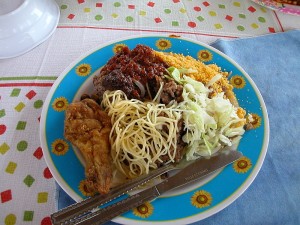 Waakye: There are equivalents of waakye all over the world, from the classic creole red beans and rice to Jamaica’s rice and peas. It is just as popular in Ghana, forming a filling breakfast or lunch dish on its own or with a range of accompaniments, which could include eggs, noodles, meat or fish, gari (cassava chips) and hot shito sauce.

Kelewele: The jewel in Ghana’s street food crown, kelewele are chunks of ripe plantain doused in chilli and ginger and deep-fried into crunchy, sticky morsels you won’t be able to put down.

Bofrot: These round donut-type pastries are available almost everywhere. Ladies carry piles of them in metal washing up bowls or small glass cabinets.

Yam and cassava chips: Like potatoes, these starchy crops crisp up beautifully. Vendors toss them in bubbling palm oil and serve with hot pepper sauce or shito, a blend of chilli, ginger and shrimp.

Kebabs: Done right, the chicken, beef and goat kebabs, seasoned with chilli and ginger, are a real treat, and go perfectly with a beer at a roadside bar. The gizzard version is more of an acquired taste.

Fruit: Finally, eat fruit. It may not technically be Ghanaian cooking, but the country will treat you to a limitless supply of fresh coconut, wonderful pineapple and mango, and the tiniest, sweetest bananas you’ve ever tasted. Make the most of it; you will miss it when you leave.