In the inaugural article of the “First Person Africa” series, AFKTravel editor Karen Elowitt sits down with Trish Gaudet, who participated in the 2013 Tour d’Afrique, a bike trek that extends 7,500 miles from Cairo to Cape Town. Traversing 10 countries in four months, the Tour is now in its 12th year.

Trish, who took part in the Tour with her husband Wayne, shares her account of the trip, including preparation back home in Okotok, Alberta (Canada), the highs and lows of spending four months in the saddle, and what she gained from the experience.

How did you hear about the Tour d’Afrique and what made you decide to attempt it?

We first heard about the Tour in 2007, from someone on a backpacking trip we went on. The combination of Africa and cycling was irresistible. After that, it was on our minds, but the timing wasn’t right to actually participate until 2013. At that point I had just retired from my job, and Wayne was also retired, though he went back to work after. So we were able to step out of our lives for four months.

Africa has always been a place that has captured my imagination; it’s a continent that’s been on my radar since I was very young. I was intrigued by the wildlife, the scenery, the landscapes, the exotic-ness. In fact, friends have always said “Oh yeah, Trish has been talking about Africa for years!” I had been to Egypt before, but nowhere else in Africa, and I learned that the Tour went to areas we were interested in, so we just took the leap and signed up.

Do you have a background in cycling, and how did you prepare for such a long trek?

The end of the Tour d’Afrique (photo courtesy of TDA)

Wayne started cycling 30 years ago and I thought it was crazy, and that the roads were dangerous and unpleasant. But as time went on, I started doing the same thing! I started with a 5K ride, then built up from there. I’ve been doing longer distance rides for about 15 years. We like cycle touring – trips that run 2 days, or 2 weeks, or whatever. I have done several distance tours on my own, and together we have done some rides with tour companies like Backroads. Before the Tour d’Afrique, the longest trip we did was a self-supported 23 day-trek from Alberta to Colorado. That gave me the impetus to think I could cycle from Cairo to Cape Town.

We’re both fairly physically fit, but an event like that is difficult to prepare for. So we just did what we could. We did what we normally did, but some extra as well. Basically we spent as many hours as possible sitting on a bike, toughening up our backsides. We also did a compu-trainer class (sort of like a spinning class) once a week, plus used a wind trainer. And Wayne did a lot of running, while I did yoga.

So tell me about day-to-day life on the Tour. How many miles per day did you log? Where did you sleep? What did you eat? 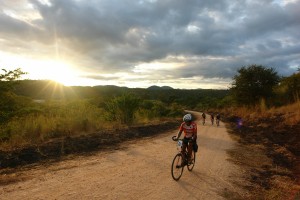 Sunrise along the Tour d’Afrique route (photo courtesy of TDA)

We’d rise in the dark every morning, put on our shorts, put away our tents and sleeping bags, then eat breakfast. We’d get on our bikes as soon as it was light out. We’d start early because we had a lot of ground to cover, and also because lots of places get really hot by afternoon. We’d try to get as many miles in as early as possible. Every evening we’d stop to camp (or sometimes stay in inexpensive guest houses). The chef would prepare a meal, then we’d have a rider meeting where the tour leader would describe the next day’s itinerary and give directions and guidance on how to navigate it. Flagging tape was used to mark important turns on the route, but otherwise we were on our own. We logged about 120km (65-70 miles) per day. About 60 of us took part in the entire Cairo to Cape Town ride, but a few dozen others rode sections of it.

Talk a little about the sights, smells and sounds of Africa.

Like life itself, there is a little bit of everything in Africa. Tanzania had the most variation: there were rolling hills, and the scenery was gorgeous. I felt most comfortable there. Sudan was a big surprise; I expected it to be challenging, but the people were wonderful and the scenery was more beautiful that I ever imagined. The desert landscape had a barren, remote feeling — a pristine emptiness. Botswana was overall a little boring, but the “elephant highway” was a highlight. I saw rhino in Botswana too. I loved seeing animals from my bike, but that didn’t actually happen that often! I thought I would see more.

Crossing every border, you could tell right away that you were in different country, even if the scenery was the same. For example, crossing from Sudan into Ethiopia, it seemed like there were just way more people; there were more livestock being herded, more cars, donkeys, and buses in the streets, and the roads were generally more crowded.

What were some challenges you faced?

Ethiopia was the most challenging country. I liked it, and it was stunningly gorgeous, but it’s densely populated and it was exhausting riding in crowded areas. The people constantly wanted to talk to us and high-five us, and some rocks were thrown at us. I had a little meltdown in Ethiopia that came about from a combination of being dehydrated from the hot nights, and mentally worn down from the demanding crowds. I took a day off in Ethiopia and rode in the support vehicle until I recovered.

In Tanzania we had to slog through the mud on rainy, unpaved roads for a couple of days. I’m not used to mountain biking, so I’m not accustomed to riding in mud and rough terrain. At first I tried to ride through the least muddy parts, and stay on more solid ground, and stay clean. But once I got covered in mud I figured I was not gonna get any dirtier, so I let go of trying to stay clean and dry and just pushed forward. It was a good challenge for me. It was tough but fun at the same time.

We also encountered a day-and-a-half long sandstorm in Sudan. We were riding in it, camping in it, cooking in it. Nothing stops the Tour d’Afrique! There’s still sand in our belongings that will never come out.

Wayne and I were lucky as far as not getting stricken by anything nasty. We had just mild, low-grade issues like saddle sores. Almost everyone else had some digestive complaint at one time or other. Some folks were sick for days, to the extent that they could not ride. Others fought through it and stayed on their bikes.

How did the Tour measure up to your expectations? What did you learn about yourself? Did the Tour change you as a person?

Oh, the Tour exceeded my expectations. It was a truly unique four-month journey. I never thought it could be as exciting as it was.

One thing I did gain was an overwhelming sense of how very fortunate I am to have been able to do the Tour. I am fortunate to be healthy, and to be able to do something that’s very self-indulgent. Many times I felt like a spoiled child. This was brought home every day when we rode past people working hard just doing ordinary things like getting water. I knew they would never have an opportunity to do what we were doing. I appreciate that I am Canadian and able to do such a trip.

I’m definitely a different person now, but I’m still trying to work out how it changed me. That’s a process, an intangible and elusive evolution.

The tour definitely give me a sense of accomplishment. Before the trip people said to me “Oh I could never do that kind of trip.” My answer to them is “Yes you can!” If I did it, you can do it. Whether it’s circumstances or schedule that’s holding you back, that’s your issue to solve. But you CAN do it.

To read a more detailed account of Trish and Wayne’s journey, visit their blog: http://www.trishandwaynesworld.blogspot.com/