If you’re a first-timer planning to join the thousands each year who make an attempt on the summit, you’ll first need to determine if Kilimanjaro is in fact the right mountain for you. If the answer is yes, you’ll have to carefully prepare, then make sure you climb in the smartest, healthiest way possible.

Are you and Kilimanjaro a good fit?

The following are some important pre-trip questions to ask yourself before deciding whether to climb Kilimanjaro, which is not the right mountain for every climber.

1) Are you climbing the mountain for the challenge of it and the feeling of accomplishment, or to have some time alone in the wilderness? 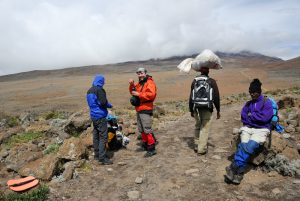 This question is important because unlike most North American and European mountains, Kilimanjaro can only be climbed with a guide (and with a porter for the guide). And the entourage is usually significantly more numerous than this, with up to five support staff per climber, depending on which trekking company you use to organize your climb. This, combined with the large number of climbers on the mountain throughout the year, means that trekking on Kilimanjaro is not a solitary wilderness experience. For some climbers, this can be a plus. In fact, getting to know your porters and guide can be a great cultural introduction, and many climbers have formed lasting bonds with their support team. For others, the lack of solitude and – at some camps, the crowds – may be a detriment. (Although choosing one of the lesser-used routes, such as Lemosho/Londorosi or the Northern Circuit route, means you’ll encounter fewer fellow climbers.)

2) Are you prepared for the strenuousness of the climb?

While technical mountaineering experience is not required to climb Kilimanjaro, the mountain is very demanding. The ascent gradient at the mountain’s upper reaches is significant, and altitude is a major consideration. According to estimates by park authorities, less than half of all trekkers who attempt a climb actually reach the summit. Almost all climbers feel the effects of oxygen depletion on the final push to the summit, no matter what their fitness level, and some start feeling it considerably earlier. Also worth remembering is the fact that every year climbers die on the mountain. Other factors include muddy, slippery paths lower down, the danger of falling rock on some routes and the steep and strenuous loose scree slope near the top. While a high degree of fitness is not strictly necessary for climbing Kilimanjaro, it certainly helps in coping with the mountain’s physical challenges, although even fit climbers are often forced to turn back due to lack of proper acclimatization. Climbers with asthma, sickle cell anemia and other health conditions should only attempt a climb after consultation with their physicians. There is no helicopter rescue service.

3) Are you prepared for the expense?

These days, Kilimanjaro treks organized through upper end tour operators can easily cost from US$2000 per climber or more, excluding international airfare, travel costs once in Tanzania, and post-climb tips for guides and porters. While economizing on fees is possible by booking a shorter trek – for example, five or six days – this is not recommended. Your climb will be more enjoyable and you will have considerably higher chances of success by allocating at least seven to eight days. For a detailed breakdown of the costs involved, click here.

What you need to know before you go 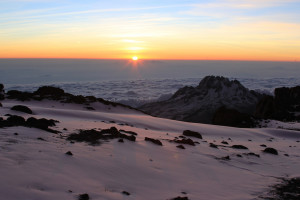 Sunrise from the summit of Kilimanjaro. (Filip Lachowski / Flickr)

After considering the above, if you still think Kilimanjaro is the right mountain for you, then it is time to set about preparing.

The mountain can be climbed at any time of year, although visibility — while never guaranteed — tends to be more reliable between mid-November and February, and again around September and early October. During the main rainy season from March through May, paths lower down are very muddy, and conditions on the mountain are often cold and wet (either rain or snow or both) at any time of year. Dress appropriately. Your trekking operator will provide you with an equipment list, which should include a waterproof sleeping bag and good-quality winter clothing for the mountain’s upper reaches.

By way of warm-up for the real thing, consider spending a few days prior to your climb hanging out in Moshi town, which lies at about 800m (2,625 feet) on Kilimanjaro’s lower slopes, or doing day hikes in Marangu village, just below Kilimanjaro National Park’s Marangu Gate (about 1800m or 5905 feet). Another good warm-up, especially if you will be climbing with Arusha as your base, is a trek up nearby Mt. Meru. This volcanic cone rises to 4565 meters (14,977 feet), and is Tanzania’s second-highest summit.

An important pre-trek preparation is deciding which climbing route to use. Route length varies from five to nine days, with at least seven days suggested to assist with acclimatization. The Marangu route has long been the most heavily used. While logistically straightforward, I’d recommend one of the other routes instead. The Machame route, beginning on Kilimanjaro’s southwestern flank) is scenic as well as popular. Londorosi (from the west) is also very scenic, but lesser used. Both of these routes also offer good opportunities for acclimatization.

Once you’re on the mountain

Pacing is important. Good guides from reputable trekking operators will be able to assist you with this. Overall, the best advice is slow and steady.

Also important is proper nutrition. The better your outfitter, the better your meals will likely be. Whichever operator you use, it is still worth bringing healthy energy snacks such as dried fruits and trail mix. These can usually be found in Moshi — or even better, Arusha — but bringing some supplies with you from home is recommended. Also essential (and best brought from home) is a good headlamp, to use at camp each evening, and for the final ascent to the summit, which usually begins about midnight and finishes about dawn.

There are many highlights to look forward to on a climb. It is fascinating to watch how the vegetation changes as you move from zone to zone, from lush montane forest, continuing up through moorlands and finally to alpine desert. The descent is an easy slide (literally) down the scree slope that you so laboriously ascended, and from there a pleasant walk steadily downwards.

Another highlight is the splendid sunrise view from the summit over the plains far below. The glacier panoramas from the summit are equally magnificent. Despite Kilimanjaro’s rapidly diminishing snowcap, there is still plenty of ice to be seen.

Cultural opportunities can be organized pre- or post-trek on the mountain’s lower slopes to enhance your experience and give you an introduction to the lifestyle and traditions of the local Chagga people. These include a visit to a small Chagga museum in Marangu village, and some short cultural walks, which are also generally based out of Marangu.

After your climb, and a very welcome hot shower, a few days on Zanzibar or Mafia islands make an ideal way to conclude your Tanzania travels.

On The Roof Of Africa: 10 Things You Didn’t Know About Mount Kilimanjaro

How Much Does It Cost To Climb Mount Kilimanjaro?

15 Items You Should Always Have While Climbing Kilimanjaro