“Today I want to see a leopard,” I announce. It is our first morning at Ngoma Lodge, a remote eco-lodge in Botswana’s extreme northwestern corner, and we are about to head out for our first safari in Chobe National Park. I’m having breakfast with my two friends, Glenda and Busi, who have joined me for this adventure. “It is the only cat I’ve never seen on safari.”

“Most of us haven’t dear, I’ve lived in the bush my whole life and only seen the whip of a tail one time,” the property manager, passing by and hearing me, stops to say.

“Well I for one don’t want to see ANY CATS,” Glenda announces with a pout. She is from Zimbabwe, but has never been on safari before. “I’ve never liked them.”

I shake my head, and finish my eggs. I’ve heard it is hard to see cats in Chobe anyway, because you cannot track off-road — which is good for the animals and the environment, but bad for humans on safari that want to snap photos of big kitties. So unless your camera has a massive zoom lens, you’re relegated to seeing cats on the side of the road. This is hard enough with lions, and near impossible with the elusive leopard. 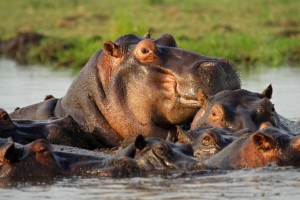 “It’s nearly impossible, I’ll take that bet,” I say. We shake on it and head to the truck where our guide Vincent awaits, along with Glenda and a couple from Prague with boxes of giant cameras.

Chobe National Park sits in northern Botswana, near the borders of Zimbabwe, Zambia and Namibia. And it is actually easier to access from the three countries surrounding it than from many parts of Botswana — the park is located less than 100km from Victoria Falls for instance, making it a popular combination trip. Encompassing 11,700-sq-km, it is Botswana’s third-largest park and also the country’s first, established in 1967. With four distinct eco-systems, it is also home to some of the greatest concentrations of animals in Africa — at the right time of year herds of up to 5,000 elephant have been spotted here.

The morning of a typical full day safari in Chobe is spent checking out the first of these eco-systems, the Chobe River, which separates Botswana from Zambia. It is a 40-minute mile from Ngoma Lodge (which is located at the western boundary of the park) through the park to the Chobe Marina, at the eastern edge, where boats departs.

Hippos, crocs and birds galore greet us as we cruise down the river in our boat, making a big lazy circle around a grassy island where buffalo and elephant cross narrow channels to hang out and sip from the Zambezi’s banks. It is a unique experience as far as safaris go, since they usually take place on land. Botswana is one of the few countries where members of Africa’s Big Five can be spotted from the water.

After two hours on the boat it is time to go looking for kitties in the arid hinterland that makes up Chobe’s second eco-system (the other two are comprised of marshlands). We all pile back into the vehicle and head into the park.

In the end, Busi not only wins the bet when we do in fact see a leopard, she also sweetens the icing on her cake by spotting the cat herself.

It is just after lunch, which we had as a picnic at a table Vincent set up under a baobab tree in the heart of the park with giraffes and antelope meandering past, and we are back in the vehicle. The sun is overhead now and the air is dry but hot. I can feel my skin burning and wish I’d thought to bring sunscreen. I’m full from lunch and starting to feel sleepy, almost nodding off, — we’ve been driving around for a while without seeing any animals — when I hear Busi calling to Vincent:

He slows the green monster down to a crawl.

“Do you see something?” he queries.

“A tail, there, in the bush, do you see?” Busi is leaning out the left side of the truck, her eyes pinned on what looks like a jumble of green and brown and nothing more to me. “Yes, it is there, a leopard. Look.”

Vincent slams on the brakes. The Czech photographer is pulling his giant gun of a lens from its case and attaching it to the camera’s slim black body and practically climbing over his wife in his rush to reach Busi’s side of the truck.

I don’t see anything. Neither do the Czechs. But Busi is sure now, and Glenda and Vincent aren’t far behind in confirming. You can take an African out of the bush, but you don’t take her sight away Busi had told me with a chuckle earlier when she’d promised to find me a cat. I believe her now.

“There it is, a baby,” Vincent says, pointing into the scrub. I squint and lean over Busi who is also pointing, but I see nothing.

“Here, here,” she tries to guide my hand in the direction, lining up my sight. 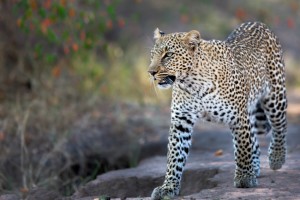 And then suddenly something scampers down a different tree and across my field of vision, just 15 feet from the front edge of the car: a beautiful spotted cat with a long thick tail.

“No way! That must be the mom and the little one is the cub,” Busi exclaims.

We spend nearly an hour with the mother and her cub that have an impala kill up in the tree and alternate climbing up it to eat.

“I’ve never seen anything like this,” Vincent says. “This is once in a lifetime. To see two leopards on the ground like this for this long. They are notoriously shy and also nocturnal, so spotting them alone is hard enough. And two? You are lucky girls.”

He’s right we are. Seeing a leopard is one of those magical experiences you don’t ever forget, and Chobe is the place where I witnessed it, making my safari here one I will never forget.