Most foreign tourists visit Mombasa after they’ve seen Nairobi, and are struck by the vast differences between the two cities. Not only is Mombasa much older and smaller, but the population mix is quite different.

Located on Kenya’s Indian Ocean coast, Mombasa has been inhabited since prehistoric times, but it first came into importance when ruled by a Muslim Swahili clan in about 900 CE. The “founding families” are part of the Thenashara Taifa (or Twelve Nations) Swahili lineages, and their descendants are still important players in city life.

Since the city sits on an island separated from the Kenyan mainland by two creeks, it became an ideal port in the Middle Ages, providing access to the East African hinterland for traders from India, China and beyond.

Mombasa has only about one-quarter of the population of the capital Nairobi, and its residents are primarily Swahili, with 70% being Muslim. This is evident on Fridays when large numbers of men can be seen heading to the mosque. A stroll through the bustling streets of Old Town feels a bit like a trip to an Arab medina in Marrakesh or Cairo.

Old Town consists of a warren of narrow streets and bustling shops, and is best negotiated with a guide. There’s not much to tempt a tourist (the usual mix of food, household goods and every-day clothing), with the notable exception of the atmospheric Jahazi Coffee house.

Fort Jesus, which is adjacent to Mombasa’s Old Town, is definitely one of Mombasa’s don’t-miss attractions. The fort, formally known as Forte Jesus de Mombaça, was built by the Portuguese in 1591 to protect their trading operations at the town, an active port for almost six centuries by the time of its construction.

Built from coral stone and lime mortar by the Portuguese at the end of the 16th century, Fort Jesus was put in place to guard the Old Port of Mombasa. If viewed from the air, it’s obvious that it was built in the shape of a man (head toward the sea), “[reflecting] the Renaissance ideal that perfect proportions and geometric harmony are to be found in the human body”, according to its 2011 listing among UNESCO World Heritage Sites.

Captured several times, including by the Omani Arabs and, later, by the British, Fort Jesus is considered one of the best-preserved examples of a Portuguese military fortification.

The fort is usually included on a tour of Mombasa, or you can hire one of the guides strategically placed just outside the ticket booth. Inside, you can climb the walls overlooking the Indian Ocean and explore such features as the wall-mounted latrines. A small museum shows a collection of trade goods that have passed through the port, including Chinese porcelain and Swahili jewelry. Don’t miss the reproduction of a wall painting done originally in carbon and ochre by Portuguese sailors depicting ships coming into the port.

Another must-see downtown is the arches over Moi Avenue. A pair of huge elephant tusks crafted from aluminum, they were erected to commemorate a visit by Princess Margaret in 1956. 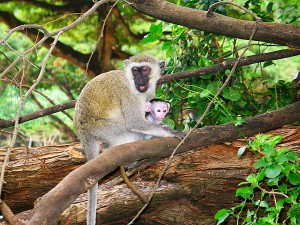 Haller Park, located five miles north of Mombasa island, has much to tempt the visitor. Fitness buffs like its clearly marked hiking paths. Families like the chance to get up close (but not too close) to the hippos, giraffes and crocodiles living there. Conservation fans are fascinated to learn how the Bamburi Cement Factory created the park in a rehab of the used-up portions of its limestone quarry.

At first glance, Haller Park appears to be a natural area, but the remnants of its origins as a limestone quarry are everywhere. Tall free-standing towers of rock show how much of the substrata was removed. Bamburi Cement Factory (still in operation further inland) has rehabilitated the area by planting thousands of trees (primarily casuarina) and reintroducing native plants.

Haller also offers a fish hatchery, a butterfly pavilion, children’s playground, small café and several noisy bands of vervet monkeys. Some injured or orphaned animals were brought to live in the park, including hippos, giraffes and several species of antelope. Regularly scheduled feeding times make it easy to get close: 11 a.m. and 3 p.m. for the giraffes and 4:45 p.m. for the hippos. These herbivores are tame enough to get close to (you can hand-feed the giraffes), but there’s a fence and a drop-off between visitors and the crocodiles. It’s obvious when it’s feeding time for the crocs: they glide into view and position themselves beneath the pulley across their creek. Handlers attach pieces of raw chicken to the ropes, taunting the crocs until one makes a successful leap to snatch the morsel before attaching another and beginning the game anew. 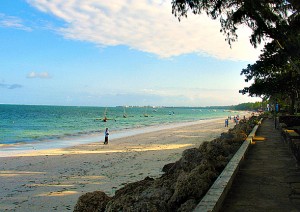 But most visitors don’t come to Mombasa for the history, culture or wildlife. They’re drawn by the beaches. Dozens line the coast both north and south of the island, and they’re a popular stopping off point for foreigners who have been on safari — there’s nothing like a few days of lounging on the beach to wash away the dust of a Kenyan savannah. Though pleasant, the beaches in Mombasa are not the wild, pristine sort: they are strewn with temporary kiosks selling all sorts of touristy items to visitors from France and Germany, and the occasional tout may even offer you a camel ride.

The easiest way to access Mombasa’s beaches is to stay at one of the many beach resorts that abut the coast. Almost all feature direct access to the beach, although that strip of sand between the hotel and the water actually is open to the public, which means you can spend a day at the beach even if you’re staying in Mombasa city center. Popular beach resort areas include Nyali and Bamburi to the north, and Diani and Maweni to the south.

Beach resorts come in a variety of sizes, and amenities and services vary. An “all-inclusive” may include meals, snacks and beverages, but if wine and other alcoholic drinks are part of the deal, they’re usually bargain brands. Some resorts allow only paying customers onto their property (a problem when you’re throwing a destination wedding and not all of your guests are staying in the resort). 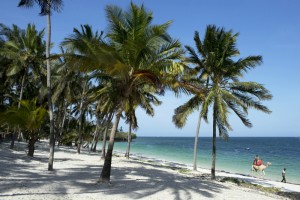 A beach near Mombasa (Shutterstock)

Your resort can arrange a car and driver for expeditions to Haller Park or into Mombasa.