Many visitors to Kenya breeze through Nairobi on their way out to the bush. Hotels are used to dealing with one-night guests who are intent on getting a few hours rest after a long flight, then fleeing to their safari destination as quickly as possible. However, the sleep-and-run crowd is missing out on one of the most exciting, cosmopolitan cities in Africa, and the opportunity to shop, dine and get immersed in local culture. Here’s a suggested itinerary for those with three days in Nairobi to spare.

It’s hard to believe when you look around at the number of people and buildings in Nairobi, that this is an accidental city not much more than 100 years old. Instead of beginning as an ancient settlement or as a market town on an historic trade route, Nairobi was set up as a work camp at Mile 237 of the Mombasa to Kampala railroad in about 1899. Since then, it has grown into one of the largest and most vibrant city centers in east Africa.

Start your exploration at the National Railway Museum, to see how it all began. Train buffs no doubt will want to spend hours, but most folks just wander the indoor exhibits and climb through a few train cars (including some used to film “Out of Africa”) before heading into the city.

If you stroll down the City Hall Way, you’ll see major government buildings and monuments such as the one to Kenya’s first president, Jomo Kenyatta (the name assumed in 1978 by the man born Kamau wa Ngengi, a member of the largest tribe in Kenya, the Kikuyu).

The Central Business District is geared more toward the clerks and officials who work there — think office supply stores, dry cleaners and banks — but there are a few places to indulge in a bit of retail therapy. It’s a good idea to do a bit of comparison shopping before loading up on souvenirs to bring home, and there are lots of African carvings, Maasai textiles and beaded necklaces from which to choose.

Browse the storefronts along Biashara Street, check the art galleries on Kaunda and Standard streets, and consider the options at the Zanzibar Curio Shop on Moi Avenue, which has a good selection of traditional crafts at reasonable (and fixed) prices.

English is one of the country’s two official languages (the other is Swahili), which makes it easy for British and American tourists to navigate Nairobi. Note: If you prefer not to wander by yourself, there are dozens of companies that offer guided walking tours of central Nairobi.

Stop for lunch in the Thorn Tree Café at the Sarova Stanley Hotel. Although the original thorn tree is no more, its replacement still serves as a message board. The original was called Nairobi’s first post office, because in the city’s early days, residents would leave letters for friends pinned to its bark.

Spend the afternoon learning more about the history, culture and wildlife of Kenya at the Nairobi National Museum before enjoying an al fresco dinner on the Lord Delamere Terrace at the historic Fairmont The Norfolk Hotel, which first opened its doors in 1904.

Take time to see the animals on your second day — that’s one of the reasons you came to Kenya, isn’t it? Within a half-dozen or so miles of downtown is the Nairobi National Park, a 44-square-mile preserve with lions, Cape buffalo, rhinos and gazelles (an estimated 80 species of large mammals) plus ostrich, egrets and hundreds more seasonal birds. 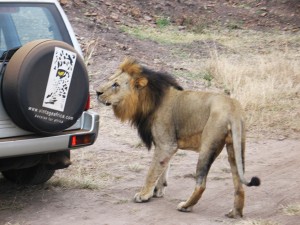 Arrange with your hotel for a guided trip to the park and, yes, it’s worth leaving before breakfast to be at the gates when they open at 6:30 a.m. The wildlife is most active at dawn and dusk, and this will be your best chance to see the elusive leopard (a nocturnal hunter). There are lions, both black and white rhinos, Cape buffalo and all sorts of antelope and gazelles — with the Nairobi skyline as a backdrop and traffic noise as a distant hum.

Then, head to the David Sheldrick Wildlife Trust to watch the staff bottle-feed the two dozen pachyderm “toddlers,” most of whom were orphaned by ivory poachers (a continuing challenge in sub-Saharan Africa). To avoid overexposing the young elephants to humans, they’re only on view for one hour. Get there by 10:30 a.m., and you can get a good spot at the rope for the 11 a.m. to noon feeding. Usually an elephant or two will come close enough to the rope that you can rub its dry and dusty thick skin. 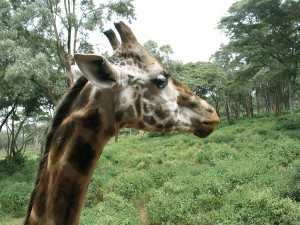 After baby elephants, it’s time for giraffes. There are three major subspecies in this part of Africa: reticulated, Rothschild and Maasai. Head to the Giraffe Center operated by the African Fund for Endangered Wildlife, a breeding facility for the endangered Rothschilds.

Visitors climb a tower to hand-feed food pellets at giraffe-height. The bravest — mostly teenaged girls — hold the pellets between their lips and let the animals swipe the food away with their long, slippery tongues. Needless to say, there’s lots of giggling.

After all those animals, the most logical place for dinner is Carnivore, the Nairobi restaurant renowned for its wide selection of meat that’s sliced and served tableside. Although you won’t be offered elephant or giraffe, there’ll probably be crocodile and ostrich (and a dozen more meats) on offer.

If you don’t mind a touristy (but fun) cultural experience, spend a couple of hours at the Bomas of Kenya. This heritage center located near the main gate to Nairobi National Park offers a mini-education in the culture and traditions of Kenya. The grounds feature re-creations of traditional bomas (grass-roofed huts) and other structures from different tribal areas. Locals perform traditional dances and music, sing songs, and there’s a daily acrobatic show.

In the afternoon head west to Karen, the leafy neighborhood named for the author of “Out of Africa.” The centerpiece of this upscale enclave is the Karen Blixen Museum, which is located in the house where Blixen lived in the 1930s. 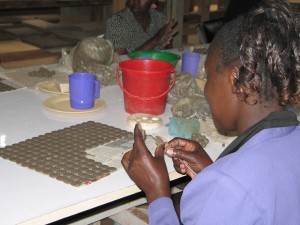 Also in Karen is the world-famous Kazuri Beads factory, which produces exquisitely handmade ceramic beads and pottery. It was founded by a European ex-pat in 1975 to help provide livelihoods for poor single mothers. Two employees in a small workshop in an estate’s backyard have become more than 400 who work in a factory that ships products to 30 countries worldwide (including the United States).

For eats, there’s the Talisman, a 21st century version of a caravanserai (the restaurant, not the hotel, part). The furnishings are vaguely Silk Road, recalling Kenya’s history as a trade route from China and India to the interior of Africa, but the food tends toward British colonial. If you’re just in the mood for java, try the Tamambo Karen Blixen Coffee Garden, close to the Karen Blixen Museum. (It’s operated by the same group that owns the Carnivore.) 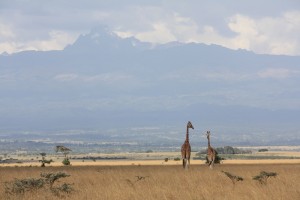 As an alternative to another day in the Nairobi, you could take a day trip a short way out of town. Grab a taxi or matatu to Navaisha, which is about 60 miles northwest of the city. The town is the gateway to both Lake Naivasha and Hell’s Gate National Park. A fun way to explore the park is to rent a bike and cycle among the griaffes, zebras, gazelles, warthogs, and monkeys. On Lake Navaisha you can boat amongst the birds, hippos and buffalo while enjoying the beautiful scenery. Don’t miss the Crescent Island Game Sanctuary, a private wildlife park.

Other great places for a day trip include Aberdare National Park, Mukurene, ancestral home of the Kikuyu tribe, and Fourteen Falls (near Thika).