Abuja, the capital of Nigeria, has a bit of a bad reputation as a boring, master-planned yawn-fest. But most of that scorn is undeserved. While the touristic and nightlife scenes in Lagos are years ahead of Abuja, there are plenty of reasons to like this inland city, and some even prefer it.

Abuja as a whole is more docile of a city than Lagos, with a lower population, better planning and better overall management. It’s also where the country’s federal buildings are, as well as numerous embassies.

On the surface, Abuja is greener and cleaner than Lagos, with hills, curved streets and even a few parks. The plateaus and mountains of central Africa can be seen in the distance, and the air is even clear enough to see them.

Much of the affection towards Abuja also has to do with its relative calm compared to the busy and chaotic Lagos. The infrastructure is stronger and better maintained here, with most streets paved and streetlights at most intersections. Reliable power can still be an issue, particularly for traffic signals, but where there’s a dead stoplight there’s a traffic warden, and cars seem to move rather smoothly.

There’s also less concern about crime here. With security so high due to the abundance of embassies and government buildings, crime really has nowhere to exist in Abuja. That isn’t to say that crime is nonexistent — there’s a reason that security walls ring major hotels, and random police checkpoints are scattered around the city after the sun goes down. But one feels safer walking down a random street in Abuja, versus a street in Lagos.

Getting around the city is fairly easy. Despite the fact that the layout is planned, the streets don’t follow a strict grid pattern like Washington D.C. or New York City. Instead, Abuja is divided into several distinct districts, with main artery roads running between them and crescent-shaped local streets peeling off.

Navigation in the city starts with districts instead of streets. Most visitors will spend the majority of their time in Wuse I, Wuse II, the Central Business District and Maitama. These zones have most of the hotels, restaurants and businesses that cater to a Western audience.

It’s fairly easy to grab a car or taxi at the airport (prices start from around N4500) without being harassed, and get into the city. Once there, taxis roam the streets and can be easily and safely hailed.

It is necessary to take a cab or a hired car between almost any two destinations – Abuja is so spread out that it’s nearly impossible to walk anywhere. Some hotels like the Hilton and the Sheraton are so big that it’s even a chore to walk to the edge of the property grounds. If you can muster the strength and the time though, it’s worth the trek, since cars and taxis outside the hotel gates are almost always cheaper than the vehicles provided by the hotels.

Movement around the city is fairly fluid and pleasant; enjoy the green, the clean and the changes in elevation while you can.

Like Lagos, Abuja is a business-oriented city, and doesn’t really cater to the leisure tourist. However, there are a few points of interest that can hold the non-business travelers attention for a day or two.

The ecumenical church and the national mosque are the two most striking landmarks in the city. Since Nigeria has a fairly open-minded attitude to religion, both structures are equally prominent on the city skyline, and both are centrally located within the city. Each is also architecturally impressive, though rumors circulate about the dilapidation already setting in to the exterior of the ecumenical church.

Should you want to experience a bit of nature, there are several options. Abuja itself is fairly green, and small valleys lush with water and foliage slalom through the city. Several of the city parks are built around these regions and make for decent walks during the day. Try out Riverplate Park in Wuse II for a good option, and when you’re finished have a pizza at the Garden Bar and Restaurant – it will be one of your best meals in Nigeria. 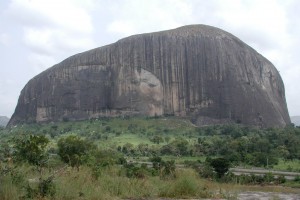 Of only marginal interest is Zuma Rock, the enormous monolith towering out of the landscape a few miles northwest of the airport. According to legend the rock is the gateway to the city of Abuja, but in actuality it’s little more than an enormous piece of stone adrift in the suburban countryside. Absolutely zero work has been put into developing it as a tourist destination, so, while it’s impressive to see, the only thing you can do is drive around it and then turn back. Even the hotel that once proudly sat at its base is now abandoned and eerily looking out over the brush. If you’re passing by, Zuma is worth a look — otherwise, Wikipedia will do it equal justice.

For a more interactive activity, it would be worthwhile to check out the table tennis area at the downtown Sheraton. Part of a larger workout facility, it’s the home base for the city’s table tennis fanatics, who are supported by the surrounding community and the local workers that staff the facility.

Those looking for a souvenir locally made in Nigeria can visit Wuse market, which carries a mixture of a tourist-oriented crafts and basic consumer goods. Divided into a few hundred stalls, the market sells everything from cheap plastic kids’ toys, to new and used clothing, to bolts of fabric, to a few local handicrafts. There is also a separate section for groceries and local produce.

Wuse market is fairly well organized and clean, with long paved rows separating banks of vendors. The community is friendly if not aloof, and while vendors will harass you to check out their shops and haggle over goods, they’re generally good natured and polite. Compared to the markets in Lagos, this place is heavenly.

Short of a trip to Wuse market, both the Hilton and Sheraton have small storefronts selling souvenirs sourced from Africa. While they don’t provide the same experience as a trip to the market, they certainly are more convenient. There is also a small artisan market across from the Sheraton, though its offerings are fairly limited.

If you’re after modern luxury goods, Abuja has plenty of upscale shopping malls. Ceddi Plaza is a favorite, and it counts Nike, Levi’s, and Pierre Cardin among the 55 specialty shops onsite. There’s also a multiplex movie theater, a beauty salon, children’s play area and three restaurants. Ceddi is located in the central business district.