We swirled and sniffed, searching for the aromas of nuts and red berries that we’d been told we would find. It was then time for the best part of any tasting ritual – sipping, but on this occasion there was no need for a spittoon. This wasn’t a visit to one of South Africa’s well-known wineries or a tutored tasting at a brandy distillery. As typically South African as both of those beverages seem today, they’re nothing compared to the drink we were learning to appreciate – rooibos tea.

There’s really nothing quite as quintessentially South African as a cup of rooibos. It’s available alongside the usual tea bags and coffee sachets in hotel rooms across the country; flavoured versions line supermarket shelves; top chefs use it to enhance some of their dishes; and it is even found in a host of beauty products, thanks to its many health-giving properties. Although it has only been grown as a commercial crop since the 1930s, rooibos’ roots go much deeper. It is widely agreed that the plant has been dried and turned into infusions since the San people, the country’s earliest inhabitants, were calling the Cederberg Mountains home. And it is here, in a region known for its long hot days, chilly nights and lack of rain that the hardy plant still grows today. 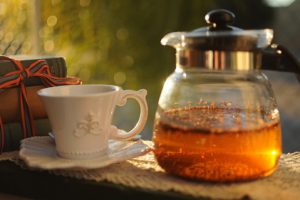 In fact, to be more precise, it is only here that the fine-leaved, bushy plant is found. The Cederberg is an arid and starkly beautiful region in the west of the country, a three-hour drive north of Cape Town. Here ochre-coloured rock formations jut out from the barren landscape like ostentatious sculptures. Here, millennia-old rock paintings etched by San hunter gatherers adorn the walls of the sandstone caves they would once have called home. And it is here – and only here – that Aspalathus linearis, better known as rooibos, is grown and harvested.

Rooibos – Afrikaans for ‘red bush’ – is an endemic plant, found in just a tiny swatch of the country deep within the Cederberg Mountains and in patchy pockets down towards the Atlantic coast. The centre of the industry, the “Rooibos Capital,” if you will, is the unassuming town of Clanwilliam, population 8,000. It is in this slow-paced, provincial town that Sanet Stander and her sister Marietjie spotted a gap in the market and opened the Rooibos Teahouse. As well as selling teas from 10 rooibos companies around the area, the teahouse offers a rare opportunity to take part in a tutored tea tasting.

“When we moved to Clanwilliam we noticed that, although this was the centre of the rooibos region, no-one was really doing anything to promote the tea and make it accessible to visitors,” Sanet said over a cup of flavoured organic tea whose orange peel and spice filled the room with the smells of Christmas. “We wanted people to have a reason to come to Clanwilliam and so we developed the teahouse.” There are now over 100 different teas on the menu. Some visitors buy a pot to enjoy in the garden, some buy a box or two to take home. We decided to sit down with Sanet to learn a little more about what goes into each teabag.

The tutored tasting allows you to sample a half-dozen different teas — or more correctly, infusions — as rooibos is not officially a tea at all. While your selections are brewing, Sanet talks you through the production process. Through photographs and props, she explained how the naturally-occurring plant has been adapted for small-scale agriculture, how the crop is still harvested by hand, and how the needle-like plants are transformed into an ultra-healthy infusion revered worldwide for its anti-oxidant properties. 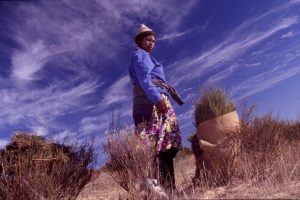 Sanet is passionate about rooibos, but there’s no substitute for seeing the process in action, so we headed to the African Dawn Estate, 20km west of Clanwilliam. Here rooibos is grown, harvested, bruised, fermented, and packaged all on site — a rarity since many rooibos farmers send their tea elsewhere to be processed. We climbed up into the 4×4 jeep with guide Chris du Plessis for the country’s only rooibos safari.

Tours start with the plant itself, an unassuming shrub, perhaps most notable for its colour. Contrary to what you might expect, the needle-like leaves are green, and while the branches have a red tinge to them, rooibos plants do not live up to their name. The crimson coloured stem does have an important role though — signalling the plant’s readiness for reaping. Once the red colour reaches the tips of the stems, it is time to harvest, something that happens in the height of the Cederberg summer (January to March).

The plants are harvested by hand, using scythes similar to those that have been used here for centuries. In fact, the entire process stays true to its roots, although machines are now used to chop and bruise the tea, rather than axes and hammers as was once the case. Once ‘bruised’, the rooibos is ‘fermented’ — an oxidation process that sees the tea dampened with water and laid out in the sun to dry, making for a photogenic stop on the tour.

The rooibos safari gives a great insight as to how this unlikely shrub ends up in your mug, but to get a true feel for rooibos, you need to head to the mountains. Deep within the Cederberg lies Wupperthal, a Moravian mission station home to around 500 people. The pace of life here is slow. Summers are long and oven-like, and winter nights can be freezing. Even when the weather permits activity, there’s not a great deal to do. Unemployment is rife, and save for the centuries-old shoe factory, a locally-run cosmetics company and some small-scale grass roots tourism, jobs are pretty much all provided by Wupperthal’s rooibos company. Close to 90 farmers grow and harvest rooibos in the area, and the entire local crop is produced organically. Wupperthal’s tea is South Africa’s only Fairtrade certified brand, something that Barend Salomo, MD of Wupperthal Original Rooibos acknowledges saved the local industry. “The rooibos industry has changed the local economy a lot and it’s thanks to our Fairtrade certification,” he says, beaming. “Because of Fairtrade, it makes sense for us to farm Rooibos, otherwise it would just be for the love of the product, we would not be able to profit from it.” 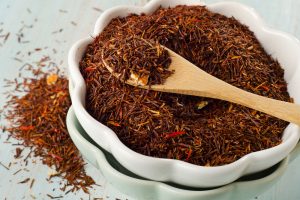 Rooibos is more than just the pillar of Wupperthal’s economy though. It is a source of local pride and an important part of the community’s history and culture. “When the missionaries came, there were seven Khoisan families living here using Rooibos for medicinal purposes,” explains Barend.  “Rooibos runs in our veins, and we are very proud to share our heritage with the rest of the world. It’s a rope that connects us to our past and leads us to a proud future.”

Wupperthal counts a tiny tea room among its whitewashed houses, but while Lekkerbekkie of course offers a pot of rooibos tea to the hardy travellers who venture along the rutted dirt track that leads to Wupperthal, there is no one here who can offer an in-depth tasting. For that, you have to visit Clanwilliam.

Our tasting with Sanet was drawing to a close as I sniffed and sipped rooibos blended with lemongrass, rooibos flavoured like blackcurrant, rooibos with chai spices, and the increasingly popular red cappuccino — a caffeine-free alternative to the usual frothy coffee. The tea has far surpassed its humble roots, gaining a loyal fan club along the way.

Michael Douglas and Catherine Zeta Jones apparently served rooibos ice cream at their wedding, Duran Duran frontman Simon Le Bon is said to never go on stage without a cup, Oprah Winfrey used it in a special tea blend designed for Starbucks, and Canadian rock band The Stills even wrote a song inspired by it. It is revered for its health-promoting properties, and found in specialist LA teahouses, but there’s more to rooibos than mere nutrition. This is tea with character, tea with a history. It’s a singularly South African beverage, whose culture is every bit as important as its flavour, and the only way to enjoy both together is to make the worthy trek to the Cederberg.