South Africa’s Western Cape is well-trodden. From the bars, galleries and beaches of Cape Town, through the winelands’ restaurants, the Garden Route’s forests, and the coastal towns of the Overberg, this is a province where it’s tough to wander far from the beaten path. But that’s not to say it’s impossible. Offbeat towns do exist and there are few as tiny and tough to reach as the rather unwelcomingly-named hamlet of Die Hel (The Hell). Getting here by yourself is possible, but you need a 4WD vehicle and nerves of steel to navigate the snaking dirt road (road to hell) that offers the only access to Die Hel. 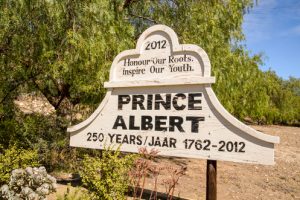 The problem is, I’m a colossal wimp when it comes to mountain passes. I’m perhaps not quite as bad as my father, who once cowered in the back seat footwell of our car while my mum tackled some winding California roads, but I don’t like driving them. Actually, I don’t much care for being a passenger on a vertiginous road either, so it took a rather large leap of faith to join a guided tour to one of the Western Cape’s toughest-to-reach settlements. I choose Lindsay Steyn, a guide based in the utterly charming Karoo town of Prince Albert, five hours from Cape Town.

Prince Albert is something of a magnet for foodie types looking to escape South Africa’s big cities, so every meal is a treat, offering a blend of local produce and culinary skill. When Lindsay collected me from a café on the town’s main road, I was polishing off my second freshly baked scone slathered in cream from the local dairy. Bringing my bag of just-purchased dried figs, grown in the town’s surrounds, I joined Terence and Myra, a British couple taking an extended tour of the entire country and we set off for Gamkaskloof.

Gamkaskloof is the actual name for this narrow valley amid the Swartberg Mountains, and the name that its few remaining residents prefer to use. No one is quite sure where the “Hell” nickname came from, but it certainly stuck, with most outsiders using this instead of the official moniker. We would learn more about the isolated valley’s history later, but first we were treated to a quick detour atop the Swartberg Pass, a much-talked-about road that I, of course, had never dared to drive. 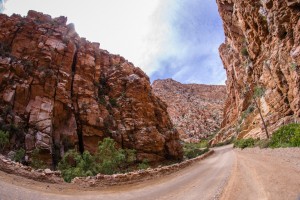 The Swartberg Pass, a vertiginous dirt road hugging the sides of the Swartberg Mountains, is one of famed South African engineer Thomas Bain’s greatest accomplishments. It took Bain — and 200 local convicts — four years to finish the pass, and when it opened in 1888, it was one of the most spectacularly scenic roads in the country. It still is today, and driving the 27km from Oudtshoorn to Prince Albert — or if you’re particularly brave and energetic, cycling — is one of the top things to do in this area.

Although we didn’t have time to drive the pass, the short section we covered to reach the first lookout point was enough to demonstrate how amazing this road is — not only for its surrounds, but also from an engineering standpoint. But it is not the only impressive road in the region, and we had a prior engagement with the Swartberg Pass’s less famous cousin, so we backtracked towards Prince Albert to begin our journey.

The turn-off for Gamkaskloof comes with a warning of sorts. Alongside the usual indicator of how many kilometres the journey is, the signpost also informs drivers that this 37km road takes two hours to travel. The road is a triple whammy of everything I hate when driving — narrow, rubble-strewn, and later on, filled with dizzying switchbacks. Luckily, I wasn’t driving, and Lindsay’s assertion that he had tackled the road some 400 times allowed me to relax and enjoy the surrounds.

Despite its, well, hell-like climate — high temperatures and a lack of rain — the valley is full of life. We glimpsed klipspringer, a diminutive antelope species, nimbly leaping from rock to rock and tried to tick off a few of the 150-plus bird species that call Gamkaskloof home.

Even with Lindsay’s expertise navigating the pass, when we reached the 4km-stretch of hairpin bends that take you on a steep descent into the valley bed, I stopped bird-watching and started teeth-grinding.

The road was constructed in 1962, but rather than bringing the outside world to this remote slice of the Cape, it spelled the end of a community that had lived here for some 130 years.

Legend has it that a 19th-century farmer happened upon the valley when searching for some cattle that had wandered off in the night. No matter how they ended up here, trekboers, wandering farmers who migrated inland from Cape Town, lived here with their families and their flocks for a little over a century. Gamkaskloof was about as cut off from society as a settlement could be. Getting in and out of the valley involved multi-day treks scrambling along rocky paths or a short-but-steep hike along a route tellingly known as “The Ladder.” 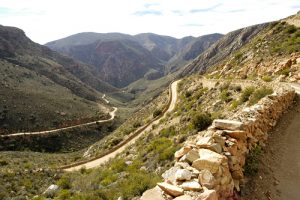 “The Road To Hell” – dirt road through Swartberg Pass (Shutterstock)

Then in the 1960s, the road was built, and within 30 years, every one of the 120-or-so inhabitants had left the valley, many of them later selling their property to Cape Nature. Today, Gamkaskloof forms a part of the Swartberg Nature Reserve, but there is still a connection to its peopled past. Annetjie Joubert, born and bred in Hell, now runs a restaurant and guest house in the valley. Here you can enjoy a hearty, traditional lunch, and stock up on dried fruit, moonshine, and homemade preserves before exploring some of the curiosities of the settlement.

The first car to ever arrive in the valley is still there, a Morris Minor that predated the road by four years. Two brothers living here dragged it through the mountains with the help of the 4WD vehicle of the day — a team of hardy donkeys. It sits rusted and worn amid the old but still-in-use buildings, which date back to Hell’s heyday. Most of the old farm cottages have been restored, and are now offered by Cape Nature as self-catering accommodation.

There’s a surprising amount to do in the valley, from picnics and fishing, to mountain bike trails and a trip back in time in the form of a four-day, 25km donkey trail to Calitzdorp. For day-trippers like us though, there was just enough time for a visit to the information centre to stock up on local folklore and flora facts before beginning the 2½-hour journey back to Prince Albert.

A century or so ago, it might well have been a little hell-like to attempt a visit to Gamkaskloof, but today, the trip holds something for photographers, avian enthusiasts, history buffs, and outdoor adventurers alike. Even the biggest dirt-road wimps will enjoy the ride — and that I can personally guarantee.