I had mixed feelings about the sunrise. On the one hand, I’d never been so happy to see the light of day, or more precisely, to feel the warmth of the sun’s rays as they peeped over the horizon. But I was also sad to see the back of the night, a night we’d spent chatting about everything, counting shooting stars, and huddling together under a rented blanket as the temperature chilled our bones as only night time in the desert can. I hadn’t expected a spiritual experience, despite the destination. Mount Sinai receives pilgrims from a melange of faiths – Jews, Muslims, and Christians all flock to this sacred spot. I am none of the above, and while religious sites often wow me, it is usually for their architectural beauty more than their spiritual side — hiking on Mount Sinai would be different.

I found the hike to the 2285-meter summit a deeply moving and ultimately relaxing experience, though it was not without its challenges. The walk itself is a fairly straightforward uphill hike that generally takes around three hours, but the first test is actually staying awake long enough to get to the starting line. The walk is traditionally done at night, so I forced myself to take an evening nap before boarding a minibus in Dahab at 11 p.m. The two-hour drive allowed for further dozing, meaning that by the time we reached the foot of the mountain I was pretty much ready for a full-on slumber. The last thing I wanted to do was tie up my hiking boots and climb a mountain. This is the very mountain that Moses is thought to have climbed in order to receive the Ten Commandments from God, and the 750 steps that make up the second part of the climb lead to the cave where he is said to have waited. 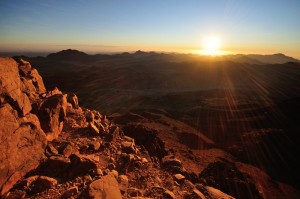 I’m not generally competitive when it comes to sports and have certainly never been a first-to-the-top kind of hiker. It wasn’t a desire to win that saw me charge away from the pack and pant up the first section of the mountain. But the Mount Sinai hike is a particularly popular one, and I quickly realized that I wanted a little solitude with my starlight. I strapped on my head torch and powered away from my travel companions, putting enough distance between us to feel alone on the mountain while trying to give those ahead their own piece of privacy.

Out-and-back hikes can often be a bit tedious on the return leg, but at Mount Sinai, the scenery is largely saved until later. On the way up, it’s just you and your torch, working together to try and keep to the path. That’s not to say that there’s nothing to look at – in fact, the silhouetted rocks create as striking a backdrop as you could wish for, leaving you looking forward to seeing the fully-lit version on the way back down. Not that the rocks aren’t gorgeous in themselves, but the most impressive scenery is the celestial kind, and every so often, when I found myself almost alone, I switched off the torch to fully appreciate the ceiling of stars dotting a blissfully cloud-free sky. I wouldn’t find that cloudless sky quite so blissful later on, when the exertion would end and the chill would begin, but for now, Orion and Sirius were proving to be the best hiking companions you could ask for.

It took a little over 90 minutes of power-walking to reach the top of the mountain, where I joined two of my faster counterparts on what, in the warm light of the day, turned out to be a rather precarious ledge. For now, it was still dark and we had no idea a 10-meter drop waited just inches from where we sat. We rented a mattress and a couple of thick blankets and questioned the intelligence of our hasty hike. Sure we’d found a little alone time en route to the top, but now we had a long and chilly pause as we waited for the sun to rise. 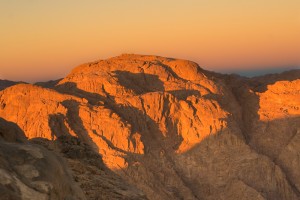 We counted shooting stars while waiting for the rest of our group to arrive, struggling to imagine a finer way to spend a couple of hours. Just when the cold really began to take hold and spirits were dipping, the merest suggestion of an orange glimmer heralded the arrival of the sun and we all sat in awe as a pink orb peeped over distant mountains. Hundreds of hikers had now gathered and collective ‘oohs’ and ‘aahs’ of the ilk usually reserved for fireworks displays resonated around the mountain top. The sounds of awe were as much for the otherworldly landscape, previously hidden from view, as for the sunrise, so utterly perfect that it could have been something drawn for the opening scene of a Disney cartoon.

In an instant we were stripping off the layers, as the sun transformed the Sinai Desert from fridge to oven. And as we returned our rented linen and peeled off hats and scarves, the sound of singing began to ring out on the mountaintop. It almost seemed as though the group of grey haired Korean pilgrims had been hired as part of a sound and light show, their joyful voices providing the perfect soundtrack to the well-rehearsed sunrise spectacular.

As we overtook pooping camels and tired trekkers on the way back down, the air was filled with high spirits, the knowing camaraderie of those who have just shared in an enlightening experience. And the experience continued as we took in the surrounds of our descent – layers of rolling mountains, like folded cloth in varying shades of beige and there, at the bottom, St Catherine’s Monastery, looking a lot like a movie set mirage.

We struggled to stay awake as we waited for St Catherine’s to open. Built in the 6th century, the orthodox monastery sits at the foot of Mount Sinai and attracts as many pilgrims as the mountain itself. Its official name is rather more impressive: Sacred Monastery of the God-Trodden Mount Sinai, and it is thought to be the site of the Burning Bush, from which God is said to have spoken to Moses.

The fort-like structure is impressive both inside and out, but I didn’t stick around for long. After the freeing feel of a solitary hike and the vast and empty expanse revealed to us as the sun began to emerge, the hundreds of hikers shuffling through the church’s pretty interior filled me with a sense of claustrophobia.

For some, the spiritual side comes from visiting the monastery or the mosque sitting at the mountain’s peak. Some come here to feel closer to their god, but nothing filled me with more serenity than that star-speckled sky gradually working through shades of orange, pink, and purple, to the glorious blue desert sky of the early morning. Whatever your religion, or if you have none at all, it’s easy to understand why this is a place of spirituality, and very difficult to leave without feeling somehow moved.