Wikivoyage’s entry on Lagos jokingly declares that “Lagos is for tourists like England is for food,” and it’s a pretty accurate depiction. While Lagos Island has some interesting religious and government buildings, there aren’t many great monuments, parks or works of architecture to gape over in the city — things here are far too pragmatic. Which is why it’s worth making the effort to take some half-day trips from Lagos, in order to widen your perspective.

Though the city’s bars, restaurants and street markets, are perfect for observing the chaotic bustle of city life, some interesting waypoints for a visitor really exist at the edges of the city, where space is more available and the chaos is a bit dulled.

Partially funded by the oil corporation across the street, the Lekki Conservation Centre makes a decent attempt at showcasing some of the region’s native flora and fauna. The conservation center consists of several small buildings surrounding a large, thatch-roof atrium and meeting area. Behind the village there’s then a series of trails that lead into the jungle.

The main pathway forms a 2km figure-eight loop on raised, well-maintained wooden decking. The swampy jungle quickly envelops the trail as it leaves the main atrium, and depending on the time of day, you’ll immediately see signs of wildlife. Keep an eye out for the numerous friendly (but not TOO friendly) mona monkeys that bounce among the trees. Monitor lizards, colorful birds and even alligators roam through the swamp, and if you’re lucky, you can snap a few pictures.

Several points of interest along the trail make for great picnic or resting points, including a bird watching hut, a playground and pavilion and even a tree house high up in the canopy. The latter involves a dizzying climb up the side of a tree on a protected wooden ladder that offers a great view around the surrounding area.

The view of the wildlife and plants is the best thing that you’ll get out of the conservation area. There isn’t a great deal of public information on the trail or at the main compound, and there certainly isn’t a gift shop or an organized historical profile of the area. If you walk around the park on your own, there are only a few signs to provide information. Docents can take you around for a small fee, and the money will be well spent. It’s a nice walk through the jungle, and the time on the trail is a great respite from busy life in Lagos.

The Lekki Conservation Center is about eight miles east of Victoria Island on the Lekki-Epe expressway. Follow the highway past roundabout seven and the conservation center will be on your right across from the Chevron headquarters. Entry is N500 per person.

Many describe the late Fela Kuti as royalty among musicians in Africa, and his son, Femi Kuti is part of that legacy. The pair invested a large part of that legacy in the New Afrika Shrine, a cavernous warehouse of a space in north Ikeja on the mainland.

The Shrine hosts musical venues and dance parties every night, and Femi himself takes to the stage most Sundays to perform with his enormous band. 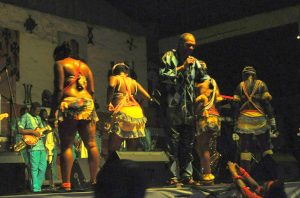 Inside, the space is festive and warm, with rope lights around the perimeter and tiers of plastic seats stacked behind a large dance floor and stage. There are quieter balconies on either side, and the back of the venue has a bar and several vendors selling a variety of beer, suya (grilled meat) and even ice cream.

Head up to the tier of your choice and wait for an assistant to come around — he’ll bring out a table and chairs for a small tip. Food and trinket vendors will also pass frequently, so you can get full service at your table.

On Sundays, the atmosphere can get very charged as Femi, his band, and even members of his family dance around the stage in costume. Revelers weave around the dance floor in various states of hysteria while hawkers dart around tables full of grilled food and tall beer bottles. To his credit, Femi makes it to the front of the stage to fist bump each person who approaches, many of whom go up several times a night.

If that sounds too intense for you, try stopping by on a Thursday night for “rehearsal,” which is effectively a show without any of the costumes. During these times, everything is even more laid back with lighter crowds, quieter music and no cover charge. Admission otherwise is around N 500.

Afrika Shrine attracts a wide range of visitors, from local Lagosians, to foreigners passing through town. Considering the traffic, a small economy has formed outside of the shrine, with several perpendicular streets closed off and a huge spectrum of food and alcohol vendors. It’s clear that many come here just to hang out — not just for the music — and it’s worth coming a bit early to mosey around the street and take in the scene.

To get to the shrine you’ll need to arrange transportation to Ikeja, which is on the mainland. The ride from Lagos and Victoria Island will take 45 to 60 minutes, provided traffic isn’t an issue. Bear in mind that rush hour towards the mainland starts at 4pm and continues until around 7 or 8pm, so factor that into your travel.

Musicians vary during the week with Femi and his band rehearsing most Thursdays and playing a show most Sundays. The shrine’s Facebook page usually keeps up with the daily happenings, so it’s best to check that site before making the long trip out to Ikeja. Once you get there though, it’s well worth the visit.