Though there are many horror stories about the traffic and public transportation systems in Lagos, most of them are severely exaggerated. It’s true that traffic in the city can be terrible, but it can also be quite light, and getting around Lagos Nigeria doesn’t have to be a nightmare. Some careful planning around rush hours and carefully choosing which mode of transit to take will ameliorate most of the congestion in your journey.

One thing should be made clear though: Lagos is not a walkable city. Few points of interest are even within walking distance from one another and there is no strip of interesting restaurants or a central museum/tourist district. You’ll need to take a car almost everywhere, and since rentals can be hard to come by in the city, you’ll need to rely on taxis, public transportation, or friends with vehicles.

When you arrive at Murtala Muhammed International Airport you can expect to find taxis and hire cars outside of the main arrivals terminal (don’t bother trying to grab a cab from the arrivals hall — cabbies aren’t legally allowed to pick up passengers there). It’s possible to get an official yellow-striped city cab here or hire a private car by engaging with one of the touts, and the fee should be around N5000. If you’re not interested in engaging with the touts, simply brush them away with a polite wave.

Once in the city, your options are primarily yellow city taxis, private cars or minibuses. Though they’re almost always in some state of disrepair, yellow cabs are generally safe and ubiquitous. You can identify them by their painted stripes and numbers and it’s easy to flag them from the streets at most points in Lagos. Private cars are usually booked through hotels and are almost infallibly safe, reliable and costly. 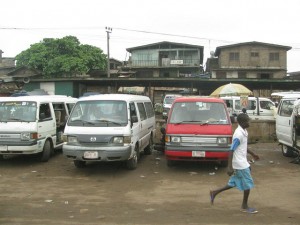 City minibuses roam the roads and can be picked up on the fly by heading to a main street and watching the traffic flow. There isn’t really a published route map to reference, so just make sure you’re headed in the right direction, and ask lots of questions. There’s usually a helper on each bus that will collect your fare and pull in other riders, so you can use him or her as a reference.

Many of the city minibuses connect through a hub on Lagos Island near Christ’s Cathedral (CMS). If you’re looking to take a longer route, say from Lekki to the mainland, you’ll likely need to connect through this point and onward. Finding the right minibus at CMS can be a challenge, so make sure you speak with your helper onboard the inbound bus and get directions.

Okadas, or motorcycle taxis, are also an option, but they are only available on Lekki and the mainland (they’ve been banned on Lagos and Victoria Islands). Instead, rickshaws, locally know as “kks,” roam many of the city streets in Victoria and Lagos. It’s possible to flag one of those in the same way that you would flag a cab, but note that kks will pick up multiple passengers, so be prepared to share your space.

At all points in the city it is essential to agree on a fee before agreeing to get in any vehicle. For yellow taxis, just stick your head in the passenger window and ask for a rate to your destination. Be prepared to haggle; hired drivers will usually try to gouge you deeper than city cabs, so don’t feel bad turning them away for another offer.

It’s also worth noting that taxis and local drivers hang out just outside of most hotels looking to pick up riders. You can usually get a 25% – 50% discount on a hired car outside the hotel grounds (or gate). It’s possible to negotiate an hourly rate for a hired car, for example if you need a ride to dinner and back. For 2-3 hours, the cost will usually run around N6000.

Costs scale in tandem with the quality of the transportation. Traveling between Lagos and Victoria Island, I found most private hotel cars wanted to charge around N4000, while city cabs ranged from N2000 down to N1000. Kks and minibuses ranged from a few hundred naira to N500. 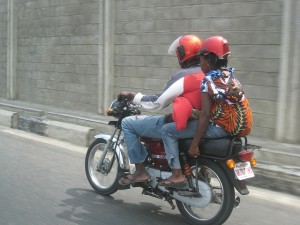 By and large, security  is very good among the different public and private transportation options. Due to safety and congestion issues, okadas were banned from the islands several years ago, so most travelers via public transportation can feel at least reasonably protected. The drivers that I met were all pleasant and indifferent to my presence. None tried to gouge me beyond the normal hotel rates, and many were quite gregarious, though it was a little bit difficult to communicate. At several points I felt guilty for leaving a driver outside of a nice restaurant while I took an hour or two to have dinner, but they all are used to killing time with other drivers or with their smartphone video games — for them it’s part of the job.

Do note, however, that the driving style in Lagos is much more aggressive than in the west. Lanes are almost nonexistent, stop lights are fickle at best, and every vehicle wears scars from numerous bumps and tangles along the road. On my way to the mainland one night I witnessed two minibuses slowly merge into one another at 60mph on the expressway, then slowly detach and exchange obscenities before continuing forward undeterred.

Keep in mind that traffic can be a challenge over long distances as well. Though it’s not as bad as media reports may have you believe, traveling during rush hour can be time consuming, so it’s best to avoid long commutes during that time. The worst points of congestion are from the mainland into Lagos Island in the morning (when workers are coming into the city) and similarly from Lagos Island back to the mainland in the evening.

In general, however, traffic and public transportation and far less daunting than one would expect from the second-biggest city in Africa. It’s best to start by setting expectations low and knowing that a few bumps and scrapes will happen along the way. Once you accept those realities, you’ll be pleasantly surprised by the journey.