Swakopmund is rapidly becoming a tourist hot spot, thanks to its plethora of thrill-seeking adventures where visitors can tackle sandboarding, skydiving in the middle of the desert and catch the rough waves off the coast. But for the rest of us who aren’t too keen on the idea of jumping out of a plane, there’s plenty of ways to explore Swakopmund without feeling like you’re on a suicide mission. Or maybe you have been dabbling in all these hair-raising adventures and looking to take a break. Get ready for a relaxing retreat in this beloved Namibian city. beloved city of Namibia. Here are the three chill things to do in Swakopmund.

Aren’t you curious how the riveting Swakopmund became the tourist hub it is today? Make a visit to the Swakopmund Museum by the water (near the iconic lighthouse), where an impressive display of cultural artifacts will fill you in. For starters, you’ll learn many of the traditions and customs of different ethnic groups of Namibians. The museum shares the history of the city as a harbor port and in the early days, inland farmers would travel to Swakopmund to find relief from the unforgivable heat. The arrival of German colonists turned the city into predominately European-run and Bavarian architecture started to consume the area. In the early 50s, a small-time German dentist, Dr. Alfons Weber would often travel out of town for his business (since Swakopmund was too small for his practice). During his travels, he would collect artifacts and cultural goods and bring it home with him. In 1951, he decided to turn his impressive collection into a brick-and-mortar museum that is now known as the Swakopmund Museum.

In addition to the artifacts, there are displays of taxidermy animals and bones that are local the area, so guests can be informed of what to look out for during their safaris. However, if you’re in the city during the first week of the month, you’ll want to check out the Rossing Uranium Mine tour. The tour is held every first Friday of the month and guests will get to visit Namibia’s longest-running uranium mine (and let’s admit it, that’s a pretty chill way to get some adventure during your visit). 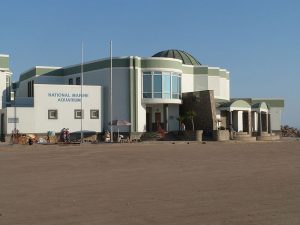 Meet the sharks at National Marine Aquarium of Namibia

Do you get seasick easily and stress out that your group of traveling friends want to sail the rough waves for a dose of the ocean? Well no worries, because you can still check out the marine wildlife that’s found throughout the coastal waters at the National Marine Aquarium of Namibia. The aquarium is located by the shore and opens everyday of the week except Mondays. Expect to find an impressive collection of marine wildlife like the ragged-tooth shark, green turtle, African penguin, octopus, blue-spotted stingrays, cape fur seals and more. You’ll also find less-seen species that you’d be hard-pressed to find at other aquariums on the planet such as the horseshoe sea cucumber, crumb-of-bread sponge, kelp gull and shyshark. You can’t miss the star-of-the-show, the glass tunnel that transports you into the underwater world. There, you’ll watch sharks and fish swim above you while you can inspect them up close (take that sea-worthy friends!).

Cleanse your aura at Kristall Galerie

Whether you’re into spiritual stuff such as “harnessing your chi” and “cleansing your aura” or simply just have an admiration of nature-made marvels, you’ll want to check out Kristall Galerie. The thing that makes this place so special is that you’ll come across an incredible collection of giant clusters of crystal, namely quartz crystals of enormous size (think the size of a rhino). You’ll also find some of the world’s largest whole pieces of crystals here and get to admire some of the prettiest rock formations known to mankind up close. After enjoying the galerie, you can visit the craft area to watch local gem artists transform the rocks into exquisite pieces of jewelry. A coffee bar is onsite that overlooks a gem garden featuring giant, shimmering rocks in the midst of plants.

Much like the Swakopmund Museum, Kristall Galerie was turned into a museum after a prolific gemstone and crystal collector, Johannes Aolf Kleynhans decided to put all his valued possessions into an exhibit. So head down there and take a selfie with some of the world’s most expensive crystals. But don’t worry, you can take a gem or two home from the onsite gemshop as a personal souvenir of your laid-back trip to Swakopmund.