Did you know that Africa is home to one of the largest tortoises in the world? Because of their remarkable size and due to being found in just a few spots, primarily in Seychelles’ Aldabra Atoll, they remain a popular tourist attraction. Visitors can view them in a well-run conservation sanctuary or watch them lounge on the beaches like giant lumps of rocks. But before you go admire these gentle giants, arm yourself with some interesting facts about them. Here are 7 interesting things you didn’t know about Aldabra Giant Tortoises. 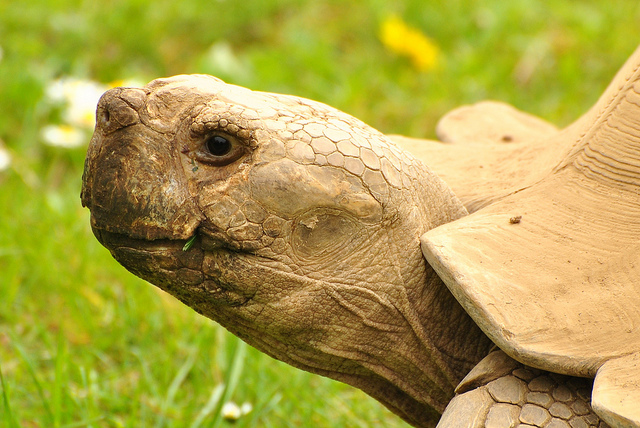 They’re one of the longest living creatures on Earth

It’s believed that the Aldabra giant tortoise can live up to 200 years, but it’s difficult to research and confirm their average lifespan since they tend to outlive their researchers. The most well-researched tortoise was named Adwaita, who was transported to a zoo in India during the 18th century. He was born in 1750 and died in 2006, marking him as the oldest documented tortoise at 255 years old. And he didn’t even die of natural causes! 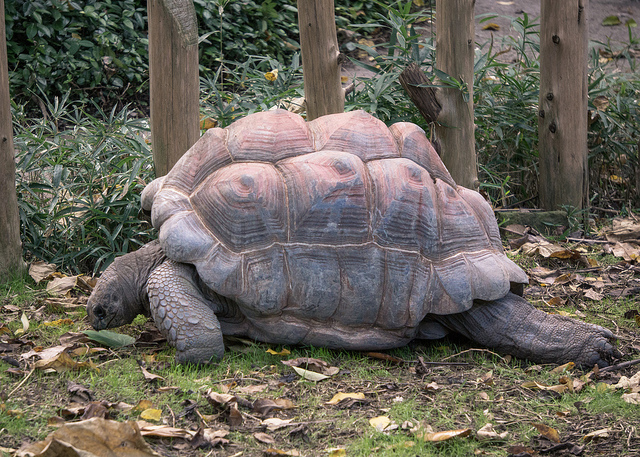 They live in two type of shells

Not every tortoise looks alike. When admiring a group of tortoises, you may notice that some of them have dome-shaped shells while others have shells with flat tops. Thanks to the evolutionary process, the tortoises that live in areas where their main source of food can be found on the ground have the dome-shaped shells, allowing them to stretch their necks downward to forage. The other tortoises found in areas where food is above the ground have flatter shells which allows their necks to croon upwards to reach for their meals. 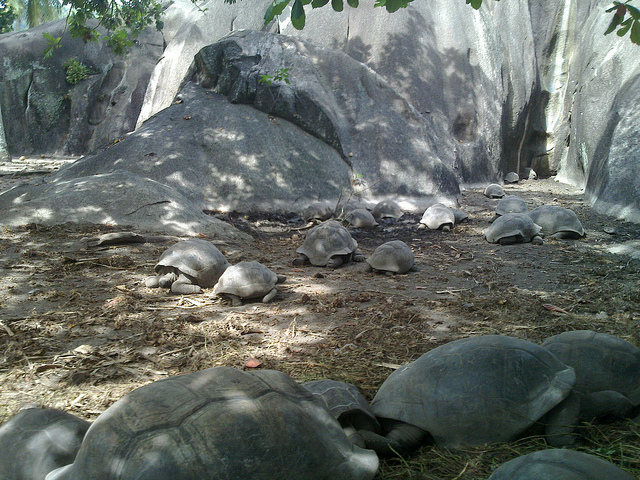 They outlived 17 other giant tortoise species on the island

Seychelles used to be a haven of 18 giant tortoise species, but only one is left on the island. The 17 species went extinct due to over hunting and egg collecting. Aldabra Giant Tortoises outlived the rest most likely due to their unusually long lifespans, but it doesn’t mean they’re out of harm’s way. Their population is declining due to climate change, lack of food, deforestation, illegal hunting and vulnerability to predators. 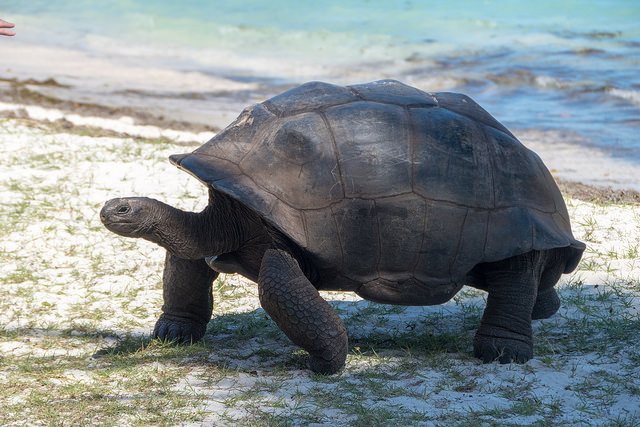 They play an important role in the ecosystem

Thanks to their enormous size, other wildlife depend on the tortoises to pave the way in the wild by making game trails during their search for food. This gives other animals less work to forage their way through the wilderness and see potential predators in the nearly-paved clearings. The seeds found in their excrement also plays an integral role in the wilderness as it provides energy for new plant growth that’s nutritious for other wildlife.

It’s advised to see them anytime from February to May

The reason for this specific set of months? It’s mating season for the giant tortoises and visitors can increase their chances of witnessing a hatching of baby tortoises. A female giant tortoise can lay eggs at least twice a year or once every few years depending on the size of her group to avoid interbreeding. Once she’s ready to lay her eggs, she can give birth to up to 25 eggs. Visitors sometimes report seeing eggs the size of tennis balls. 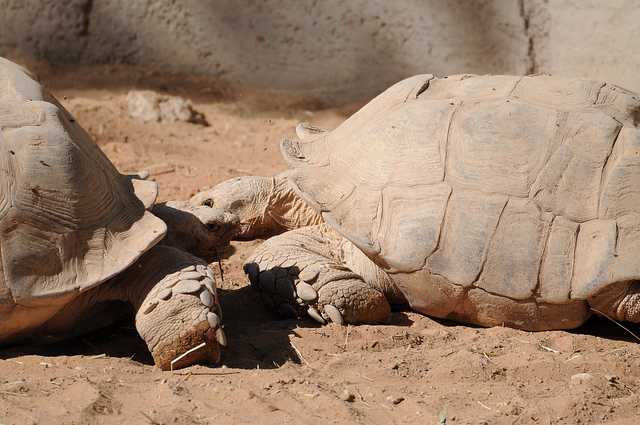 They are occasionally cannibals

This doesn’t happen often, but once in a blue moon, cannibalism between two tortoises occurs when food is scarce. They are naturally herbivores, feeding on plants, roots and stems. but on rare occurrences when there is an extreme shortage of food supply, they will turn to much smaller tortoises and start eating them. They’re likely to only eat their own kind since they’re the only species that cannot outrun their extremely slow pace. 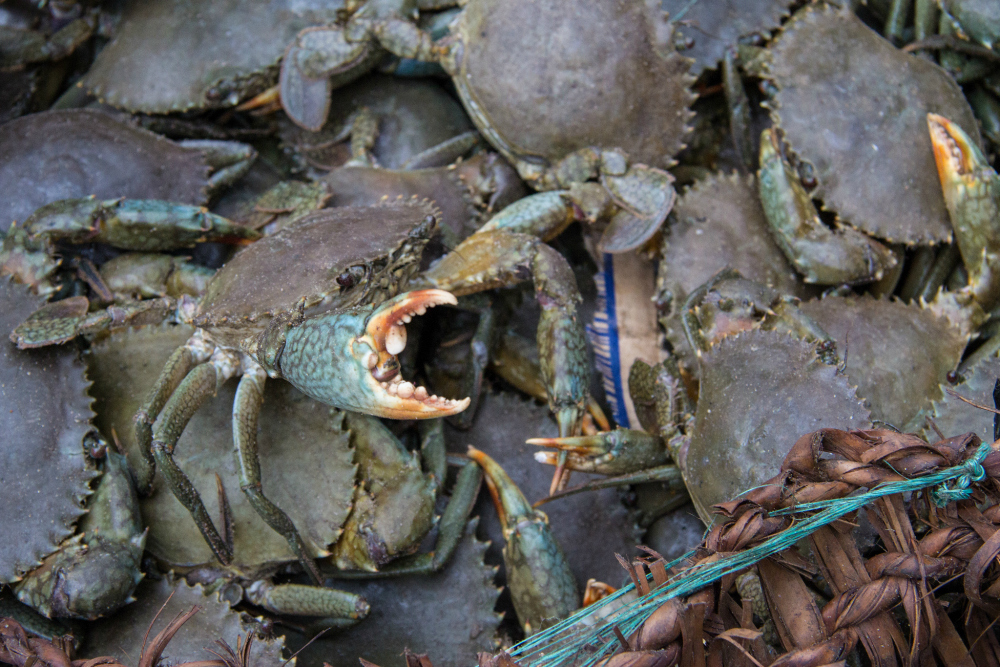 Their predators are not what you think

Their predators probably aren’t what you thought they would be. Other than humans that illegally hunt them, we’re more likely to imagine a great white shark nabbing them in the ocean. However, their biggest predators are actually goats (yes, you heard us right), dogs and crabs. When dogs and goats are hungry, they’ll head to the shores or inland to look for potential meals and unfortunately, that includes the giant tortoise. There’s also a large species of crab on the shore that will turn to baby tortoises for meals. The unnatural predators of dogs and goats hurt the tortoise’s chances at survival and is one of the major contributing factors to their rapidly declining population.

You Can’t See Me: The Most Camouflaged Animals And Insects Of Africa

Which Seychelles Island Is For You?