Do you remember the part in “Raiders of the Lost Ark” when Indiana Jones is faced with Nazis in the middle of the rocky dessert? And it’s not long before he’s embroiled in a lengthy battle with them before the final glorious, iconic scene of the Nazis’ face melting off like over a bonfire? Did you ever wonder where they were? That landscape that resembles Mars is Sidi Bouhlel in southern Tunisia, very near the Algerian border, a barren land that makes an unforgiving living environment but an excellent movie setting. 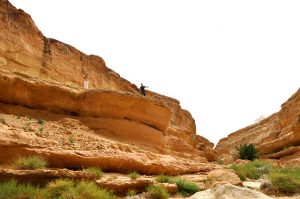 Courtesy of Panegyrics of Granovetter/Flickr.com

The nearest town in Sidi Bouhlel is the abandoned village of Tozeur, or as it’s more popularly known as “Star Wars Canyon” because (that’s right, you got it) “Star Wars” was partially filmed there. We remember Luke Skywalker’s and Anakin being raised on Tatooine, and how isolated the region was. Today, visitors can stop by the village to see the movie set still standing as if their pre-demolished days has never came.  Nearby is Hotel Marhala in Nefta, an overnight accommodation where die-hard “Star Wars” fans can stay overnight in cave rooms and live their dreams of being residents of Tatooine. The rooms are hollowed out inside caves, giving guests a camping experience and a glimpse of how the locals live. Back in Sidi Bouhlel, avid fans will recognize the familiar backdrop where Luke Skywalker gets rescued by Obi-Wan Kenobi right after R2D2 was kidnapped. Although the ravine is overshadowed by more popular films like “Star Wars” and “Indiana Jones” titles, lesser known films have taken advantage of the location for their sets like in “The English Patient” where Ralph Fiennes and Kristin Scott Thomas were filmed necking romantically. 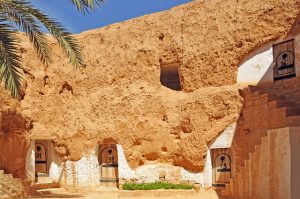 Whether you’re a huge fan of the films or not, there’s no denying the majestic landscape of Sidi Bouhlel. The reddish tan canyon is a geological marvel made of sandstone so delicate that it can crumble into pieces if you step on a small piece of rock. Despite the desolate land that seems inhabitable for any living creatures, Sidi Bouhlel has its own small waterfall in the heart of its canyon that empties into a small body of water. It almost looks like a water slide you’d find at a luxury resort in Orlando. Keep in mind, Sidi Bouhlel isn’t a place that anyone can explore. The canyon makes it difficult to traverse and it’s advised that only able-bodied visitors explore the land (smaller children and elderly people will find it difficult to get to) since getting to the ravine requires hill climbing. But the hard work of climbing to get to the canyon in its full splendor is well worth the excursion. 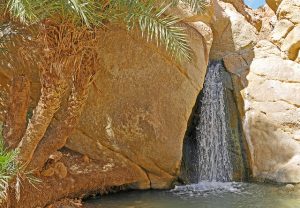 You can also get a dose of local culture in the nearby town of Nefta (home of Hotel Marhala) to see how villagers live. Nefta was founded by Sufis and is rich in its mystical Islamic history. In fact, the town is considered to be the spiritual location for Sufism. Approximately 24 mosques are situated in this town, attracting Sufi Muslims from hundreds of miles around to make their pilgrimage to Nefta to pray. Today, there are approximately 21,000 residents, many of them living in clay houses like you’d see in Tatooine. Visitors can opt to stay at Hotel Dar Hi, a luxury resort perched on a hill, giving guests a spectacular view of the village and the surrounding red desert. Nefta has two sections of the town; old and new, and visitors can explore the unique architecture and browse through its souk in the heart of its town. Other high-end hotels worth considering in Nefta are the Caravanserail Hotel and Thermal Oasis Hotel & Spa. Although the surrounding land of Nefta, Tozeur and Sidi Bouhlel are prime for its mystical religion and history — film buffs can’t seem to stay away. And it works to benefit of local businesses since they profit more from the filming tourism. It is after all, their own version of a galaxy far far away.

Where To See Game Of Thrones Sets In Morocco

A Photographic Tour Of Djerba, Tunisia