Imagine stepping out of your vehicle to come across a lake of hardened pink (sometimes red) globs with occasional mummified remains of animals like you’d see in a science fiction film. That vision is a reality when you visit the 35-mile long Lake Natron in northern Tanzania near the border of Kenya. Lake Natron is dangerously high in saline that results in bacteria accumulation that can turn the water into this pinkish hue. However, despite the undrinkable water, many animals and birds retreat to the area as their safe haven. Thanks to the undesirable water, it steers off any threatening predators for the smaller wildlife that frequently find themselves at the bottom of the food chain elsewhere.

The lake isn’t the only thing that is showing off its pink colors, flamingos have made the lake its home year-round. It’s possible for wildlife to survive in this salt and soda lake since birds like the flamingos can feed on its algae and build their nests on its mud flats since the land is so dry. Tourists visiting the lake to find mummified creatures floating idly on the water may be responsible for a common misconception that the lake is extremely dangerous to venture through. In reality, the skeletal remains are only an aftermath of animals that have passed away of natural causes. The lake has a rapid evaporation rate that increases the decomposition. Unfortunately, the flamingos are facing near extinction as the lake continues to dry up, making the land more inhabitable for them than they can handle. 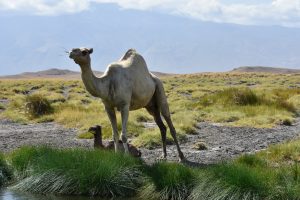 Lake Natron is nestled at the foothills of a mountainous terrain where it’s common to spot larger wildlife like zebras, lions and camels (yes, camels). Nearby are other lakes that sport its same unique color and unsavory, saline-infested landscape like Lake Magadi. The cluster of pink lakes are so out of the ordinary in the continent that astronauts can often see a spot of pink from space. Tourists will stay in various campsites near the lake to take in the full splendor of its haunting beauty, the droves of pink birds, and larger wildlife that seek solace in the land. Active visitors will go out of their way to Ol Doinyo Lengai which translates as “Mountain of God” in Maasai. It is an odd-shaped,  7,650-foot-tall active volcano by the southern part of the lake where nature enthusiasts can hike. Due to the location of the volcano, its lava secretes a different ingredient than you’d find in other volcanoes around the world. Rich in sodium, the lava is a carbonatite, allowing it to molt to black right away during eruption and quickly dries out. 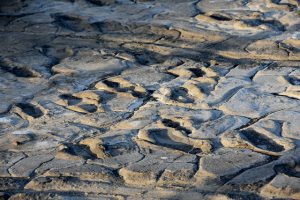 History lovers, there’s something in it for you too. Adjacent to the volcano and the lake, you’ll find what looks like human footprints, 400 of them, in fact. The footprints date back 120,000 years  and remain in immaculate condition, thanks to the volcano’s unusual lava ash. The texture allows the footprint to take mold and stay preserved for thousands of years, making it the oldest modern human track in the world. Scientists have studied the footprints and can pinpoint them to a certain individual (such as one with a broken big toe). Visitors will find signs by the footprints to describe their history and findings before continuing to admire the ancient prints of early humankind.

Where To Stay: Several of the designated campsites like Lake Natron Camp and Lake Natron Tented Camp offer amenities and tours where visitors can be taken to the sites of the hominid footprints, go hiking to see waterfalls, see where 1 million flamingos reside, embark on safari rides, and check out the the pink water during its dry season. By nightfall, tourists head back to its cozy private tents outfitted with a luxury bed open air shower, and electrical hook ups. Visitors who wish to get the full immersion of local wildlife and meet local Maasai warriors are recommended to book a room at Maasai Giraffe Eco Lodge, where they can enjoy the free roaming giraffes, zebras and wild birds that have made Lake Natron its permanent solace.

How To See Tanzania On A Budget