Namibia draws astronomers and lovers of stars from around the world due to its vast landscape of salt pans and deserts with very little trees in the way. As night falls, the sky turns glittery like no place else on the planet. Not even your grandmother’s countryside farm has anything on the skies of the Namibian desert, one of Mother Earth’s darkest corners. When planning a trip to go stargazing, try coming during the wintertime when the air is dry and the sky clears up.

The country is recognized for its reddish sand dunes and rocky terrain that will make anyone feel as if they’ve encountered a martian planet or the hometown of Luke Skywalker. Etosha National Park is one of the largest salt pans in the world covering 1,840 square miles of flat horizon and Namib Desert is a whopping 31,200 square miles long. So you can imagine with no nearby cities and only a soft buzzing of electricity from game lodges scattered sparsely in certain locations, the sky’s the limit for stargazing. You’d be hard pressed to find other countries bragging about its lack of “light pollution” and promoting its tourism board as the darkest place on Earth. Environmentalist and professional astronomers living in the country work hard to keep the level of light pollution incredibly low to continue their studies of the stars. 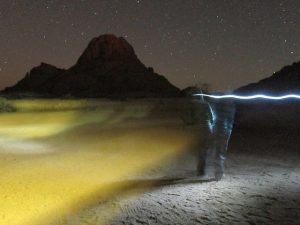 Among the popular destinations to go stargazing in Namibia include Sossusvlei in Namib-Naukluft National Park, approximately a six-hour drive from the country’s largest city, Windhoek. Visitors will find themselves traveling along an unpaved trail in the barren land where specific wildlife like lizards, springboks and ostriches call it their home. Stargazers often camp overnight here from the comforts of their jeeps or high-quality tents. Or see a piece of the galaxy up close and personal near Grootfontein, the home of Hoba Meteorite — the largest of its kind documented on Earth. The metallic rock is believed to have crashed into the planet about 80,000 years ago and has remained in its spot since.

Resorts and game lodges focus around stargazing and people treasure the activity as much as safari rides. Many lodges come with its own observatory deck like andBeyond Sossusvlei Desert Lodge and Hakis Guestfarm. Take advantage of the lodge’s pricey telescopes like “Sky Watcher,” where stargazers can see Jupiter, nebula and spiral galaxies as clear as a picture (your average telescope won’t capture them this well).  Nearly all of the game lodges in the region supply their own state-of-the-art telescopes and stargazing guides who point out the celestial dots overhead and its significance. But even if you didn’t use a telescope, your naked eyes will still do the trick.

17 Namibian Pools We Want To Plunge Into