Le Perle du Sud is just off of Djemaa El Fna — about halfway down Prince street — making it a great place to get a bite after strolling through the Medina. You’ll find it under a green neon sign advertising it from above, but the entrance is only a small door in between two random shops, so be careful not to miss it. After going through the door, you’ll walk up the stairs past a bar, a hamam and a dentist, just in case you needed any of those after dinner. Once inside, the view of the Medina, bustling Prince street and the glowing Minaret are fantastic. 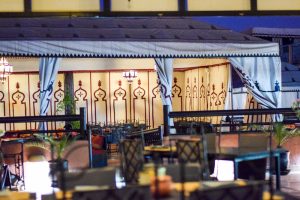 Most people come to this restaurant for the view, and I made reservations to get a seat right by the balcony (where there are about 10 tables). All of them were filled up by the time I got there, so if you want a great outdoor view, it’s best to make a reservation in advance.

The atmosphere on the roof is great, and there is a large open cooking area where chefs grill up kebabs letting the intoxicating aromas waft through the air. A live band plays every night as well, and the trance like music helps to create a mystifying atmosphere as you watch the streets pulsate below.

You could sit by the balcony and people watch for hours, but it’s best to eat here, too. The menu is typically Moroccan, consisting of mostly of traditional meals like kebabs, tagines, couscous dishes and seafood. When we sat down, we were treated to delicious bread coated in rosemary, along with a crushed black pepper tapenade and a variety of fresh olives. The black pepper was pretty intense, but if you like potent flavors with a kick, you’ll probably enjoy it as we did. For mains, we ordered the mixed grill and the vegetable tagine. The mixed grill was cooked to perfection and came with perfectly marinated chicken kebabs, beef kebabs, kefta kebabs, and a small rack of lamb. It also came with some crispy french fries that were served with a gravy I wasn’t familiar with, but reminded me a bit of poutine in its savoriness. The veggie tagine was also cooked well and included the usual combo of potato, zucchini, carrots and couscous, along with onions, red peppers, eggplant and tomato. It isn’t exactly the most exciting dish, but can often hit the spot and play a nice complement to a dish loaded with meat if you’re sharing. The portions for both meals were rather massive, so we didn’t have any room for dessert whatsoever.

As the night lingered on, fewer tourists wandered the streets below and it turned to a strictly local vibe. Our waitress was extremely pleasant throughout our meal 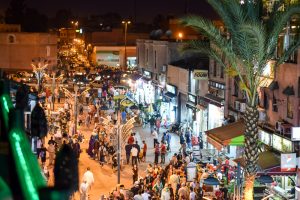 and was able to explain a few unusual items on the menu. I wasn’t a big fan of the green neon light strip along the balcony, and found it a little tacky. It didn’t really go with the vibe of the restaurant or the surrounding area, but other than that, the decor was what you would expect at most authentic Moroccan restaurants.

There are other restaurants around Djemaa El Fna with views of the Medina, but they often come with longer waits, tend to be more touristy, and will set you back a bit more. If you want a place where you can actually get a seat that’s close enough to see the action and has great food, I definitely recommend going to La Perle du Sud.