The foundations are all that remain of the huge cauldrons used until the 1850s at the Miller’s Point whaling station. These days, thankfully, the main industry at Miller’s Point is tourism.

If they’re lucky, diners at the Black Marlin seafood restaurant get to watch whales breaching, porpoising and lobtailing offshore from July to December in one of the most idyllic spots you could imagine for lunch or dinner. 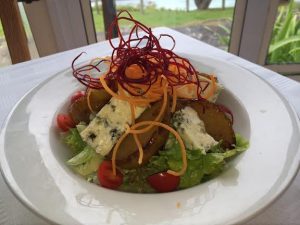 Until the 1850s, whaling was a thriving industry at Millers Point located outside Simon’s Town en route to Cape Point. Now the restaurant parking lot is likely to have a tourist bus or two unloading its cargo at any given time.

Located in a historic building, the restaurant was established in the 1960s and it still has some fixtures from its past like a beautiful old cast iron fireplace and tall ceilings from its days as a dairy farm homestead.

In summer, guests can dine al fresco in the gorgeous restaurant gardens. We chose to sit inside a glass enclosure separate from the main house at a table by the window with a view of the rocks and swaying kelp below. The weather was chilly. A fog burned itself off during the course of our meal to reveal the full coastline. It was mid afternoon and a busload of tourists had just been served seafood dishes that came on skewers.

The waiters will usually warn you to cover your clothes if you order a skewer, according to an online report. The skewers sometimes lend themselves to splattering

I chose the Indaba merlot 2013 because of the wording used to describe it on the Black Marlin menu — “mulberries, damp thatch and smokey.” The restaurant prides itself on having an award winning wine list. When you sip on wine and look out on a coastline that is now a protected space for whales, it’s certainly possible to rationalize that you are helping the planet.

In the face of such a gorgeous view, it was impossible to forget the place’s past as a whale fishery. Small three-legged “potjies” on the table that were used for condiments made me think of the giant cauldrons once used to cook whale blubber. One of the original whale cauldrons can be seen in Jubilee Square in Simon’s Town.

I had a caramelized pear and gorgonzola cheese salad with rocket and blue cheese dressing for 69 rand ($5.95) that was presented beautifully. For my main course I ordered prawns, which came with some unappetizing looking vegetables and french fries that hadn’t quite been cooked through. The prawns were good. House specialties include Cape rock lobster, oysters, mussels and seafood platter. Other favorites include kingklip spit (grilled kingklip wrapped in bacon and served on skewers) and sesame prawns served with peanut satay sauce.

After lunch, I wanted to linger in the garden and explore the property further. It was hard to tear myself away.