Hell’s Kitchen is probably the hippest of the string of hipster bars that line 4th Ave in Melville, Johannesburg’s “bohemian” district. Not that I am an expert in such things, but I have been to a few others here and HK is definitely edgy to the nth degree.

With a motto that reads “food, drink, music, mayhem” and a website that boasts “If John Morrissey and Ronnie Dio came to Melville, this is where they would have a drink,” it should come as no surprise that the denizens of HK are universally young, tattooed, bearded (the men, obviously), purple-haired (the ladies), and pierced (both sexes). 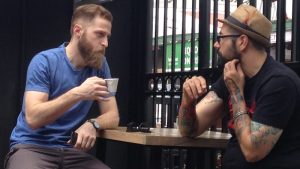 These alt-chic denizens sip whisky, craft beers cocktails and two house favorites — the “hellfire” whisky and cinnamon liqueur, which are both fantastic — while swaying to the music, a throbbing mixture of grunge, rock, metal and goth, with a bit of old-school soul thrown in. The décor is 1920’s speakeasy-glamour-meets-punk-rock, with a checkerboard floor, a bookshelf full of antique volumes, a brick wall accented with neon signs, and vintage leather couches. A hidden doorway leads to a secluded poker room, and the corridor to the bathrooms is plastered with garish album cover art. Meat cleavers are a recurring theme here, and are displayed in various places around the joint.

A tiny kitchen directly faces the bar and is occupied by two young chefs who pump out what looks like tasty pub food: the menu features tacos, burgers, pork belly, pizza and ribs and other meat-centric dishes, which are accompanied by sides such as corn on the cob and onion rings. However the reality of the food was completely different. I was not particularly impressed with any of the items ordered by my group of friends, except the pizza. The burger was overcooked, the pork belly was bland and lacking in any kind of seasoning or marinade, and the onion rings were average. 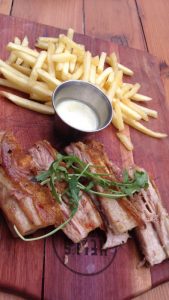 I realize that HK’s main focus is drinks, not food, but considering how highly praised it was by the staff and acquaintances who had eaten there before, I was sorely disappointed. Furthermore, no special requests can be made such as substitutions, gluten-free, or even how well-done you want your meat to be cooked!! And to add insult to injury, the service was extremely slow (over 45 minutes) and some of our group got the wrong items. We did have a lot of people, but we were assured by the staff in advance that they could handle it. This was clearly not the case!

The upshot: go to Hell’s Kitchen for the drinks and atmosphere, not the food.