If you’ve ever seen a photo of Table Mountain, chances are it was shot from Bloubergstrand (translation: blue mountain beach), a suburb along the shores of Table Bay about 25 kilometers from Cape Town city center.

Today, Bloubergstrand’s long white-sand beaches and rocky outcrops are lined with vacation homes, eateries and fine dining establishments. But in 1806, casualties from the Battle of Blauberg washed up on the beach when invading British forces went to war against the defending Dutch.

You can’t shoot a bad photo from On The Rocks, one of the area’s fine dining restaurants. I sipped on The Old Museum, a Franschhoek Cellar merlot, while watching tankers lining up in Table Bay to enter Cape Town harbor. 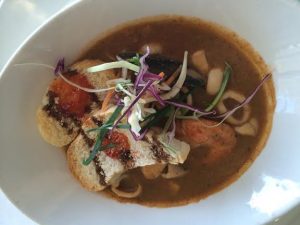 For starters I ordered jalapeno popper salad (R68 or US$5.82) because the menu said it had biltong in it. The jalapenos were deep fried a golden color, stuffed with feta and biltong, and served on a bed of greens. Everything tastes better with biltong. I’m not usually crazy about sweet salad dressings but this one set off the heat of the peppers nicely.

My main course was seafood curry (R150 or US$12.85) and it was a who’s who of South African seafood: mussels, calamari, prawns and linefish (dorado), served with rice and poppadums. It was a little too heavy on the calamari, but good.

The Bloubergstrand area is well known for white mussels, extracted relatively easily from the sand in a process known locally as jiving.

Dessert was visually spectacular. On the Rocks vodka delight was a vodka-infused dessert trio including mini brûlée embellished with caramelized spun sugar; cheesecake; and caramel vodka sorbet (R55 or US$4.71.)

On the wall of the restaurant’s cigar bar, photos documented the history of On The Rocks.

The overall appeal of On The Rocks and its setting was enhanced by its beautiful concrete floor. It had a beach theme, and mirrors placed strategically to expand the views.

You can dine outside on a deck at On The Rocks, but we were happy to be inside — the ideal place for a windy spring afternoon. Area beaches are popular with kite surfers from around the world, who seem unfazed by the cold Atlantic water fed by the Benguela current. Trade winds provide consistent one-to-three-meter surf most of the year in Bloubergstrand.