“Mzungu, mzungu, mzunguuu” chant the school children, as they run towards me with outstretched index fingers. By now, I’ve been in Tanzania long enough to know that they’re referring to the lack of melanin in my skin. As they come closer they feign shyness while observing everything about me – my Panama hat, fluttering purple dress and the camera slung around my neck, but it’s my straight brunette hair that has them most intrigued. By now, older children, who have heard their peers’ gleeful cries, have emerged from classroom windows on the second floor. With more confidence, they smile, wave, ask for my name and to have their pictures taken. 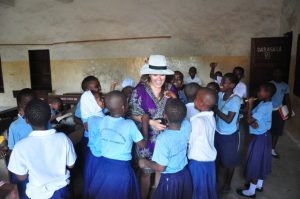 On either side of the windows are two metal signs nailed to the wall – one reads “Mwambo Primary School built by the Germans in 1896. Donated by Sewa Haji. First multiracial school,” while the other indicates the school’s 2006 renovations were undertaken by Marienschule in Ahlen, Germany as part of the Bagamoyo Friendship Society.

Mwambo Primary School is the last stop on my day-long walking tour of Bagamoyo with guide Chris Mahona. As the school day, and our tour, finishes, Chris asks the principal if I may spend time with the children. After the exhilaration of a visiting mzungu fades – and once they’ve all touched my hair – they tell me about their English teacher and language lessons, try to guess my age, take turns doing a maths sum to try figure out our age difference, but more importantly tell me about life in Bagamoyo.

Indeed, Tanzania’s first and former capital is a open-air, living museum. Despite efforts, it wasn’t classified as a UNESCO World Heritage Site, but many of its artefacts are significant to the region’s timeline and date back to the 13th century, when the northeasterly tradewinds beached Arab traders on its shores in their dhows. They were soon followed by the Indians, centuries later by the Germans (in the mid-1800s), and finally by the English. 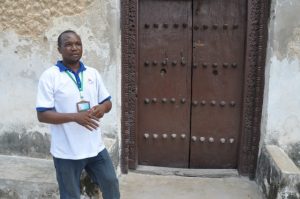 Chris narrates theses tales back to life. Three miles south of Bagamoyo lie the crumbling 13th-century Kaole ruins with their 31 Arab graves with engraved pillars, two mosques, the well that never runs dry and a lovers’ tomb, which is visited by couples each Valentine’s Day.

The story goes that a married Muslim couple were en route to Zanzibar for their honeymoon, when their dhow was smashed in a storm. They tried to swim back to the mainland, and when the wife grew tired her husband tied her to himself with his clothes. She tragically died anyway, and even after she passed away, he didn’t untie her. He eventually died as well, and they both washed up on the beach the following day. As in life, so in death they were inseparable and so they were allowed to be buried together in an adjoining tomb.

While we’re here, we visit the museum and the 1,500-year-old baobab. Folklore has it that if you walk around it clockwise, you’ll add a year to your life, while walking anti-clockwise will rob you of time. “Don’t be too greedy,” Chris warns me after my first revolution. 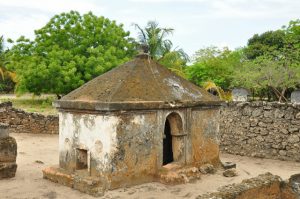 With time Bagamoyo became East Africa’s most important trading port. In Bagamoyo’s Stonetown, free men from the surrounding Great Lakes region lost their sovereignty as they were loaded on ships like commodities – alongside ivory, salt and copra from the surrounding coconut plantations – headed to Zanzibar, just 30 miles away. Tanzania’s main slavery hub was situated in Kilwa Kisiwani – 205 miles south of Dar es Salaam – and while slavery was prohibited from the early 1870s, it continued for at least another two decades. Still there are presumptions that Bagamoyo’s name (Bwaga-Moyo), which means “lay down your Heart” in Swahili, may be a reference to this slave trade.

After the shallow bay got overgrown with mangrove and swamp plants, the capital city was moved to Dar es Salaam. Yet, it’s here that so many of the country’s stories intertwine. The single-story fort was occupied by the Sultan of Zanzibar in the late 1800s, then the Germans made it their military camp during World War I and added a second story, before an air attack and naval bombings left it in the hands of the British in 1916.

Chris runs his fingers along the carvings of the fort’s wooden double door, as he explains the significance of the intricate details. In Tanzania – as in other parts of the world, such as India and Arabic states where door carving is prominent – doors chronicle the owners’ profession, social standing in the community and wealth. 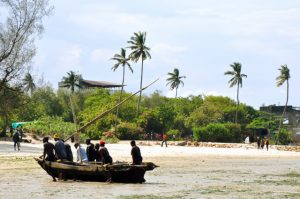 Karibu, the Swahili word for ‘welcome’ which is Tanzania’s mantra, is represented by a pineapple, which may be surrounded by carvings of other fruits, flowers, rope and other geometric shapes and symbols. Interlinked chain-like carvings indicate that the head of the house was a slave master, while brass knobs and bronze, spike-like embellishments were initially used for practical and now decorative purposes.

From the empty standing Boma – which was the head quarters of the Germans in Eastern Africa – you can see dhows and fishing boats rocking on the shallow waves, as fishermen bring in their daily catch to sell at an informal auction on the beachfront. Samaki Samaki – fish wrapped in tin foil and drenched in lemon, spices, vinegar and salt – is being prepared over an open fire in the corner of the market. So goes the ebb and flow of Bagamoyo, as it always has.

East Africa’s largest port is set to open in Bagamoyo in 2017, which will undoubtedly change the face of this historic centre and bring with it new stories.

Bagamoyo walking tour: US$50 per person (costs decrease with the number of people in your group)

Other tours in Bagamoyo with Chris Mahona: