South Africans love to eat meat, and aren’t picky about what form it comes in, whether it be beef, pork, lamb, springbok, prawns, chicken or seafood — in fact, the joke about Jozi is that there’s a meat lovers’ restaurant on every corner. So the next time you’re out with your non-vegetarian friends and start craving something meaty, try one (or more) of these 11 Johannesburg restaurants that put meat lovers first. It was hard to narrow it down to just 11, so we limited this list to the finer establishments in town — but don’t be afraid to pop into the nearest joint should you not find yourself near any of these favorites!

On your way to or from Magaliesburg, stop by this fun African-themed restaurant in Muldersdrift, where meat in all forms is the main attraction. Zebra, impala, crocodile, ostrich, and more “conventional” domestic meats are skewered on Maasai swords and charcoal-grilled over a circular fire located in the centre of restaurant. Carnivore is a franchise of the famous, kitschy restaurant of the same name in Nairobi.

Courtesy of The Butcher Shop

With a motto of “we raise the steaks,” having a steak is non-optional when dining here, and there are oh-so-many varieties and ways you can order them. There’s Argentinean ribeye, Dutch veal, Australian Kobe-style wagu, plus South African T-bone, rump and sirloin, among others. All meat is aged three days on the carcass, then put in cold storage for another 21-40 days before being served to your plate, or sold in the accompanying meat shop. Of course there are hundreds of other tasty options, such as lamb curry, pork spare ribs, chicken kebabs, ostrich fillet, Scottish salmon, and langoustines. The congenial atmosphere on Mandela Square adds to The Butcher Shop’s appeal. 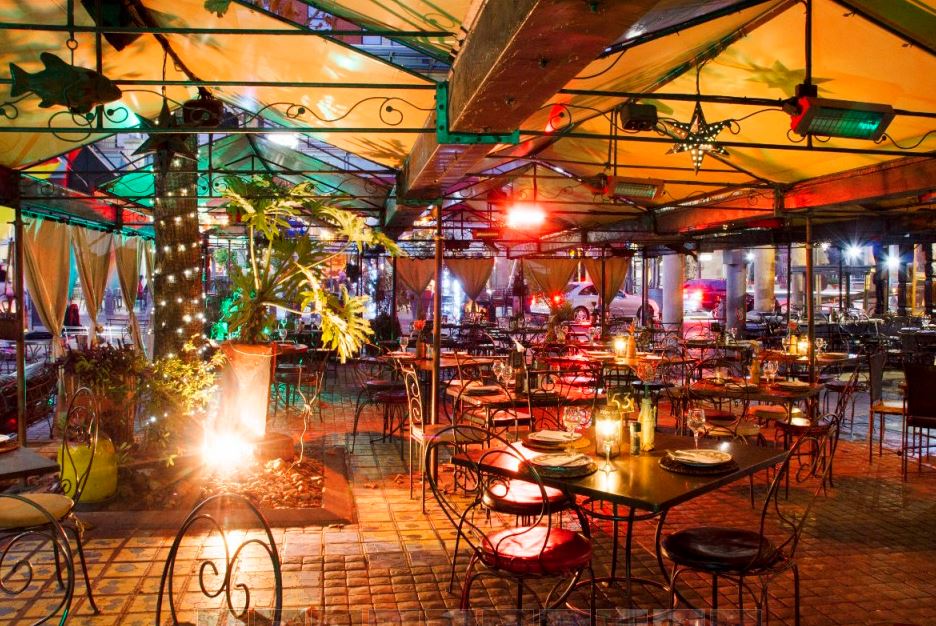 Both branches of this popular (but touristy) eatery are paradise for meat lovers. The pan-African menu offers a sampler of major dishes from every corner of the continent, such as Senegalese chicken tassa, South African springbok carpaccio, and Ethiopian ostrich berberre. But you don’t go to Moyo just for the food. You go for the sights, sounds, and feel of the place. The interior of the restaurant looks like a museum crossed with a nightclub: pressed pebble walls, copper furniture, textured wood paneling, and African art and artifacts crammed onto walls, shelves, and ceilings. Locations are in Zoo Lake and Melrose Arch.

The ever-changing menu at The Local Grill includes a rotation of sirloin, fillet, rump, and wing rib steaks, made from Chalmar or Greenfields grain-fed, free-range beef that is either dry or wet aged. Pair that with Namibian oysters, beef pie and pap and meatballs, and you’ve got a winning combination. Located in Parktown North, the interior comprises clean and simple lines, bovine artworks, wooden floors and a blackboard displaying the days aged. You can even take beef courses, or tour the kitchen and meat locker. 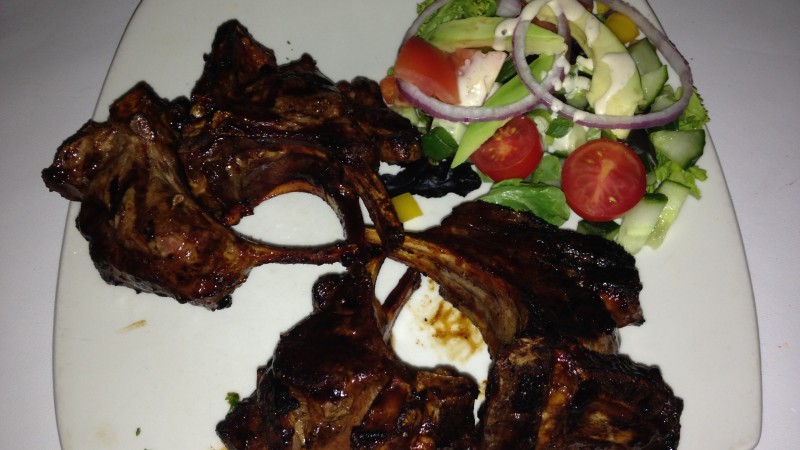 The Grillhouse, which has two locations in Joburg, is all about shameless, meaty indulgence. The darkly elegant interior is modeled after classic American steakhouses of bygone days, and waiters are smartly clad in black ties and suits. Steaks are served in increments of 200, 300 or 500 grams and cuts include filet, rump, New York sirloin, T-bone, and ribeye. You can choose basted or spiced, and you have the choice of 10 sauces, ranging from chasseur to cheese to peri-peri. There’s also lamb, ostrich, venison, and chicken and loads of seafood, with calamari, kingklip, king prawns and langoustines among the offerings. Branches are in Rosebank (the Firs) and Sandton (Athol Square). 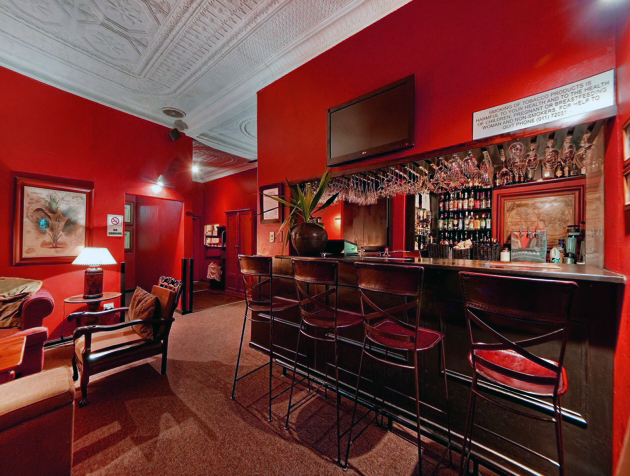 Regularly listed among Joburg’s top restaurants, Wombles offers juicy prime cuts of Zimbabwean and South African beef with a variety of sauces, served amid colonial-style, hunting lodge-themed décor. If you’re really hungry, try tackling the 1kg “Man Size Rump,” or the fillet on the bone, a perennial favorite. But this isn’t a classic steakhouse, and there are lots of other offerings served with creative combinations of sauces, sides and savoir faire. Try the springbok shanks, the steak tartare, the duck, the salmon, the quail, or the venison, all plated with immaculate attention to detail and served by incredibly attentive wait staff.

Steak is the flagship item here, and you can get dozens of different cuts, sizes, and types of meat, including beef, lamb, pork, venison, and ostrich. Aside from steak, other meat choices include classics such as chicken cordon bleu, prawn and chicken curry, and peri-peri chicken livers. Meat is also sprinkled liberally throughout other dishes, such as the superb biltong and avocado salad, the delectable garlic snails, and the tender springbok carpaccio appetizer. Bull Run’s location opposite the Johannesburg Stock Exchange is reflected in the clever spreadsheet-style menu that groups items into “Commodities,” “Futures,” “Organics,” etc., and lists all prices in rand, dollars, euros, and pounds sterling. 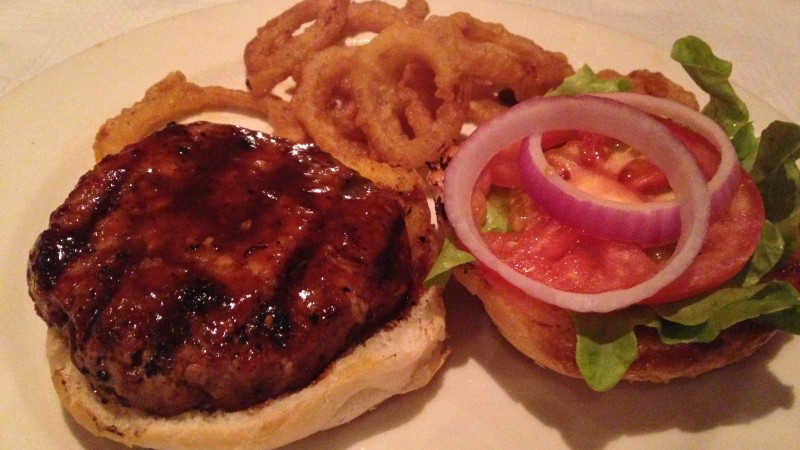 You know you’re in a true steakhouse when the knives that come with the place settings look like something out of a Rambo movie. All the better to tackle the various cuts of wet aged beef, such as rump, sirloin and ribeye, in various sizes and with a choice of six or seven sauces. Then there are the grill selections, such as free-range baby chicken, calamari, Atlantic salmon, ribs, and ostrich. There’s an eclectic range of starters such as chicken livers, mussels, and duck spring rolls. Located in Hurlingham, Chaplin’s is a great place for large groups to celebrate a special occasion – -the premises are large, and the wine list extensive.

This Northcliff meat lovers’ haven has been around for more than 47 years, so they must be doing something right. An old stalwart on the Joburg dining scene, you don’t come here for the latest trendy dish or avant-garde decor. You come for the classic mains and sides, and the jovial ambiance. If your stomach can handle it, try the kilogram of pork ribs with Portuguese or barbecue basting, or the sirloin rubbed with mustard seeds, rosemary and coarse salt. Various chicken dishes (like spinach Cordon Bleu), seafood plates, burgers (known as “guns” here), and tasty sides (known as “ammo) like chips, baked potato, and onion rings round out the menu. There’s a carvery from Monday to Friday, which is fun if you’re with a large group. 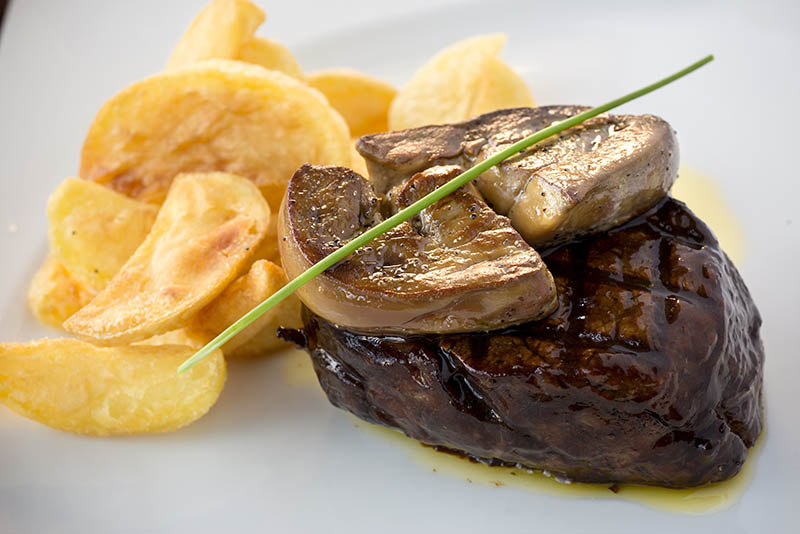 Courtesy of The Meat Co

Diners flock to this Melrose Arch establishment (there’s also a smaller branch in Montecasino) for the French-inspired fare, including “designer dishes” such as Mediterranean crusted rump, the sirloin with sauteed mushrooms, rocket, red onion and Bearnaise sauce, grill rump escargot, and filet mignon. Other house specialties include flamed-grilled lamb cutlets, Portuguese trinchado, rack of spare ribs, hake fillet, and bespoke burgers. But the salads and appetizers rate a mention as well, especially the gourmet boerewors, the beef carpaccio and the chicken Caesar. We could go on, but we’re getting hungry. The elegant, airy interior features semi-private dining alcoves and a sweeping staircase with over 3000 bottles of wine.

Recently reopened after a year-long renovation, this Joburg institution is a decent place to grab a bite if you’re in Mandela Square and find yourself having uncontrollable carnivorous cravings. As its name implies, Trump’s Grill is a place to go if you really, really love meat in all its forms. Starting with burgers and chicken wings and going all the way up the price scale to top sirloin steak, the restaurant also offers regional and local meats such as ostrich fillet and game carpaccio, and seasonings such as peri peri and curry. But steak is the reason most come here: signature dishes include the melted cheddar steak and the pepper sauce rump steak, which are made from wet-aged Karan grain-fed beef that is aged on the premises for 21-28 days. Trump’s is easier on the budget than some of the other establishments on this list, but the quality is roughly the same.