On the 1st of March 2015 a small veld fire began on the mountain side in Muizenberg, Cape Town, just above Boyes Drive. Within a matter of hours it had spread over 3000 hectares, completely engulfing the entire mountain landscape through to Noordhoek, Silvermine and Hout Bay, with no end in sight. Luckily there were almost no residential properties in the fire’s midst, but there were some… 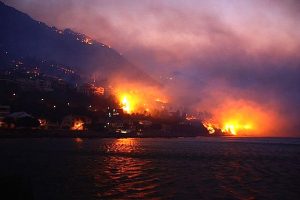 Tintswalo Atlantic, the luxury, five-star boutique hotel, is located on a beautiful and secluded, private beach that can be found down a winding road surrounded by nothing but flora and fynbos, just below Chapman’s Drive in Hout Bay. With nothing but the wonders of nature to protect it, the lodge was directly in the line of fire.

An emergency was called and the hotel was evacuated in the early hours of March 2nd, leaving no time to remove any of the millions of rands worth of décor and furnishings. The Tintswalo team returned later that morning to find to their delight that, whilst everything around the hotel had been destroyed, the hotel itself had not been damaged. But, within minutes of their arrival and without warning, the wind changed direction and one of the suites immediately burst into flames.

Gaye Corbett and Lisa Goosen (owners of Tintswalo Lodges) relayed the trauma of the devastation that followed. “On returning we could see that the front three suites were untouched and it looked like the reception area was still standing, but the main lodge, with those beautiful milkwood trees, was completely burnt. In fact there was nothing left of the building, just charred ash and the chimney. So by about 12 o’clock, the numb feeling had returned and we were back to the realization that Tintswalo Atlantic was actually gone. We were facing a complete rebuild.” 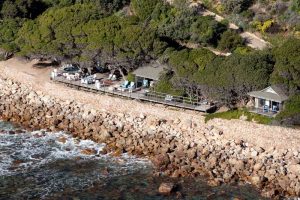 Tintswalo, before the fire

65% of the hotel was destroyed including five of the 12 suites and the entire main building. “We lost so much; all the memorabilia and beautiful custom-made items we’d collected over the years. It was traumatic to say the least.”

Despite their heartbreak and misfortune, they wasted no time in moving forward, and as soon as the assessors had given them the go-ahead, the rebuild began. Gaye and Ernest Corbett immediately announced that the new Tintswalo Atlantic would re-open on the 1st of November 2015, giving them just seven months from start to finish, a feat that no one deemed possible.

“Once the trauma was over, it was the start of a new lodge… a rebirth, and getting into the creation of a new, spectacular space became exciting,” Corbett and Goosen said. “It was a wonderful challenge to create something even better than the first time around.” Tintswalo Atlantic was renowned for its elaborate furnishings and eclectic décor, so they decided to keep the look and feel similar to that of the previous incarnation of the hotel. But, they also saw an opportunity to make the hotel even more luxurious. “We are so fortunate to be surrounded by the most naturally beautiful environment and it is important to us that our guests are intrigued, entertained and captivated by our eclectic interiors too.” 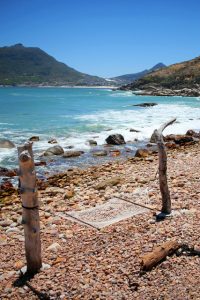 With many of their beloved 300-year-old milkwoods now destroyed, they needed to make some different architectural choices as the previous lodge had been designed around them. “The décor has altered somewhat, seeing as there are no trees on the deck, so we are now using delicate shading and blinds. We were introduced to artists, Craig and Grant, from Forrest Creations, who were able to salvage substantial pieces of wood from the dead milkwoods. The soul of the trees will continue to bring great energy into the new hotel. Platters, stools, side tables and even our new bar counter have been made using the wood from these iconic trees.”

Gaye’s most prized silver table was also saved in a gallant gesture by general manager Melissa du Rand who, on exiting the burning lodge, threw the glass top to the ground and, with the help of others, was able to move it into the driveway and out of harm’s way. This is now the focal point at the entrance to the lodge, alongside an array of melted silver frames from the fire. They even managed to save silver knives and forks from the wreckage and have had them re-silvered.

Each piece of sumptuous furniture, every fragment of fabric, every picture, chandelier, silver tray and glass have been hand-picked by Gaye, Lisa and their team to create the perfect atmosphere, exuding luxury and tranquility. Each suite is dedicated to an exotic island, and every feature, down to the wood and even the fabrics, is either sourced directly from the islands themselves or designed to exactly emulate them. 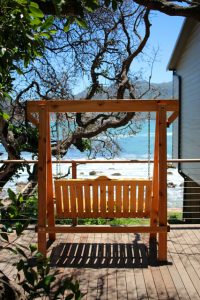 Their use of distinctive doors at the entrance to each suite was a signature feature of the previous hotel and something they believed vital to the rebuild. “Our doors have always contributed hugely to the personality of the hotel thanks to their individual and incredible craftsmanship,” the ladies said. “The new doors are all imported from exotic places like Zanzibar and India, and have undergone extensive restoration work.” ‘Uniqueness’ is certainly a strong theme here, with no two items of furniture being the same from suite to suite; even the coffee machines and fireplaces have been individually colour-coded to match each room. Their dedication to detail goes above and beyond, with Gaye personally decorating each bathroom with an array of shell mosaics inspired by the room’s colour palette and theme.

Tintswalo Atlantic really is one of the most magnificent hotels I have had the privilege of visiting.

Aside from the stunning design and exceptional attention to detail, its magnificence stems from the fact that the entire hotel is situated on the water’s edge, literally a stone’s throw from the Atlantic Ocean as the hotel is built on top of a pebbled beach. Each of the suites has glass doors that open out onto a private deck where you can revel in waves gently breaking against the shore; the entirety of Hout bay on the horizon and the endless ocean in your midst…You could stare at the view for days and never tire from it. 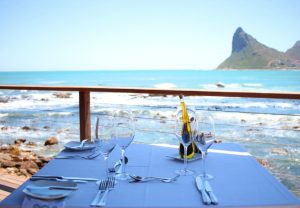 Tintswalo Atlantic has all the makings of the best, luxury, five-star hotels in Africa: the service, the design, the sheer extravagance of it all…but what really sets it apart is the scenery. You really do feel as though you’re on your own island, a secluded place where interruptions are simply an impossibility. All this, with the convenience of being just 25 minutes away from Cape Town’s city centre.

At every turn there is a bench, a stool or a chair perfectly positioned so that you can sit down and marvel at the view once more. They really want you stop and smell the roses here, or in this case, the ocean breeze and the milkwoods. My favourite of these spots was a lone hammock set on the pebbled beach below the pool deck, offering uninterrupted views and serenity — a small glimpse of what heaven must feel like.

They have done the impossible: in just seven months they have taken a catastrophe and transformed it into a masterpiece, one that has somehow superseded the splendour of what was before. For in Gaye’s words, “The eyes of the world were on us after the fire and when guests walk through the door now, the looks on their faces tell us that we have produced something that lives up to what we set out to achieve – a place of peace and beauty.”