Africa is brimming with UNESCO World Heritage sites, and South Africa can claim a whopping eight of them by itself. While all of them have a good reason for being on the list, one of the most impressive is the Vredefort Dome. 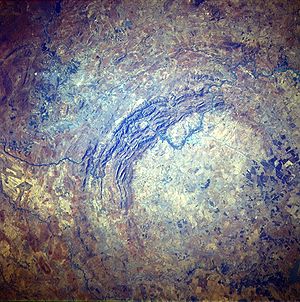 The dome is inside the largest impact crater on the face of the earth and was originally 300km (190 miles) across when it was formed, though much of this has been eroded away over millions of years. The asteroid that hit the area is also one of the largest to ever hit the earth and struck the area an estimated two billion years ago. When it hit, it released the most energy ever seen on Earth, far stronger than an atomic bomb, and enough to have global effects including evolutionary changes. However, to actually see the whole crater, you’ll need to be looking at an image from space, as all you’ll see from the ground are hills.

It was added to the UNESCO World Heritage sites list in 2005 due to it being a geologic wonder. If you’re wondering why it took so long for such an impressive world site to be named to the list, it’s because people used to believe that the dome in the center of the crater came from a volcanic explosion. It wasn’t until the 1990s that evidence proved it was actually from a large asteroid impact.

What remains on the ground is a large ring of hills around the crater which is great for hiking, exploring, and simply to say, I’ve been at the largest asteroid impact crater on the planet.

Why You Should Go:

There are many fascinating hikes in the area with incredible views, and there’s something about knowing your walking in a deep impact crater that makes the experience more memorable. There are also several interesting towns in the area, including Vredefort itself and the lovely town of Parys, which is home to several antique shops, bohemian cafes and trendy clothing stores. Parys is also where you should grab lunch and dinner, as most of the best food in the area is here. 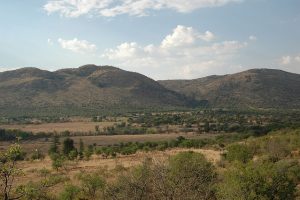 One of the most beautiful trails in the area is the Rooihaas hiking trail, which takes about two days to hike and covers over 20km. The hike starts at Venterskroon then goes to Boplaas, where there are overnight facilities along with a place to braai. During the hike, you’ll pass by streams, indigenous Riverine forests, old farmhouses, and areas where gold miners staked their claims.

Another fantastic spot to hike is down the Vredefort Meteorite Trail, which can range from a one day to a four day hike. The trail has four different legs, each over eight km long and quite steep in sections. The higher sections of the trail near Twane have the best vantage points of the impact crater.

To gain some more local knowledge on the area, be sure to stop at the Vredefort Dome Information Centre in Venterskroon, where you can watch a 12-minute video about the impact along with learning some geological information and history about the area. There are several trails in this area as well, including one that goes through a historical village and another one that follows an old ox wagon trail.

If you’re not up for hiking or deepening your knowledge, many people enjoy kayaking and fishing in the area, especially down the Vaal River. For more information on activities in the area, visit the Dome Adventures, Foot Print Hiking Club or R.E.A.L. Adventures websites.

How to get there and where to stay:

The Vredefort Crater is located around 140km from Johannesburg in Free State Province and is easily accessible via the N1 highway towards Cape Town. Just turn off onto the R59 towards Parys and you’ll be driving over the rim of the crater area. It’s easy to self drive around the area and create your own itinerary. To set up a tour in the area, visit the Vredefort Dome Information Centre.

There are several hotels and overnight camps to stay in the area, including the Riverside Sun Resort on the Vaal River in Vanderbijlpark, Le Grand Chateau in Parys, and the secluded Thwane Bush Camp, which is located in the hills of the crater.