Being the fastest land animal, one that likes to nap during the day, and one that weighs less than other big cats, cheetahs can often be pretty hard to spot. It doesn’t help that they are also endangered and only number around 8,000 in the wild. But the elusiveness of this big cat is part of the thrill of seeing it. Whether your safari takes you to Kenya or Namibia, there are many places where you can see this magnificent animal with a little patience and luck. Here are the best places to see cheetahs in Africa. 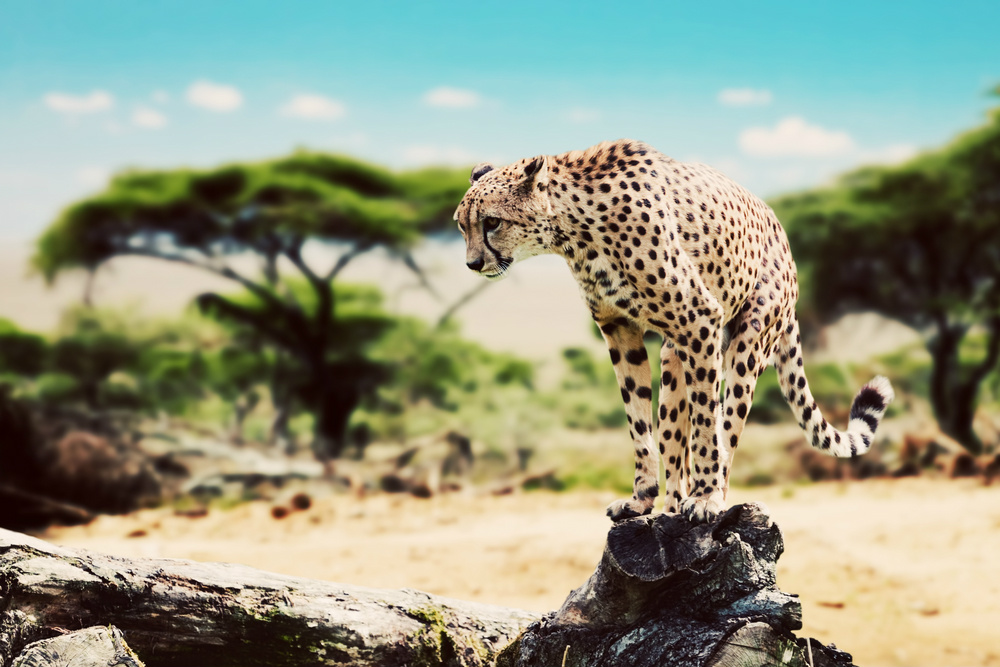 Kenya’s Masai Mara is without a doubt one of the best places to spot cheetahs in Africa. It’s also a place where the curious animal has been known to jump on top of safari vehicles. The park is home to the Mara Cheetah Project, which regularly tracks the movements of local cheetahs. The annual wildebeest migration is the best time to go in order to see cheetahs stalking the large amounts of prey that come through the area. 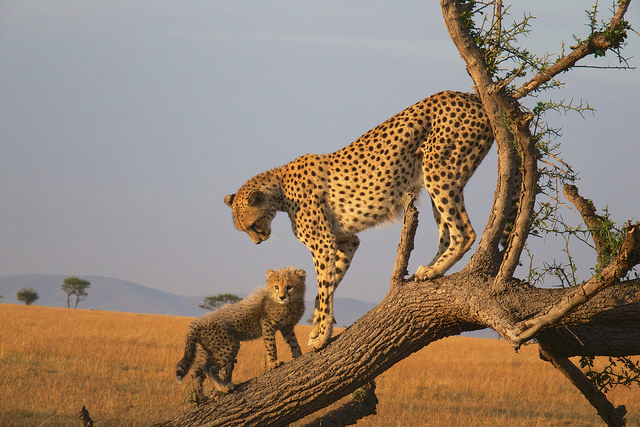 Adjacent to Kenya’s Maasai Mara, Tanzania’s Serengeti National Park is an equally great place to spot cheetahs. During the migration, cheetahs prowl the area.looking for a meal amongst the thousands of animals who trek through the park. The terrain in the Serengeti is ideal for spotting cheetahs due to the sparse savanna grass and open plains. The Ndutu Safari Lodge claims it is one of the best places in the Serengeti to spot them, and guests regularly record sightings there. The best time to go is around February and March, when the grass is short. 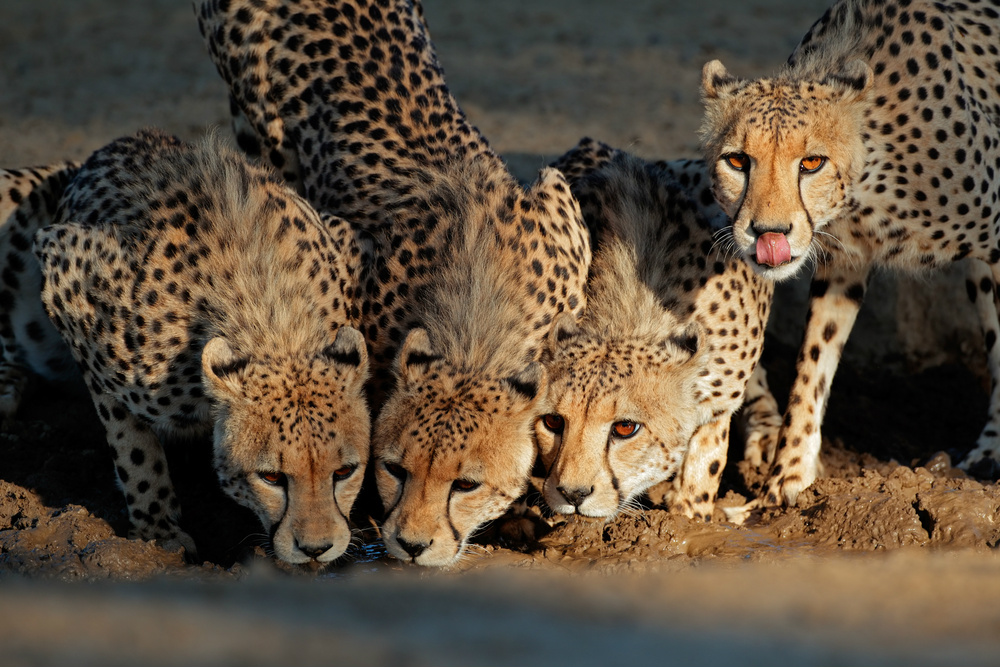 The Kgalagadi Transfrontier Park on the border between South Africa and Botswana just might be the absolute best place to spot cheetahs in Africa, mainly due to the park’s high cheetah population and ideal terrain. The best time to go is when the springboks are having babies. Cheetahs love to have them as a tasty snack. 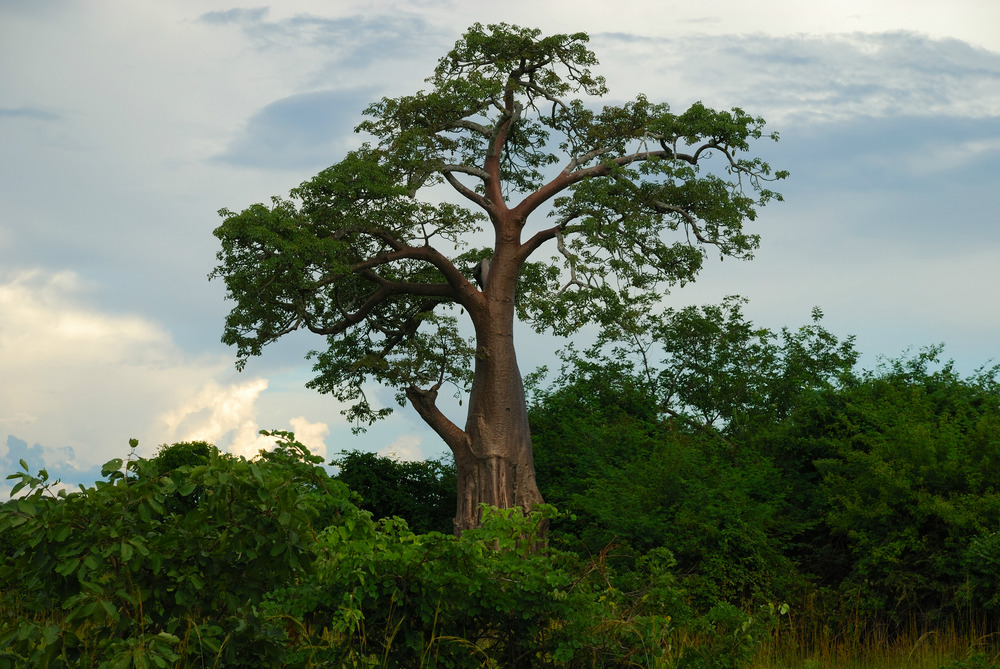 As the oldest and largest park in Zambia, you can bet there is going to be a lot of wildlife to spot here, including cheetahs. The area is mostly flat with a few granite hills dotting the landscape, making scanning the area with your binoculars fairly easy. There is a high concentration of wildlife in the floodplains, and cheetahs regularly come into the area to chase them down.

A lone cheetah in the Kalahari (Shutterstock)

Being rather remote and also the second largest game reserve in the world, the central Kalahari is easily one of the best places to see cheetahs in Africa. Most of the reserve is flat, making it easy to spot cheetahs in their natural habitat. The park is only accessible by 4×4, and it’s best that you have a bit of safari experience and come with all the gear you need. 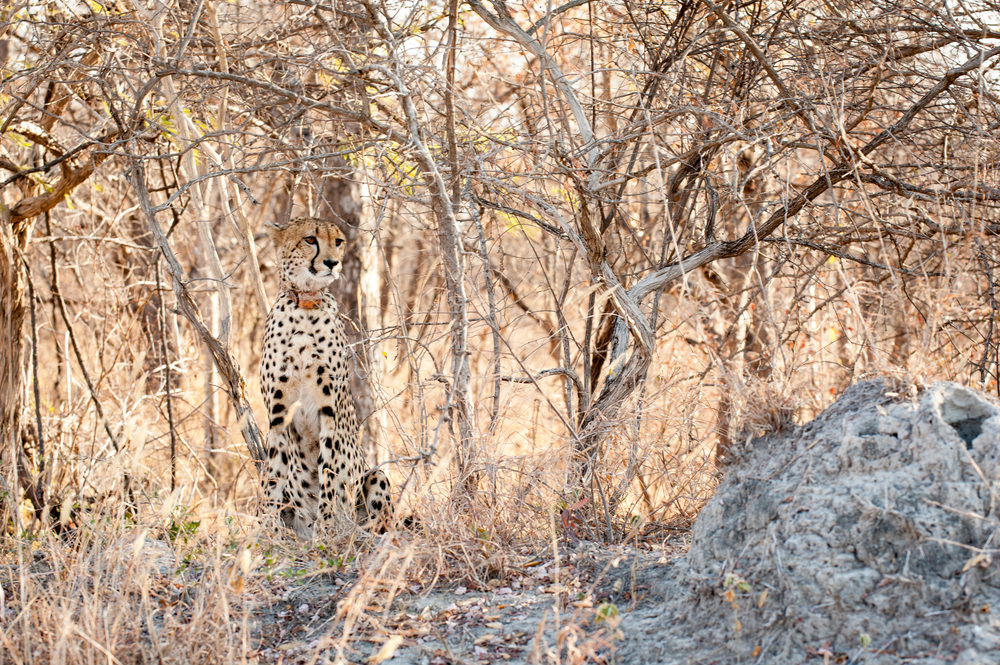 A cheetah hiding in the bush in Kruger (Shutterstock)

As you probably know, Kruger Park has a robust population of all kinds of wildlife, not just the big cats. While the cheetah is the least common cat in the park, the current population is around 200, making your chances of seeing them decent. The private reserves around the park are also top notch for sightings, particularly the Sabi Sand private reserve. If you can’t make it to Kruger because of budgetary or time restraints, make a trip to Pilanesberg National Park instead, where you also have a good shot of seeing them. 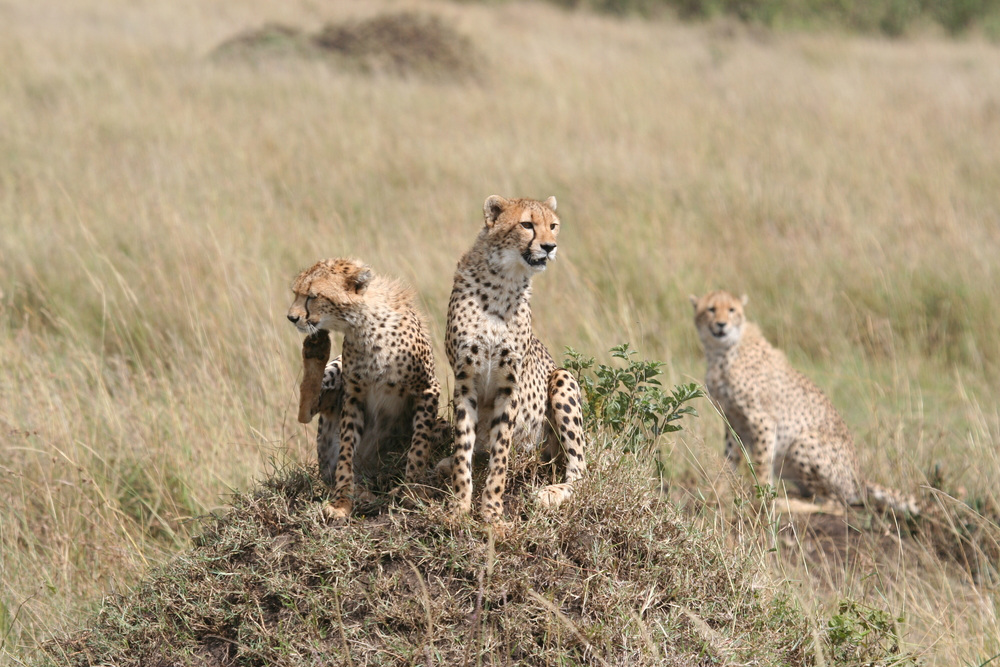 Cheetahs on a mound in Botswana (Shutterstock)

There are many large reserves in this area including Kwando, Linyanti, and Selinda, all with high concentrations of wildlife. Head to the open plains in these reserves with a good guide and you’ll have a fantastic chance of spotting cheetahs chasing prey. Linyanti is just west of Chobe National Park, making it pretty easy to double up on multiple game drives. 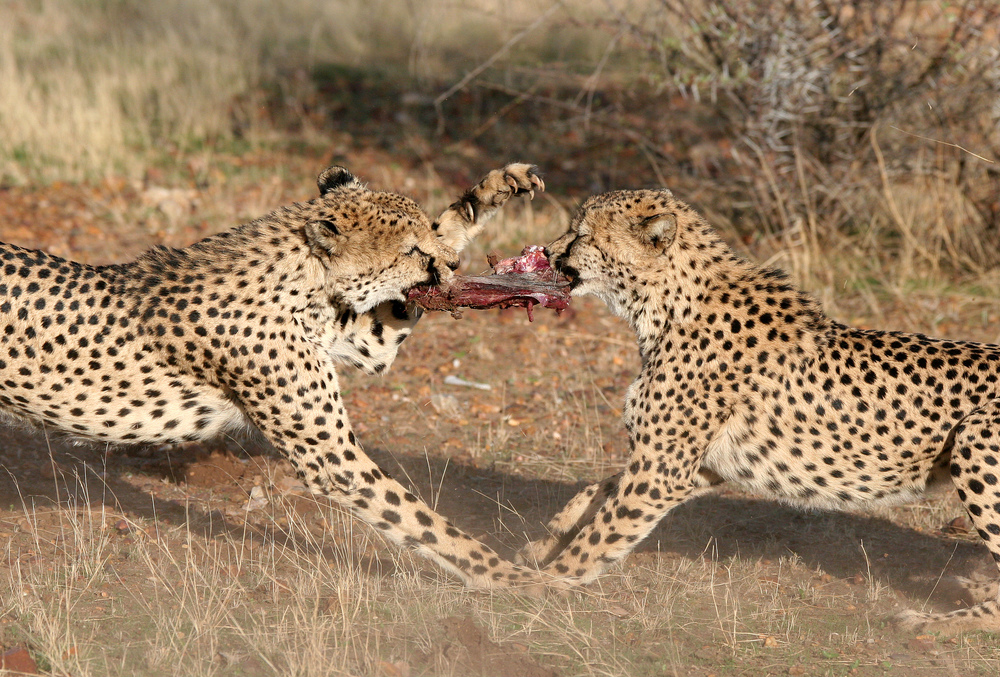 Namibia has the largest population of cheetahs in Africa, and while many of them roam farmland throughout the country, there are still plenty you can see within the confines of Etosha National Park. As the park is quite dry, be sure to look for them near water holes — game tends to congregate there, and cheetahs follow the game. Outside of that, stick to the vast plains and keep your binoculars handy. 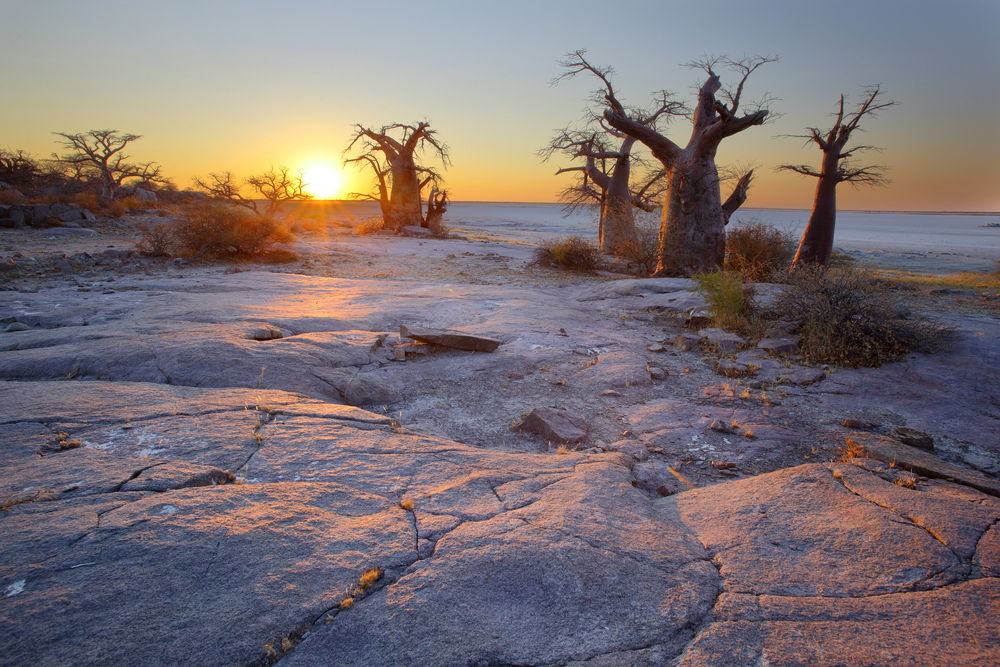 The salt pans and dry savanna of northeastern Botswana make it a cinch to spot cheetahs. Much of the area is pretty desolate and there isn’t much water, but that won’t stop cheetahs from capturing prey. The pans are surrounded by the Kalahari desert, and cheetah travel between both areas all the time. The park covers an area of 12,000 square kilometers, so there is plenty to explore if you have the time. 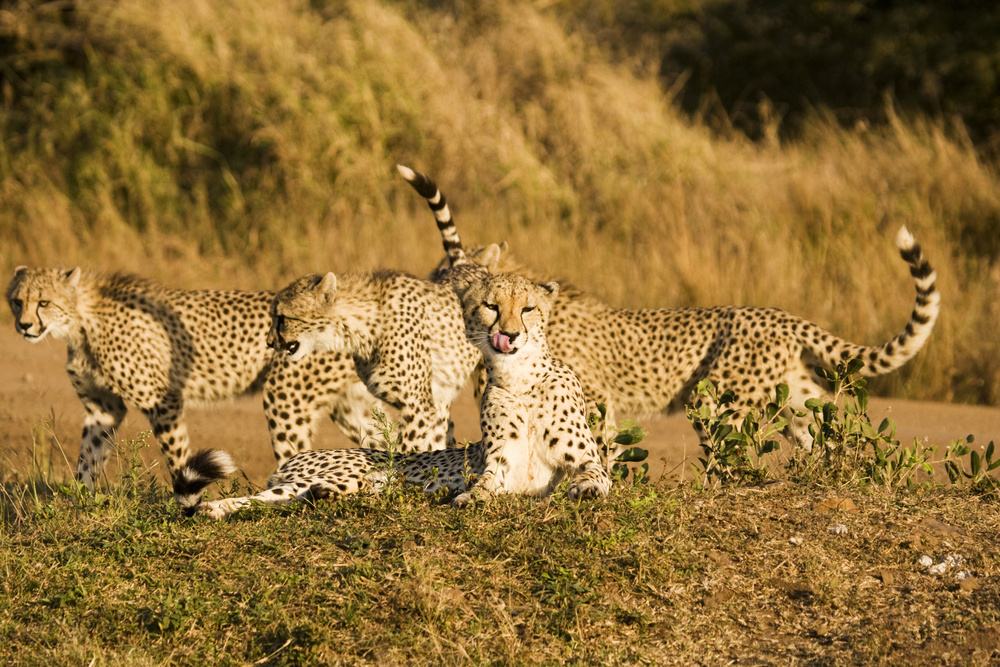 Other private reserves in South Africa

There are many private reserves in South Africa which have re-introduced cheetahs. Most of these park can be found in KwaZulu-Natal province and the Karoo of the Eastern Cape, and include the densely populated Phinda Game Reserve. Cheetah populations are growing here, and sightings are fairly consistent. If you can’t make it to any of the above, there are also several cheetah sanctuaries throughout southern Africa — just make sure they adhere to ethical practices before you visit.

10 Things You Didn’t Know About Cheetahs

This article was originally published September 4, 2015.