When visiting southeastern Asia, most people will think of exploring Vietnam or Thailand, leaving Laos overlooked. But that trend is changing as more people are increasingly becoming aware of the beauty and perks that the lesser-known country has to offer. Here are 15 things to do in Laos, a country steeped in tradition and covered in natural beauty. 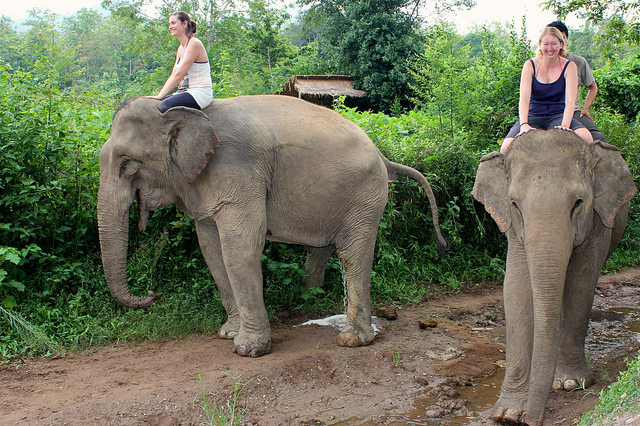 Head over to the Elephant Village in Luang Prabang where you will find scores of rehabilitated elephants. Most of the animals at this center were rescued from being overworked and abused by previous owners. At the village, tourists can mingle, feed, pet, and even go for a ride on some of the friendlier ones. 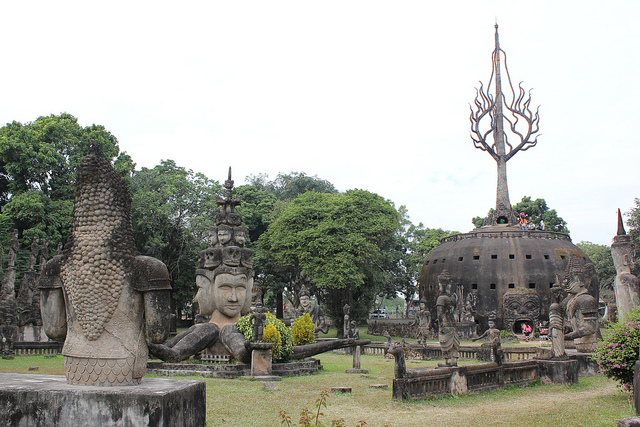 Alice in Laotian Wonderland on acid is the best way to describe this surreal park adorned with strange statues. With over 200 Buddhist and Hindu sculptures (some with animalistic gods), it’s a unique experience to be surrounded by these stone creatures. So get yourself lost in the midst of this strange park, and maybe you’ll come out as a new person with a new religion. 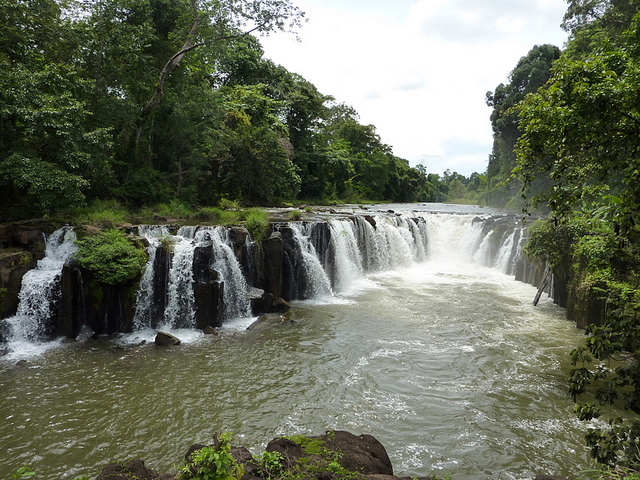 This plateau is home to collective waterfalls that resemble something you would see in a Kodak commercial (if you can remember those). While this is a beautiful sight, visitors can not only admire the scenery but also explore the neighboring coffee plantations and smaller towns, too. 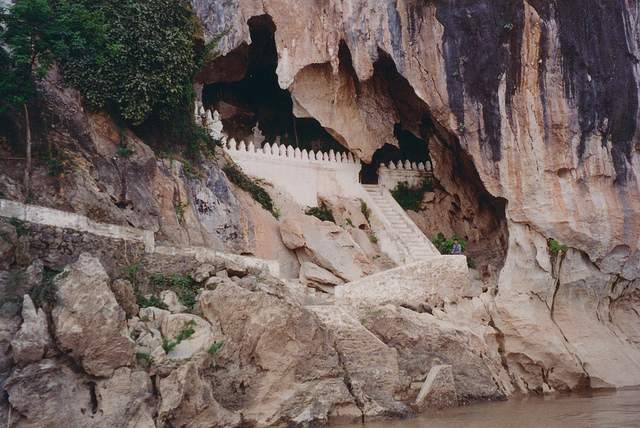 Laos is known for hosting two magnificent historical caves loaded with Buddhist figures and shrines. It’s best for tourists to go by boat down the Mekong river to this destination before climbing inside this carved cavern. But no worries, there are no Hindu bats inside, we promise.

This incredible ancient 5th century temple is still standing after many centuries (although its partly damaged). Word has it that the shrine was dedicated to Lord Shiva who represented the ocean — it’s still used as a place of worship for monks. When walking up close to the temple, tourists can see detailed artworks of Vishnu, Krishna, crocodiles and other Hindu-related subjects. 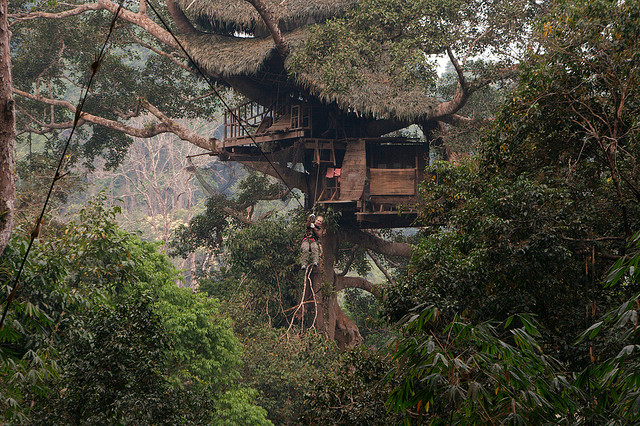 Deep into the jungle of Laos, a tree top hotel allows visitors to book their stay overnight in the trees. But if you rather keep it a day’s visit and not fend off mosquitoes, you can still participate in the hotel’s popular zip lining activity. You’ll be left feeling like Tarzan after he conquered the jungle.

This popular tourist town is recognized for its incredible landscapes and a lazy river perfect for tubing. Hit up one of the tube rentals places and kick back peacefully while enjoying the majestic views.

This 3rd century stupa is covered in gold. Inside, not only will visitors find gold-plated ceilings and walls, but will also stumble upon ancient artifacts including statues of kings and dragons. Be sure to plan ahead since the temple is only open during odd hours at certain times of the year.

Alternatively called 4,000 Islands, Si Phan Don is characterized by a collective of small islands where strong river currents rush forcefully between the lands. Visitors can explore some of the islands by foot and may even spot some freshwater dolphins swimming nearby. 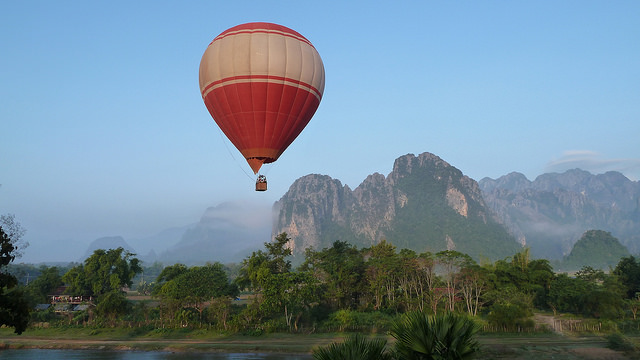 If you want to grasp the full gist of Vang Vieng’s gorgeous rocky range, embark on an affordable hot air balloon trip across the area. 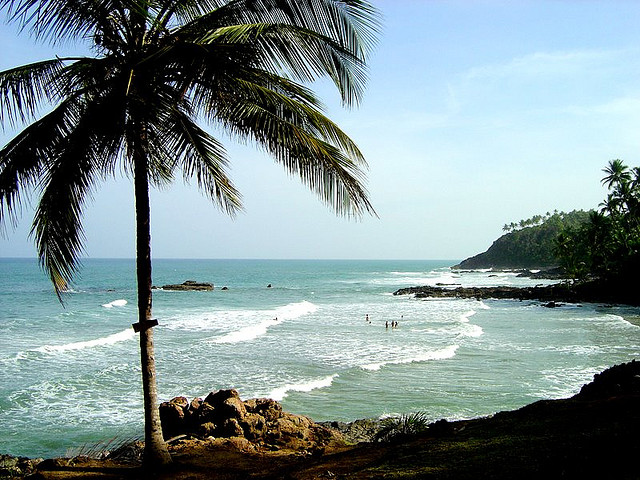 Laos has strings of beaches lined across the southern borders. Some beaches like Chaolao Beach have small resorts with spectacular views of the ocean. 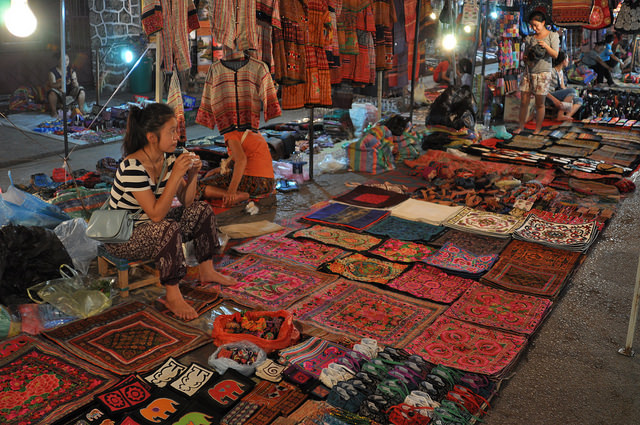 12. Go shopping at the night market

In the capital of Laos, Vientiane, a nightly flea market opens daily selling the best Laotian textiles and goods. Stroll by the wonderful assortments of wallets, scarves and flip flops at great affordable prices. While prices are cheap, you can still knock it down some by bargaining.

13. Kayak through the Nam Song River

In Vang Vieng, a peaceful Nam Song River is an oasis for kayakers to explore the area by boat. With no imposing dangers of rough water, man-eating wildlife or robberies (nearby towns have low crime rates), it’s perfectly safe to enjoy the beauty of the country with your guard down. 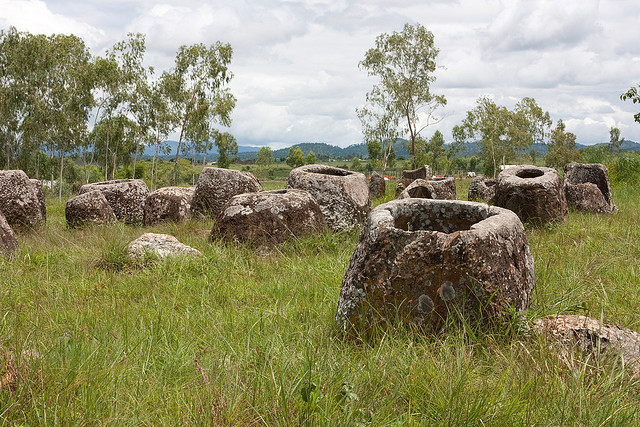 14. Explore the Plain of Jars

This megalithic phenomenon is an absolute must-see for visitors. The plain has thousands of stone jars scattered throughout the region and is believed to date back to 500 BC.. According to lore, these jars were used for prehistoric burial practice and cremation. Other theories believe they were used for storing salt and spices. Whatever they were used for (hopefully not as the world’s oldest toiletries), there’s no denying the fascinating feeling of seeing and touching ancient artifacts like this. 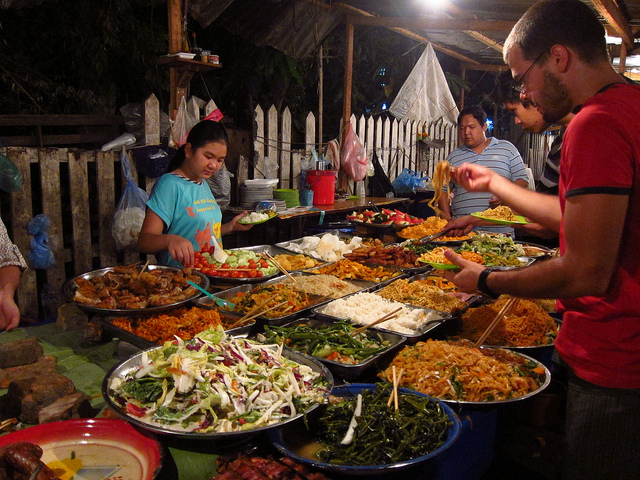 Whether you’re in the capital or smaller towns, please don’t opt for a cheeseburger or a milkshake catered to Western tourists. Instead, expand your horizon and explore the many wonderful flavors of Laotian cuisine. The wafting aroma of lemongrass, coriander and curries from the markets should have you sold anyway.