Mali is home to an indigenous group of people who stays true to their ancient culture and traditions. The Dogon people are not shy about sharing their colorful customs with outsiders, which is why tourists love to visit Dogon villages.

From adorned masks to astronomical beliefs, here are 15 things you didn’t know about the Dogon people of Mali.

Most of the ceremonies (dances) center around agriculture and death. Masked men will dance several days long to will their crops to grow or mourn their dead. In some of the dances, ceremonial rites, animal sacrifices, seed and grain offerings on the alter and mock battles are performed as an act of worship. 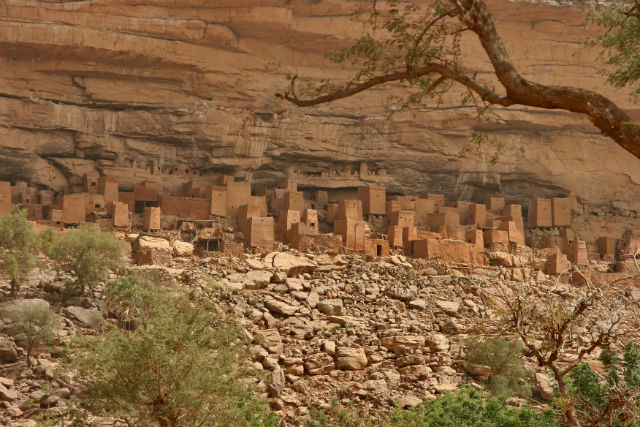 The main area that is populated by the Dogon is the Bandiagara Escarpment, a sandstone cliff that is up to 1,650 feet tall and stretches over 90 miles. Within the 90-mile radius, some live on top of cliffs, below the cliff or on the plains.

The key spiritual figures that the Dogons worship are the Nummo Twins. According to them, the Nummo are often described as amphibian-like, slow moving, upright, and change colors like chameleons. Some consider them to be representatives of the sun and androgynous. The Dogon believed that in ancient times, everyone was born with a twin and somehow stopped over time. The Dogons mourn the “loss” of their twins and claim to be “haunted” by them.

Depending on where the Dogon’s houses are (on top of cliff, in middle or on the plains), houses adapt to their location and reflect their ingenuity and philosophy. The gin’na (family house) is built on two levels and is built from banco. The houses are often windowless and often decorated with motifs to explain the family type living inside.

The Dogon people have ties to several languages including Fula and Bamana dialect, and are believed to be descended from Niger-Congo people. After the settlement in the Baraigara Escarpment, the Dogon developed the Toro So language. Toro So is their most popular language, but not every Dogon speaks it. Some converse in lesser known languages such as Jambay and Tommo So.

6. Refusal to convert to Islam

It’s believed that the Dogon people settled in the Bandiagara to escape Islamization in the 15th century. Those who refused to convert migrated to the cliffs along with other non-convert villagers and created the Dogon tribe. After refusing, many males members were murdered while women and children were sold into slavery by Islamic raiders.

Dogon people are heavily into sculptures of people, dogs, snakes and other figures. They are very versatile in their art and often use them in altars and near their homes, believing the sculptures will protect them.

Several researchers have reported that the Dogon people have advanced astronomical knowledge surrounding the star of Sirius. In 1946, French anthropologist, Marcel Griaule stayed with a Dogon wiseman for a few days and learned that they believed the existence of the ring of Saturn and the moons of Jupiter despite having no access to telescopes or advanced technologies. This phenomenon remains a mystery to this date.

A Hogon is a spiritual leader that is usually picked from the oldest male family member in the largest groups. During his first six months, the Hogon does not shave or wash himself, instead a female virgin takes care of him. The Hogon gives spiritual advice on fertility and performs marriage rituals.

Traditional Dogon funeral rituals are becoming rare and usually are only performed for tourists to earn money. Traditionally, in funerals, they dance while wearing masks believing the mask to be instrumental in guiding the spirits of the dead into the afterlife. The masks differ in each village and dancers can continue the dance for as long as six days.

Dogon people have several buildings for different purposes outside of a family home. Male and female Dogons have their own granary to store things that the opposite gender cannot access (such as female clothing and jewelry). A Togu’na building is only for men to enter and make important decisions for their village. Another house is built on the outside of the village for women to stay during menstruation. Dogons believe that menstruating women are unclean and will taint the village if they stay in.

In this Patriarchal tribe where every village is led by a male leader, polygyny is sometimes present (although not too common). Much like polygamy, polygny is a legal practice of where the man can take more than one wife (some report having up to four wives).

Because of Dogon’s spectacular knowledge of the universe without any man-made technologies, several theories about the Dogon people have arosed. One theory claims the indigenous people are affiliated with extraterrestrials. Some argue that it’s purely mathematical and dates back to ancient Egyptian astronomical systems. A book by Robert K.G. Temple was published explaining several of his theories. It has been disputed by several researchers and scientists, but the debate goes on.

Today, a significant number of Dogon practice Islam while others are Christians. The majority of Dogons stay true to their culture and traditions. It’s believe there are 400,000 to 800,000 Dogons left in the world.