While Africa is widely known for its big game animals, if you look under the leaves and in the water, you’ll find millions of other creatures — including lots of frogs. And as anybody who has ever camped outside in the African wilderness can attest, the frogs of Africa come in many unusual sizes and colors, and come alive at night to sing their songs. Here are 15 frogs you might find when venturing through Africa. 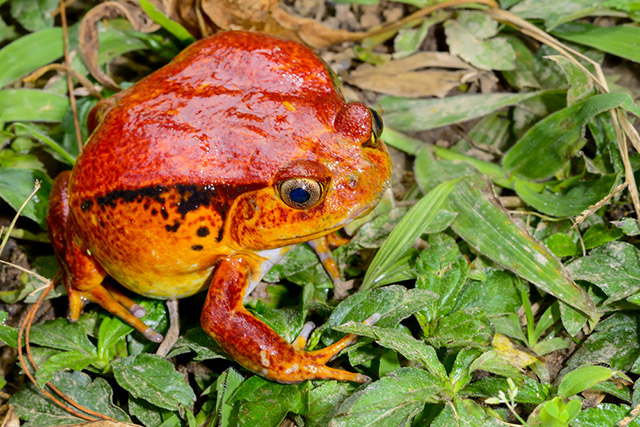 Can you see where this frog got its name? We thought so. This frog is endemic to Madagascar and not only is it bright red, it also puffs up when threatened. If a predator were to get this frog in its mouth, the frog would secrete a thick substance that causes the predator to release it. (Hint, it’s not ketchup.) 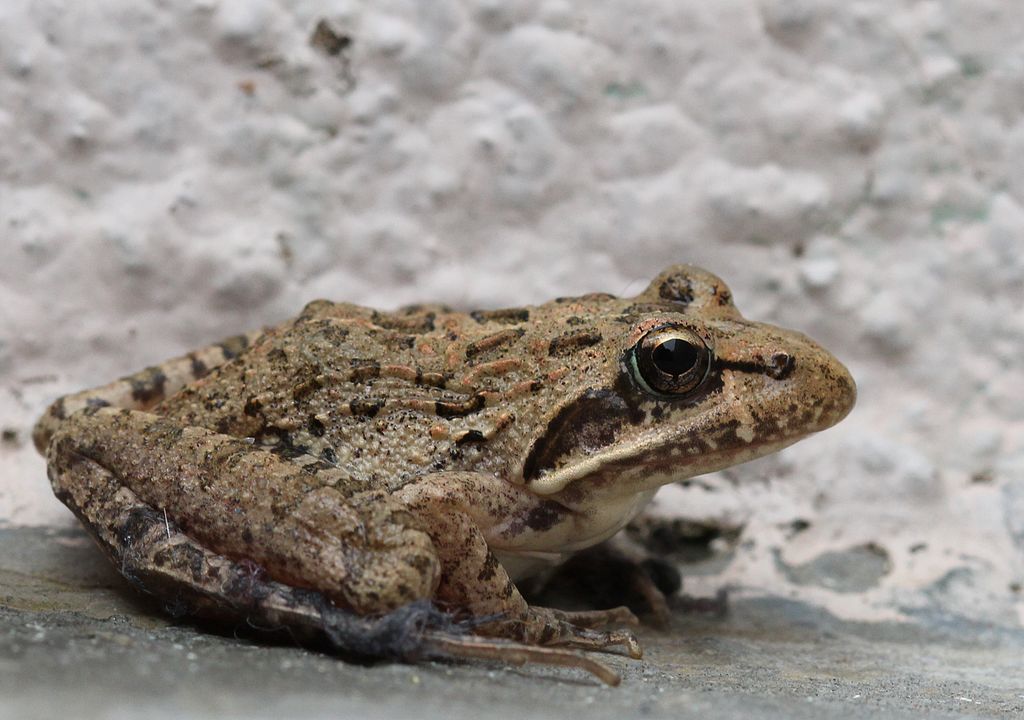 This frog is rather small and lives in a wide range of habitats across Southern Africa. You can find it in South Africa, Swaziland, Botswana, Namibia, and even the high altitude of Lesotho. 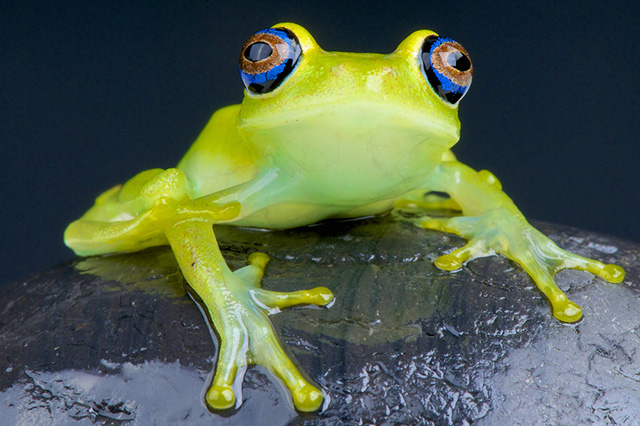 Endemic to Madagascar, these funny fellows usually dwell in tropical moist lowland forests and rivers. Although some of their habitat has been destroyed, they currently aren’t threatened. Their numbers probably owe to their crazy breeding habits — one pair can have over 150 eggs. And we’re pretty sure they’re related to Kermit the Frog, based on looks alone. 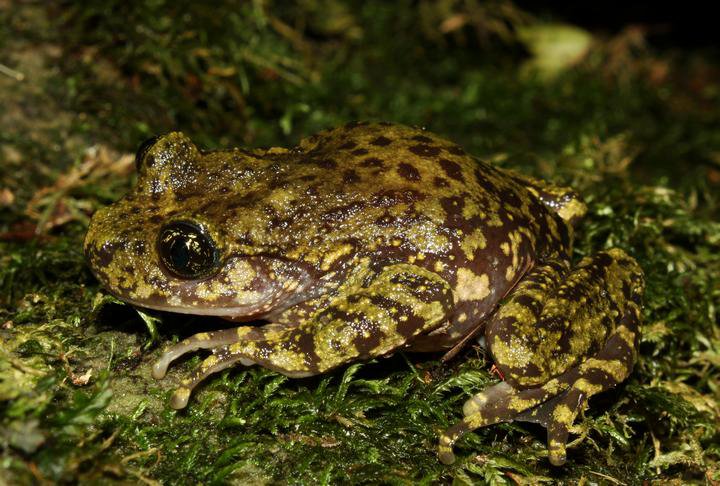 Despite its name, the Natal ghost frog is a fairly common species that inhabits the montane forests and grasslands of Southern Africa. You can find them in South Africa, Swaziland and Lesotho. Unfortunately, they are on IUCN’s red list of endangered species. 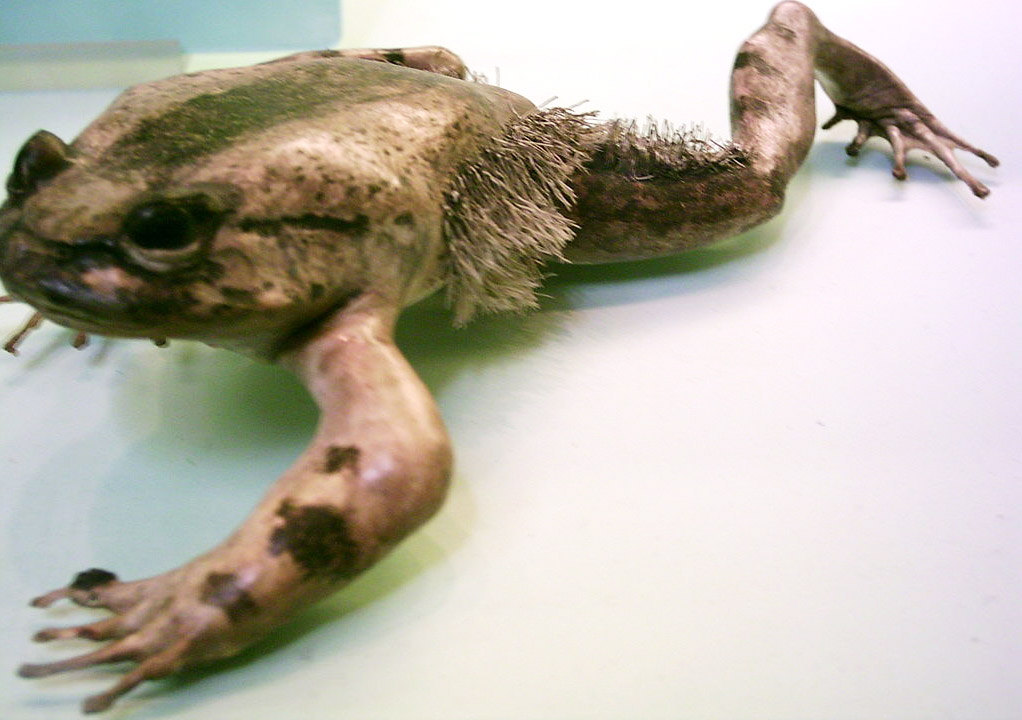 While it doesn’t have hair, the hairy frog (also known as the horror frog) has some protruding objects on its side that could definitely pass for hair. Although we think it should be named the bristle brush frog — it looks like it could do wonders for our dirty pans. These frogs can be found in many central African countries, including Nigeria, Gabon, Equatorial Guinea, DRC and Cameroon. 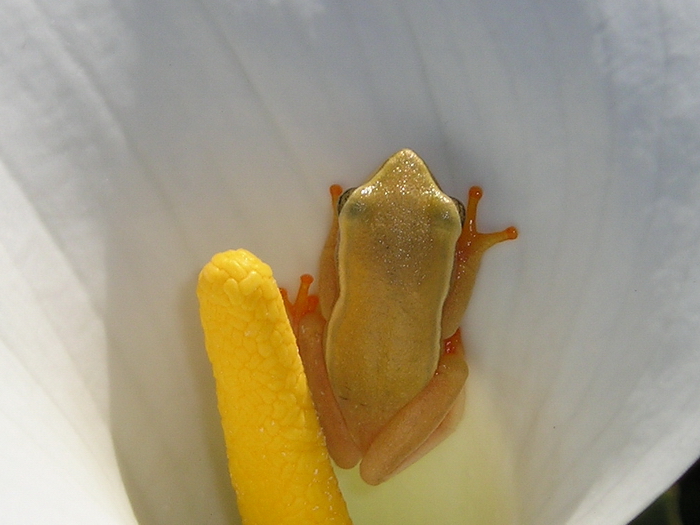 This colorful frog is a creamy yellow color and features bright orange feet, making it easier to spot than other frogs. It can often be found in arum lilies (where it gets it name) trying to catch polinating insects. The species is endemic to South Africa. 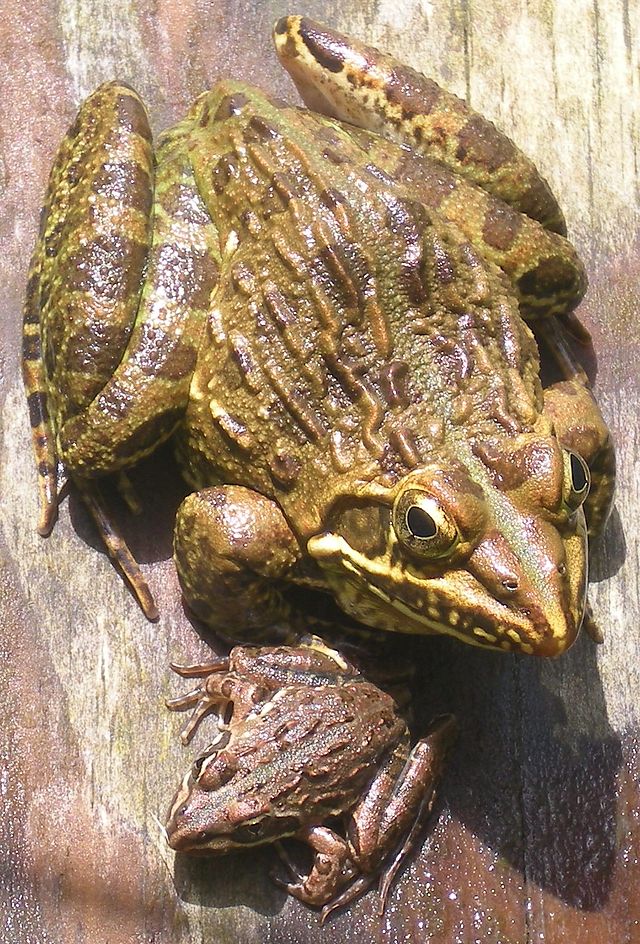 While it’s called the Angola River Frog, it can actually be found in many countries (its more common than other any frog on this list so far). Unfortunately, like many frogs, it’s threatened by habitat loss (not to mention crocodiles and snakes). 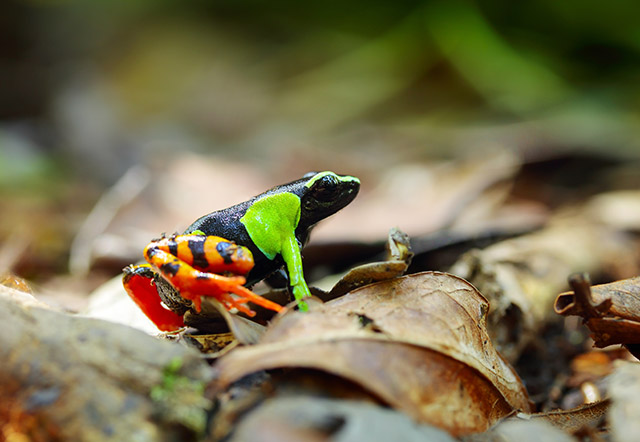 Why yes, it IS beautiful! Another colorful species endemic to Madagascar, this frog is highly sought after in the pet trade. It is usually inactive in the winter months but starts to breed like crazy when the spring rains arrive. It can also be found in red and gold. 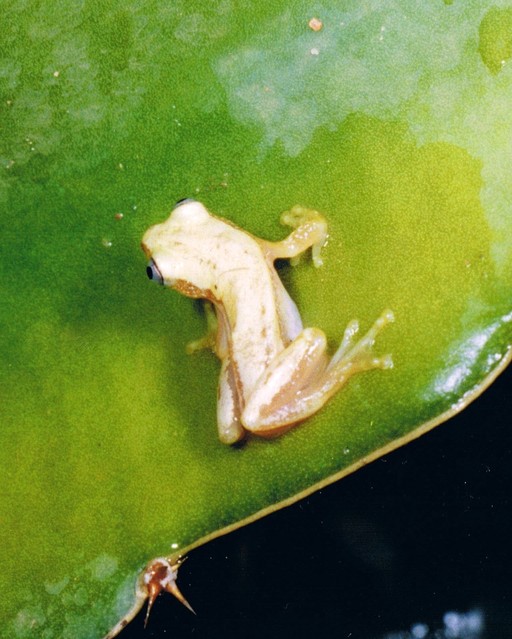 This frog bears little resemblance to an actual banana in shape, but shares the creamy yellow color. (We’ll get back to you later regarding whether it tastes like banana or not.) It can be found in Malawi, Mozambique and Tanzania, usually in wet grasslands and swamps. 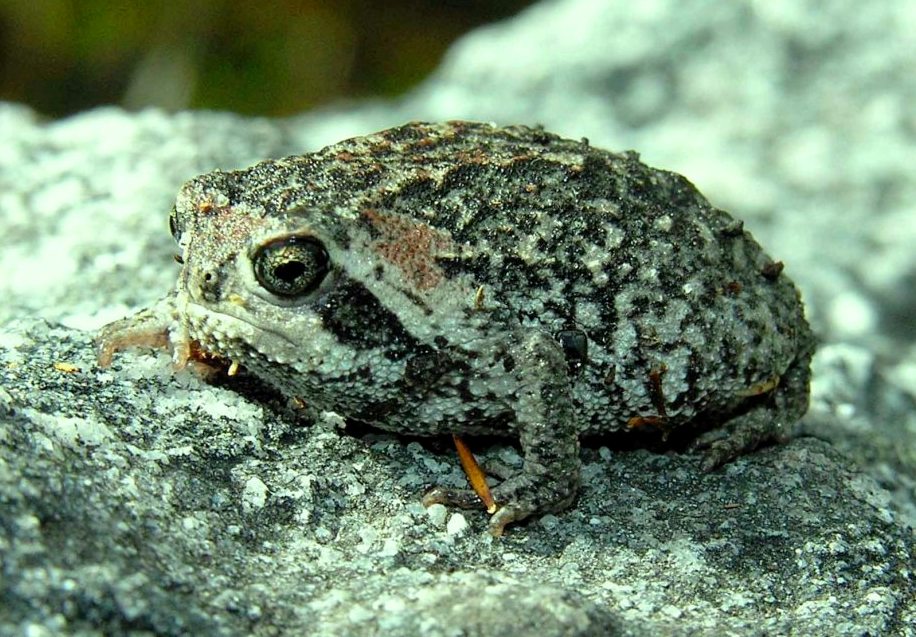 Endemic to South Africa’s mountains, this funny-looking frog somewhat resembles a toad and naturally blends in with many rocks. It also lives exclusively in the Fynbos Biome. When disturbed, it can inflate its body to outsize proportions and scare off predators. We’re scared just looking at it — look at that mug! 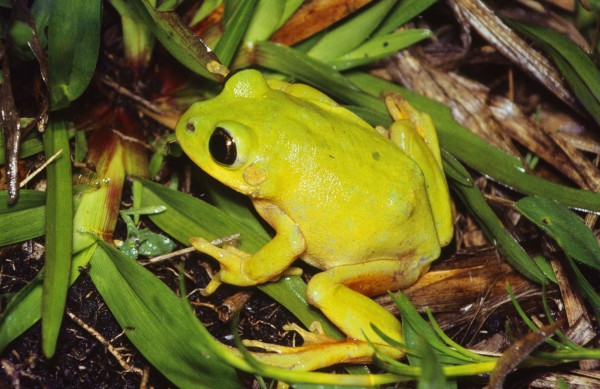 This frog gets its name from its extra-long fingers and toes. It is listed as endangered and it has a small range, being found only in the southern KwaZulu-Natal highlands of South Africa. 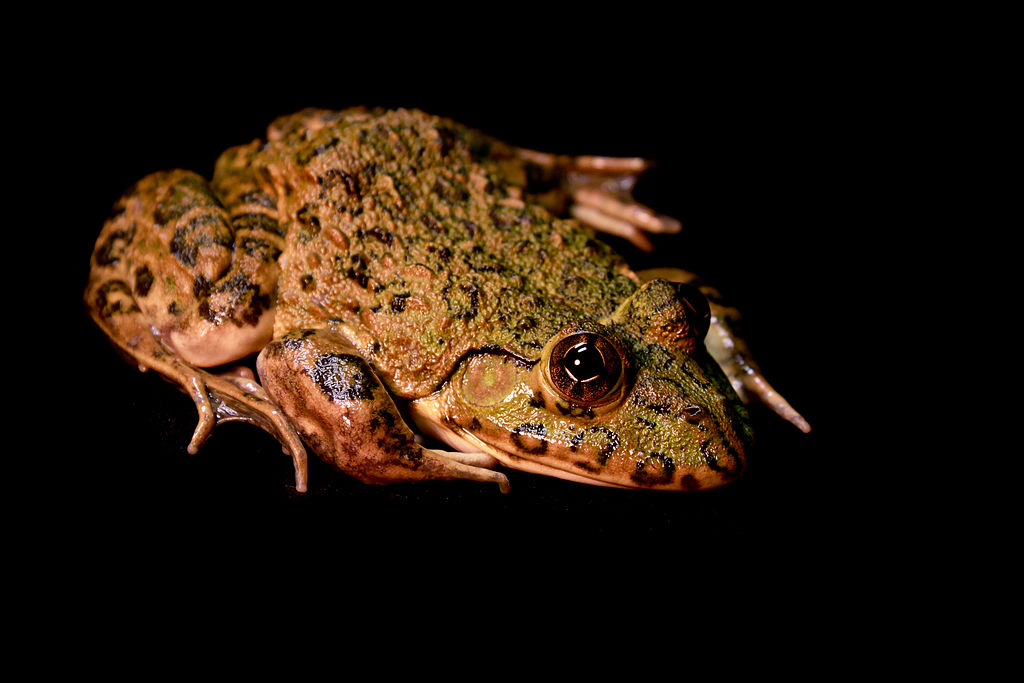 As one of the most common frogs in Africa, the crowned bullfrog can be found in subtropical, tropical, forests, savanna, and shrubland. If you are trying to sleep at night, it’s also one of the frogs most likely to keep you awake. Ribbit! 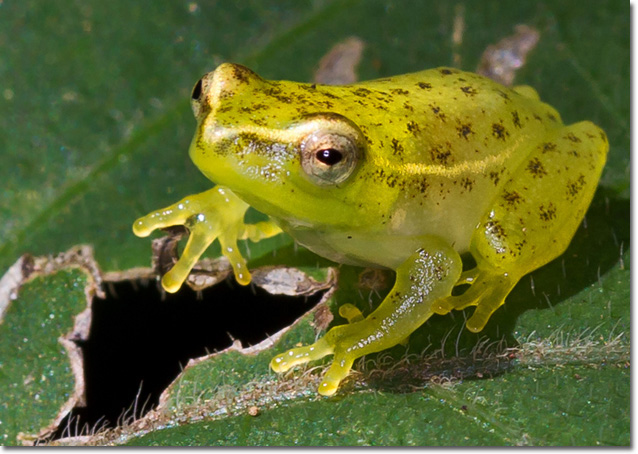 Endemic to a small area of KwaZulu-Natal spanning just nine square km (from Warner Beach to St. Lucia village), this cute frog is unfortunately critically endangered. If you see one of these, consider yourself lucky. 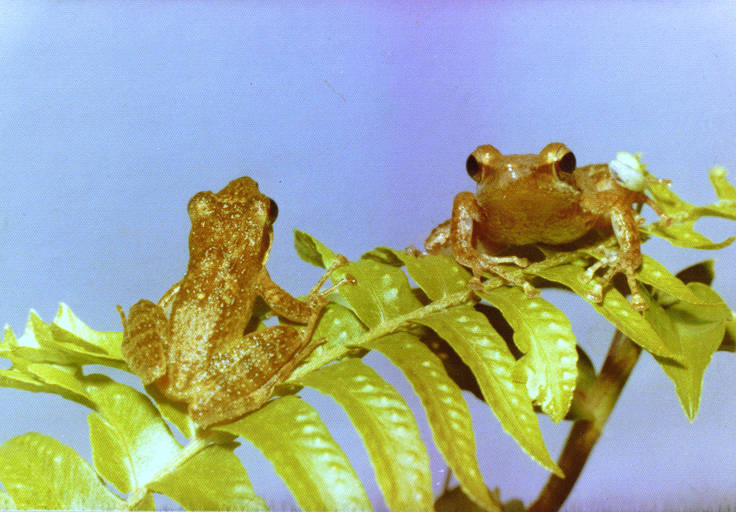 Also known as Boneberg’s frog or the Kloof frog, these frogs live only in southeastern South Africa, mostly around rivers. They are also rare and endangered, with habitat pollution decreasing their numbers every year. 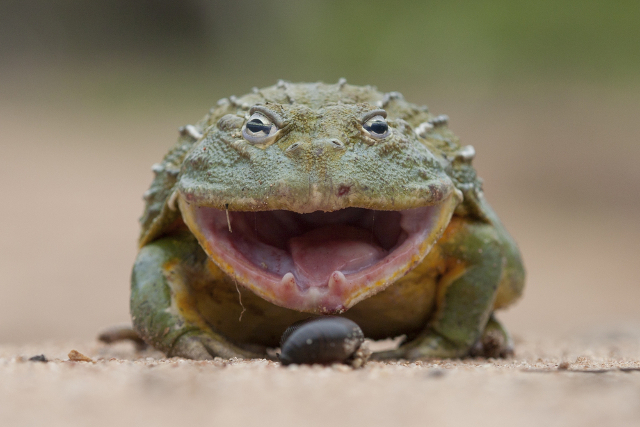 Last but not least is the giant African bullfrog. If you find one of these (and they are easy to spot), watch out, as they are known to be aggressive and will even bite when provoked. (Oh, you frog provokers, you!) They are also popular in the pet trade, and have been known to live for 35 years in captivity.