Birds of a feather flock together. Or at least in South Africa, they do. The southernmost country in Africa has so many protected wildlife parks and reserves for bird watchers — or birders, if you prefer — that it is one of the top destinations in the world for birding. From hooting owls to pecking penguins, here are the 15 best places to go bird watching in South Africa.

Situated in the northern province of Limpopo, Marakele National Park has mountains that makes you question whether you’re really in Africa or the Grand Canyon. Many birds like cape vultures and Bennett’s woodpeckers (above) can be sighted in this area (though no obnoxious laughing can be heard from this small bird).

You mean you can see wild penguins without freezing your socks off in the South Pole? Just head over to Boulders Beach and be blown away by the gorgeous landscape of serene waters and waddling birds in tuxedos. And yes, you can sunbathe and swim alongside of them (although we can’t promise you won’t be pecked).

This mouthful of a national park is home to namaqua sangrouse (try pronouncing that) along with hundreds of birds such as barn swallow, grey tit and pale-winged starling. The best time to go is between August and October, which is peak birding season. 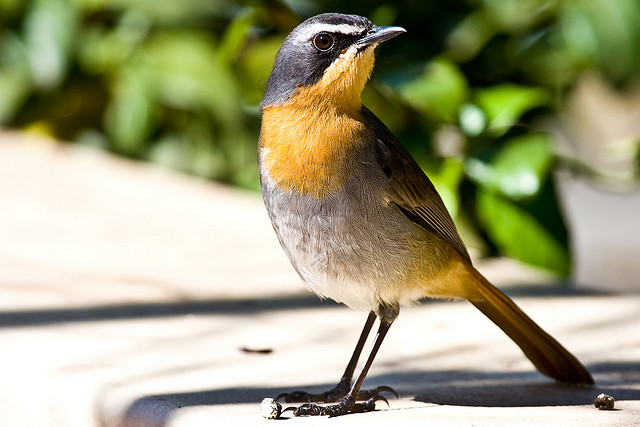 Because of this natural reserve’s immense number of flowers, many birds are attracted to its colorful landscape. When you’re done admiring the feathered creatures, it can’t hurt to stop by the coastline to look for whales or dolphins (if there are birds flapping around on the water, chances are, there are some sea creatures nearby). 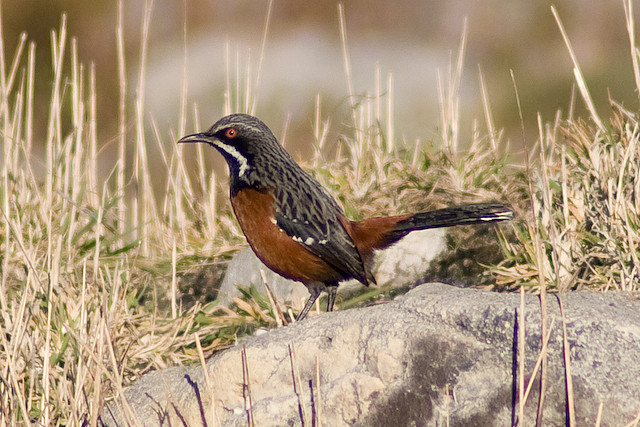 This mountain range near Cape Town’s coast is rich in wildlife (especially the birds). The Cape Rock Jumper (above) can be seen giving dirty looks to fellow birds. The birds on the receiving end of the jumper’s stink eye are probably shoebill storks or secretary birds. 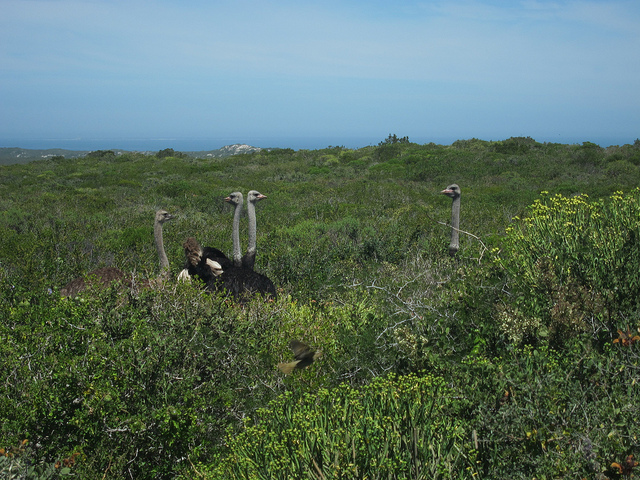 North of Cape Town is an untouched national park full of frolicking ostriches. It has been declared by BirdLife International as an Imporant Bird Area, so ornithologists, this is your cue to plan your visit. Not to mention, large groups of flamingos hang out in the lagoons, along with African oystercatchers and penguins. 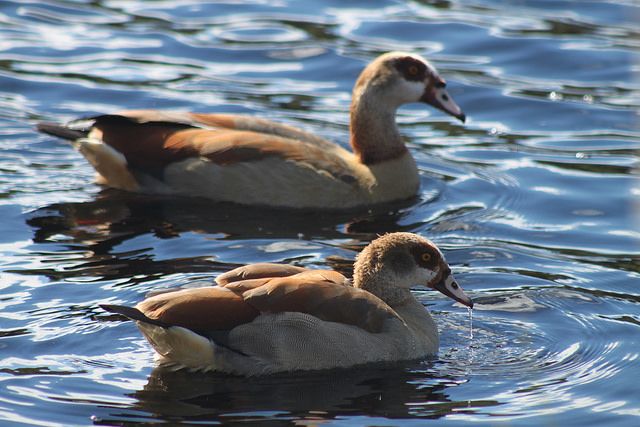 Home of the Cape of Good Hope, Table Mountain Park not only has lush vegetation and historical spots, but many winged creatures have taken a liking to it as well. Many birds from small Egyptian geeses (above) to giant ostriches wander wildly in this beautiful expanse. 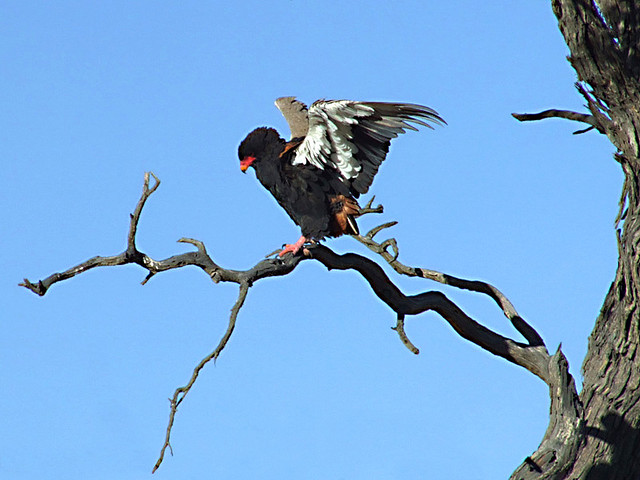 This desert is an excellent spot for bird lovers to get their fix. Several owl species, kestrels, falcons and Bataluer eagle (above) sit calmly from the highest tree and wait for any unsuspecting meerkat to wander by.

Declared as the oldest nature reserve in all of Africa and home to the largest population of white rhinos, it’s important to not overlook the fabulous birds of Hluhluwe Umfolozi Park. The most sensational sighting you can have at this park is of the secretary bird (above), which has super-strong legs and a nervous pace. 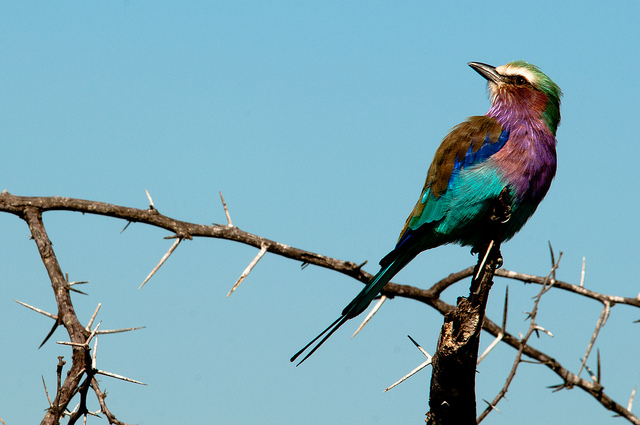 Lilac-breasted rollers aren’t afraid to flaunt their colors at Mala Mala Game Reserve (near Kruger Park). Although this park is private, you can book in advance for a guided safari to see the feathery critters in their natural habitat. Unfortunately, the price to stay at the lodge is not cheep cheep. 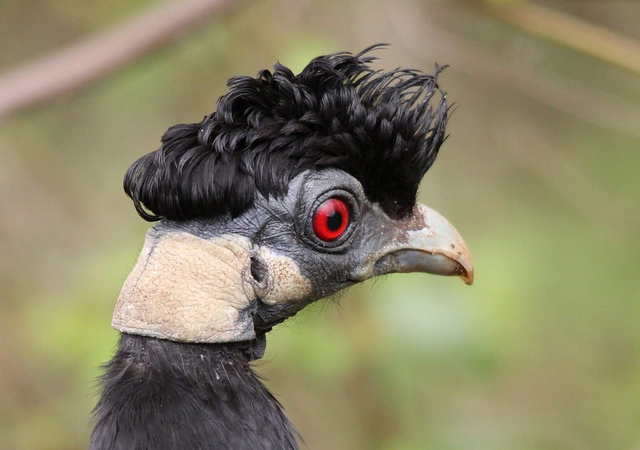 I know what you’re thinking … but despite what you may believe, this bird is not sporting an Elvis wig. He is the real deal. This crested guineafowl can be found serenading “Hunka Hunka Burning Love” to his fellow chicks throughout KwaZulu Natal province in southeastern South Africa. 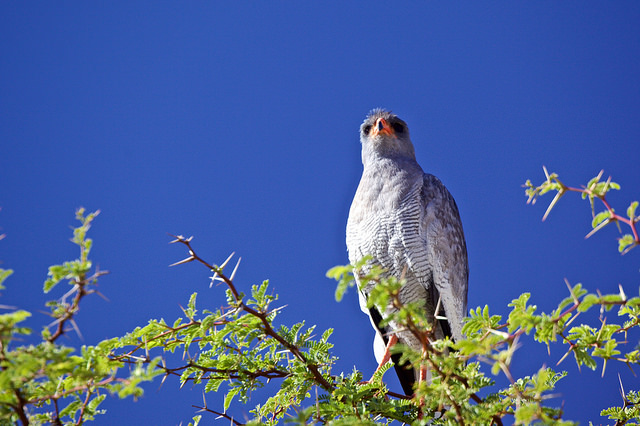 Home to red dunes an big sky, this park draws birds that thrive in its dry riverbeds. Predatory species such as buzzards, eagles and goshawk (above) circle around the sweltering hot sands to look for dehydrated and weak prey. If the unfortunate animals already bought the farm, it’s much easier for the birds to begin their feast.

South Africa’s most famous national park is home to countless birds of all colors and sizes. Levaillant’s cuckoo (above), the saddle-billed stork, the kori busard and the lappet-faced vulture along with many others will fly over you and make you feel like a character in a “Snow White” flick.  Be sure to book one of Kruger’s many available safari tours.

Near Kruger National Park lies another fantastic spot with an abundance of birds: Sabi Sand. Many vultures (pictured above) can be found perched on top of trees looking for a potential meal. This reserve has many lodges you can book to stay overnight, so you can get an early start and see the best at sunrise. After all, the early bird gets the worm. 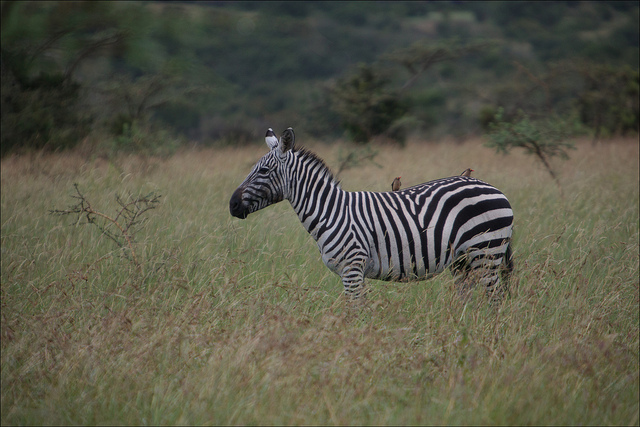 When there’s zebras, there will be birds. At Mountain Zebra National Park in Eastern Cape province you will find secretary birds, blue cranes and Ludwig’s bustards frolicking in the bush. Why not kill two birds (figuratively please ) with one stone and see both wild zebras and their winged friends?