According to recent research, Africa is growing by leaps and bounds as a MICE (meetings, incentives, conferencing and exhibitions) destination, with the concurrent rise in the number of state-of-the-art convention centres to meet this demand.

So if you are doing any kind of business travel in Africa, whether your field is finance, petroleum, mining or media, there is a good chance you’ll be spending time at a convention centre, either as an attendee or as a meeting organizer.

Here are a few of the best convention centres in Africa, from Calabar to Cape Town.

Located in the northern suburbs of Joburg, in the middle of Sandton’s business and entertainment district, the Sandton Convention Centre is a popular destination for conferences. It hosts events as diverse as Africa Energy Indaba, Retail World Africa and the Whiskey Live Festival. It can seat 4,500 patrons, has 13 meeting rooms, and the two exhibition levels have a combined space of 11,000 square meters.

With an anticipated opening date of February 2015, the Calabar Convention Centre is set to be one of the largest and most modern conference venues in Africa. The total floor space will be 35,000 square meters, including 21 conference rooms, three lounges, with a capacity to hold 5,000 guests.

As the permanent headquarters of the United Nations Economic Commission for Africa, this venue might be the most important of the large centres in Africa. Though it generally isn’t used for business meetings, it’s an impressive structure with 205,000 square meters of floor area and the inside space spreads over seven floors.

Also known as the Inkosi Albert Luthuli International Convention Centre, this venue has hosted several famous conferences such as the International Aids Conference and the Commonwealth Heads of Government Meeting. It has 7,000 square meters of space and a meeting room to accommodate 10,000 people.

As the tallest of the group, the KICC resides in a 28-story building (third tallest in Kenya) in the CBD of Nairobi. It has the largest conference chamber of its kind in East Africa with a capacity to hold 5,000 people. It also has an impressive 225,000 square meters of floor space. 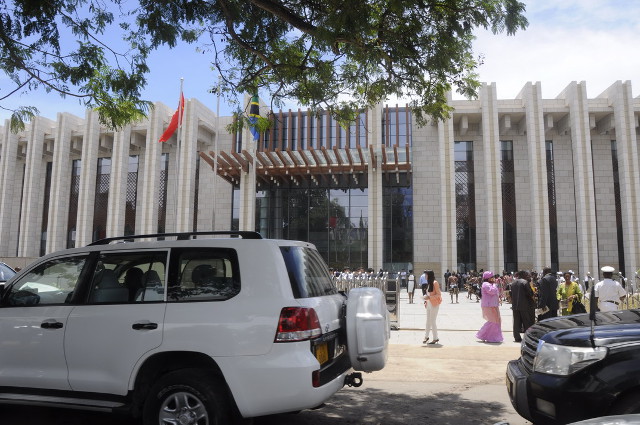 Located in the largest city and business centre of Tanzania, the JNICC is home to many conferences that relate to the southern tourist circuit of Tanzania. It can seat over 1,000 people in its auditorium and has close to 2,000 square meters in total space. 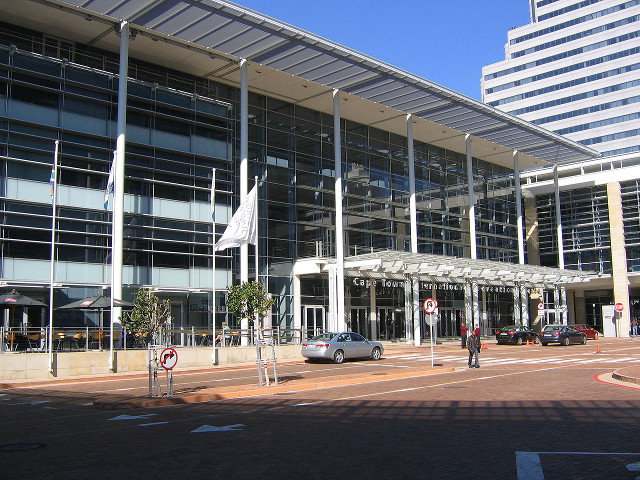 Only open since 2003, CTICC has hosted numerous high-profile events such as the final draw for the 2010 FIFA World Cup South Africa, which featured Nobel Peace Prize winners Desmond Tutu and F.W. de Klerk. It has 121,000 square meters of space, and an expansion set to begin in February 2015 will add an additional 10,000 square meters.

AICC is 100% owned by the government of Tanzania and is the leading conference venue in the country. Some of the major tenants include the United Nations International Criminal Tribunal for Rwanda and the East African community. It has 10 meeting rooms, the theater can host 1,313 people, and the total space is 5,420 square meters.

This convention centre is the largest in Egypt and is located in the bustling Cairo CBD. The main auditorium can accommodate up to 2,500 people and there are five exhibition halls with a total space of 20,000 square meters.

Rounding out our list is the largest convention centre in South Africa and one of the best known landmarks in Joburg. The JEC is home to several big shows such as The Rand Show, Automechanika, and the Joburg Motor Show. The multipurpose exhibition halls have over 50,000 square meters of space with an arena that can accommodate up to 20,000 people. If you need a massive place to host your conference, it’s hard to go wrong with the Expo Centre.