Offering some of the world’s least crowded and most varied surfing conditions, South Africa is a great place to catch a wave. While Supertubes at Jeffreys Bay is the country’s — and perhaps even the world’s — most famous wave, there are plenty of alternative spots to ride for beginners or experts. Surf is best from April to July. The following are 15 awesome South African surfing spots between Cape Town and Durban, in no particular order. 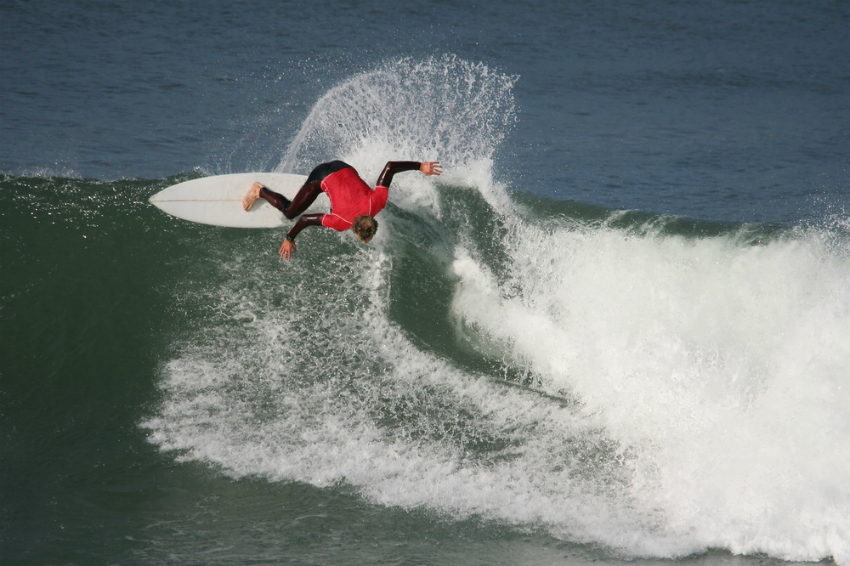 Located on the Sunshine Coast between the Garden Route and the Wild Coast, Jeffreys Bay and its main squeeze, Supertubes Beach, has been the quintessential South African surf spot since the beginning. When it’s going off in winter, Supertubes can be better than a three-minute ride from the put-in at Boneyards to the end. The Billabong Pro ASP World Tour surfing event is held here annually in July.

It isn’t exactly hot, but compared to Cape Town and even the Garden Route, the water around Durban can be considered warmish and subtropical. The city is known for its long surf beach — waves are best at the northern end — and it also has shark nets. It’s a good place to learn.

This beautiful small bay is located near Wilderness about halfway down the Garden Route. It has a fun right-hand break in the early mornings or when northwest or light southwest winds are blowing. It is best surfed at medium high tide, and has a swell between two feet and eight feet depending on wind and tide.

The Cape Peninsula has fantastic surfing possibilities, from gentle shore breaks that are ideal for beginners to monsters made for experts only. In general, the best surf is along the Atlantic side, and there is a string of breaks from Bloubergstrand through to the Cape of Good Hope. Most of these breaks work best in southeasterly wind conditions. Ask around at Cape Town surf shops.

Although most people just transit through the Sunshine Coast town of East London, if you are a surfer, it is worth making a pit stop to check out the waves on the long surf beach. With left and right breaks, it is a good place for beginners, although it has had some issues regarding shark attacks.

Near the eastern edge of the Garden Route is an archetypal South African beach town with a fickle surf break known by locals as Plett. When an east or west well is combined with rare northwest or northerly wind, it offers a rare (for South Africa), very classic beach break (think California).

Once known as the Transkei homeland, the region now known as the Wild Coast is where Nelson Mandela was born and buried. He spent much of his childhood in the village of Qunu, 31 kilometers south of Umtata. The Wild coast has some of the world’s fastest-flowing currents as well as some excellent protected right point and beach breaks. There is good surfing around Coffee Bay and Cintsa, which are both serviced by South Africa’s backpacker service, the Baz Bus, and are home to backpacker hostels. 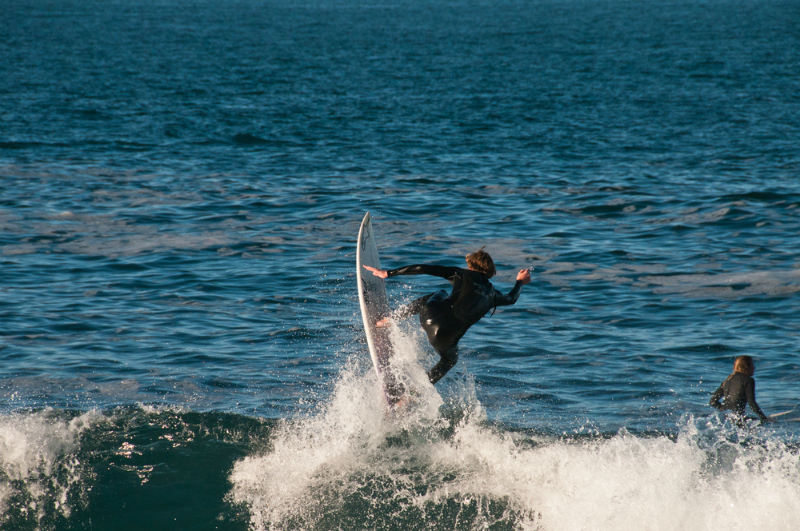 On the Garden Route, the Mossel Bay Peninsula offers no less than five excellent and consistent quality reef and point breaks. There are secret wave possibilities to be found in the area. Check with locals about conditions and you could end up surfing waves that many people, including South Africans, only dream of.

On the western edge of the Garden Route close to Cape Town is a locally loved right-point break at Still Bay Reef — but note the water is really cold. When conditions are right it is a long wave that doesn’t hold a massive swell (tops out around four to six feet) but it does have a strong rip.

Located just 11 kilometers west of Still Bay on the western edge of the Garden Route, this is another local favorite. It is a right-breaking wave that wraps into a small beautiful bay. Early mornings are best to try as it isn’t always going off, but when it does, it can be huge. 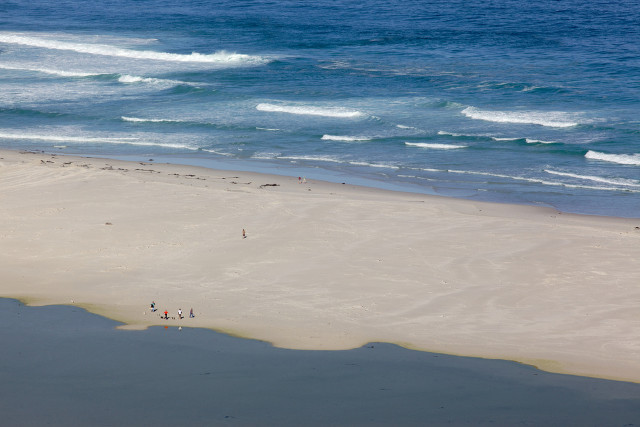 The clue is in the name – this is a long sandy beach that is very popular with surfers. The wave breaks both to left and to the right, which gives opportunities for natural (right-leg dominated) and goofy (left-leg dominated) footers. It’s suitable for more experienced surfers. 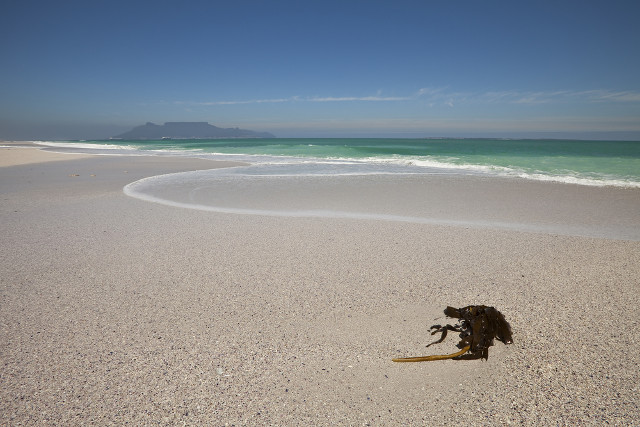 A popular spot for surfers of any level, this beach is about 30 minutes from the centre of Cape Town by car. It caters for beginners on days when the surf is less high, and is best for the experienced surfer when the east to south-east wind is blowing, resulting in bigger waves. There’s a coffee shop across the park enabling you to recharge your energy levels. 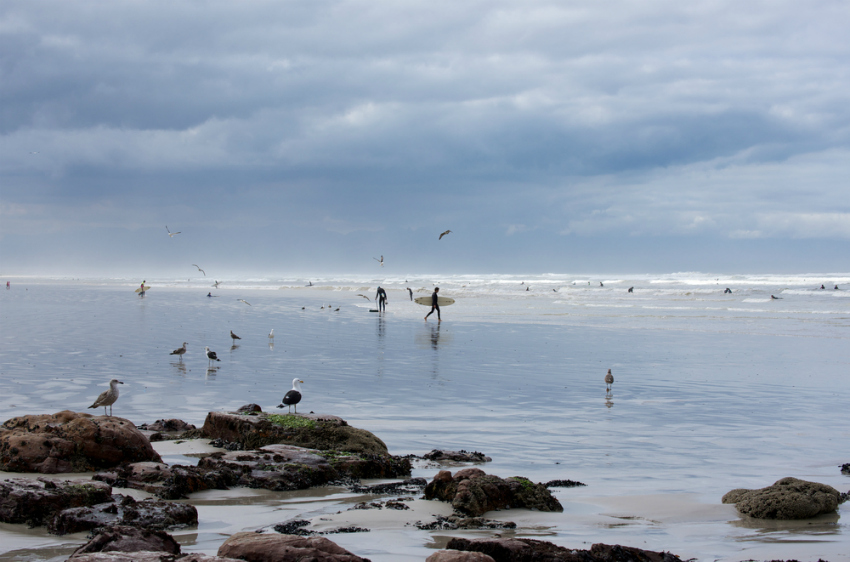 This is an excellent beach for long boarders. You’re advised to have an early night and get into the waves early in the morning, before the sun is high in the sky and a south-easterly wind starts blowing. In winter, when the north-westerly wind sets in, you’ll need to hire a wetsuit. There are three local surf schools if you want to learn how to surf. 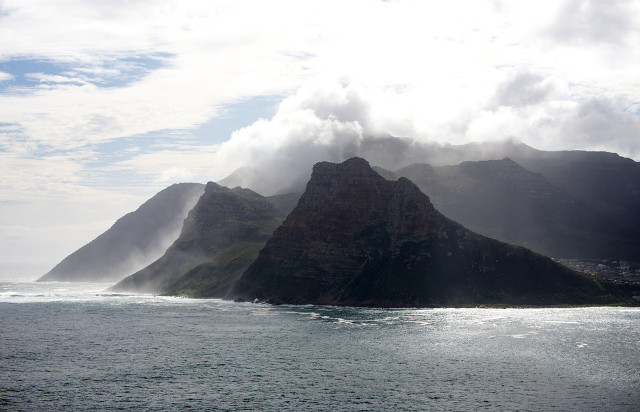 Known for its monster waves, this is a spot best surfed in the winter storms, where swells can reach between 15 and 30 feet on the break. The water is cold, so you’ll need a wet suit. And nerves of steel. This is not for amateur surfers, you’ll need to be on top of your game. 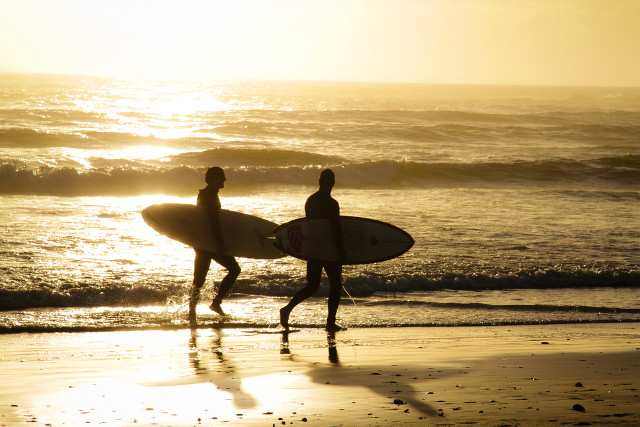 The coastline around Durban has excellent year-round conditions and — joy of joys — warm water. The wave action here is fairly consistent throughout the year, and the locals are friendly, so long as you observe a bit of etiquette.